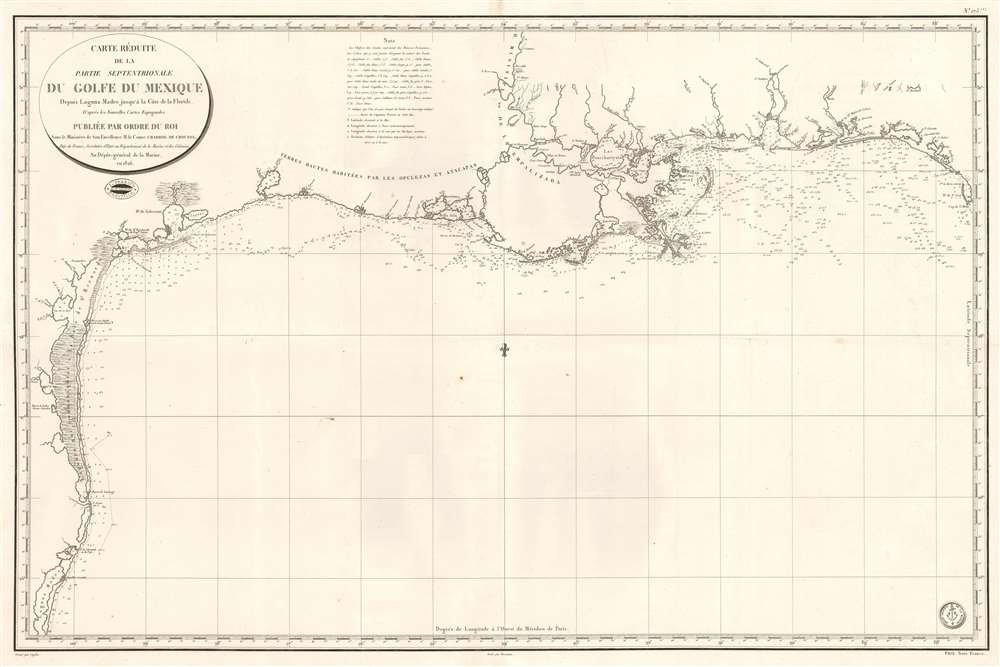 This is an 1826 French Dépôt de la Marine nautical chart or maritime map of the Gulf Coast of the United States. The map depicts the coast from the Laguna Madre in modern-day Texas to Saint Joseph Bay (Be. de St. José), near modern-day Panama City, Florida. Limited but finely engraved coastal detail appears throughout. Bays, lakes, and rivers are illustrated, among them Galveston Bay, Lake Pontchartrain, the Mississippi River, and its delta, Mobile Bay, and Pensacola Bay. Named cities include Pensacola (Penzacola), Mobile (Movila), and New Orleans (Nle. Orléans). The publication of this map in France, which is based upon earlier Spanish charts, reflects renewed and growing imperial interest in the New World on the part of France.

French citizens began immigrating to Mexico as early as 1700 despite the Spanish ban on all foreign settlement in its New World colonies. French expatriates were allowed to settle in Mexico because of the Family Compact between France and Spain, signed by the two countries after French King Charles X installed his grandson Philip V, as King of Spain in 1700. Nonetheless, French immigrants to Mexico had to meet specific requirements, such as mastery of a unique and useful trade. French immigration to Mexico surged after 1821, when Mexico gained its independence. The French established colonies and encouraged settlement in Mexico, with an estimated 6,000 French expatriates living in Mexico by 1860. French citizens were increasingly unwelcome in Mexico and began complaining about their treatment. Many describe being unfairly taxed and forced to take out usurious loans, among other issues. French immigrants were moreover denied land ownership, a law that applied to all foreigners in Mexico, not just French citizens. These complaints directly influenced the First French intervention in Mexico in 1838 - 1839 and the subsequent French invasion of 1861 - 1867, when France installed Emperor Maximilian I in Mexico. Maximilian's time as Emperor of Mexico ended in front of a Mexican firing squad.

This map was engraved by Jean-François Caplin with lettering by J.P. Besançon and published by the Dépôt de la Marine in 1826. Two examples are cataloged in OCLC and are part of the institutional collections at the University of Alabama and the University of Texas at Arlington.


J.P. Besançon (fl. c. 1798 - 1835) was a French engraver who specialized in lettering. Besançon began engraving nautical charts for Charles-François Beautemps-Beaupré (August 6, 1766 - March 16, 1854) in 1802. He engraved eighty-three maps for Beautemps-Beaupré, then the hydrographer in chief, between 1802 and 1831, when he handed off the work to J.M. Hacq. Little else is known about Besançon's life and career. Learn More...