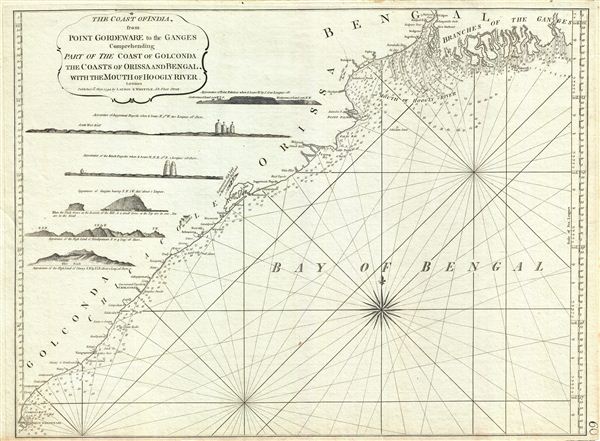 This is a fine example of Laurie and Whittle's 1794 nautical chart or maritime map of the Golconda Coast, the coast of Orissa and Bengal and the mouths of the Hooghly River, northeastern India. It covers from the mouths of the Ganges River as it empties into the Bay of Bengal, south as far as Point Gorgeware (Godavari Point) and Corigna Bay. Along the left border, the map includes six coastal profile views detailing Point Palmiras, Jaggernaut Pagoda (Jagannath Temple), the Black Pagoda (Konnark Sun Temple), Ganjam, the highlands of Bimilipatnam (Bheemilipatnam), and the highlands of Panary. The Jagannath Temple and the Konnark Sun Temple are two of the most renowned temples in India and important pilgrimage destinations Hindus. Laurie and Whittle also note the site of the 1766 Falmouth shipwreck.

Further north, The Hooghly River, one of the most important trade and transport arteries during the colonial era, and the reason the British chose to settle in Calcutta, was witness to several battles. Perhaps the most important being the Battle of Plassey of 1759, where the British East India Company defeated Nawab of Bengal and his French allies, leading to British rule in Bengal, and eventually the entire subcontinent. Also of note, the Gahirmata Beach (near Point Palmir and Kannaka marked here), is the world's most important nesting beach for the Olive Ridley Sea Turtles.

The map offers rich detail including countless depth soundings, notes on the sea floor, commentary on reefs, rhumb lines, sandbars, shoals, pagodas, place names and a wealth of other practical information for the mariner. This map was published by Laurie and Whittle from their offices at 53 Fleet Street, London, on May 12, 1794. It was issued independently as well as offered in their 1797 East-India Pilot, or Oriental Navigator.