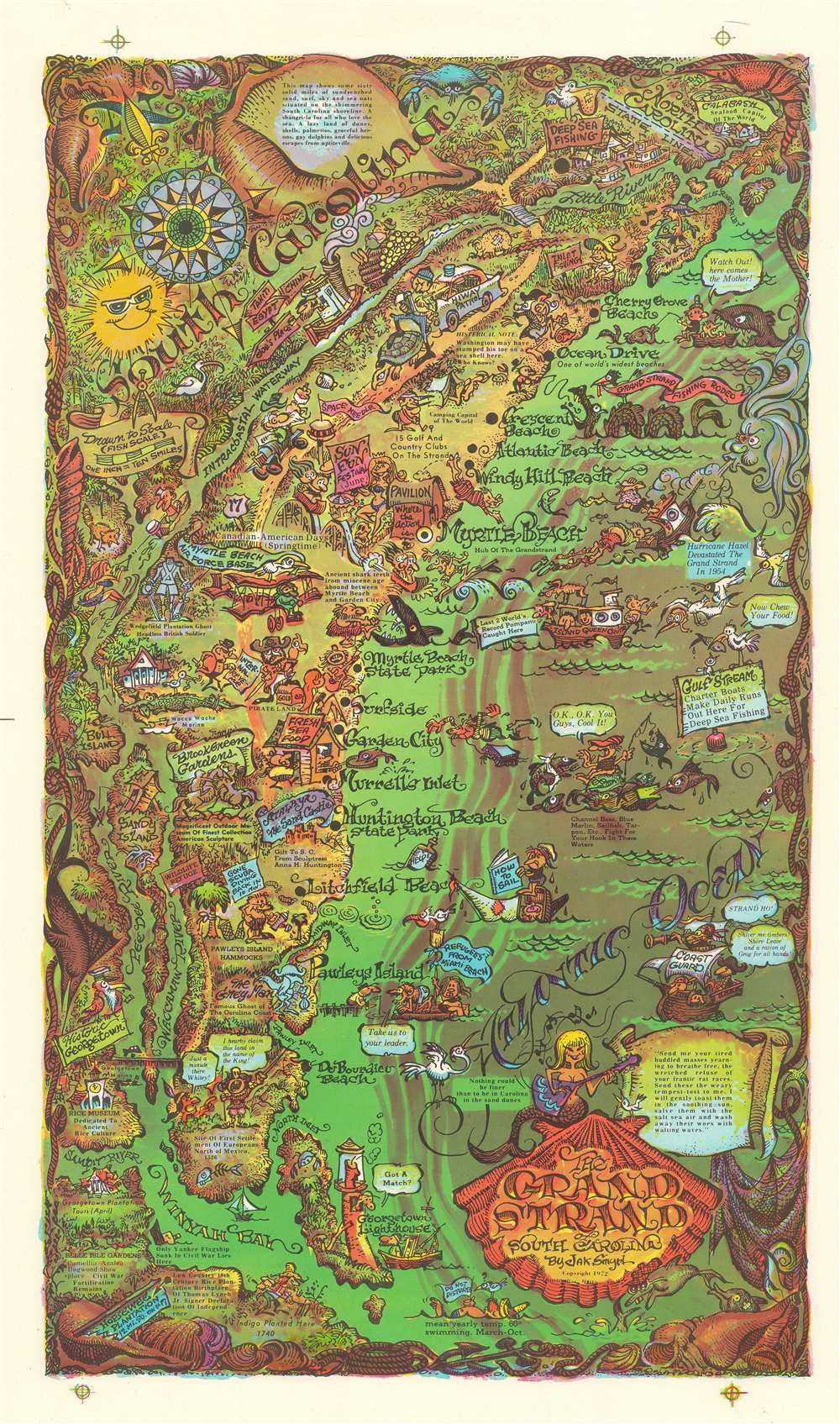 This is a 1972 Jak Smyrl pictorial map of the Grand Strand, a sixty-mile stretch of South Carolina coastline known for its beautiful beaches and fantastic weather. Myrtle Beach, a haven for college students and families alike all year round, is the most well-known tourism center. Identified as the 'Hub of the Grandstrand' on the map, Myrtle Beach's amusement park and 'Sun Fun Festival' are promoted. Comic vignettes and notes populate the rest of this amusing piece. The 'hiway patrol' writes a ticket for a slow-moving turtle, while tourists from all over go fishing off the coast. People lounge on the beaches and surf, while others sail (or try to). The Georgetown Lighthouse appears near the bottom border, although it is suffering technical difficulties since its candle has gone out. Smyrl even includes some historical notes, including where indigo and other plantations were, along with the possible site of the ill-fated Spanish settlement from 1526 near Winyah Bay.

This map was created and published by Jak Smyrl in 1972. We note a single cataloged example which is part of the David Rumsey Map Collection.

Oscar Jackson 'Jak' Smyrl (May 5, 1923 - August 7, 2007) was an American cartoonist and artist. Born in Camden, South Carolina, Smyrl enjoyed the arts from a young age. He graduated from Camden High School and attended Alabama Polytechnic Institute (Auburn University) before volunteering for the U.S. Marine Corps and serving in the Pacific during World War II. He saw combat on Pacific islands and served during the occupation of North China. He drew throughout his time in the Marine Corps and created drawings for friends to keep up their morale. After returning from the Pacific, Smyrl attended the Art Institute of Pittsburgh and the University of South Carolina, where he took art classes and contributed to campus publications. He left school during his senior year to become a staff artist for The State, a newspaper in Columbia, South Carolina. This is when he dropped the 'c' from his name, stating that he was just a poor artist and couldn't afford a 'c'. He worked for The State for thirty-seven years and illustrated hundreds of other projects, including dozens of books. He is credited with being the first person to illustrate the University of South Carolina logo with the gamecock in a fighting stance. He was married to his wife Betty Spires Smyrl for forty-nine years, with whom he traveled the world. Learn More...