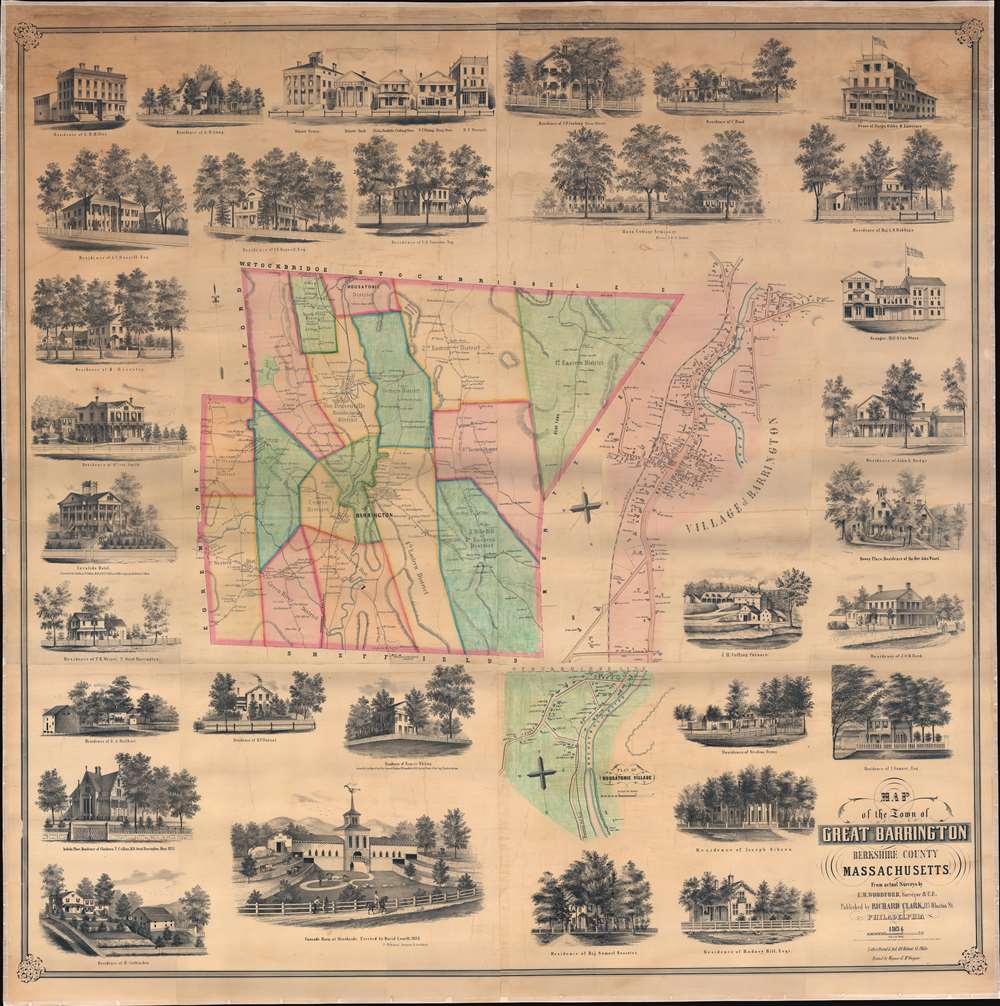 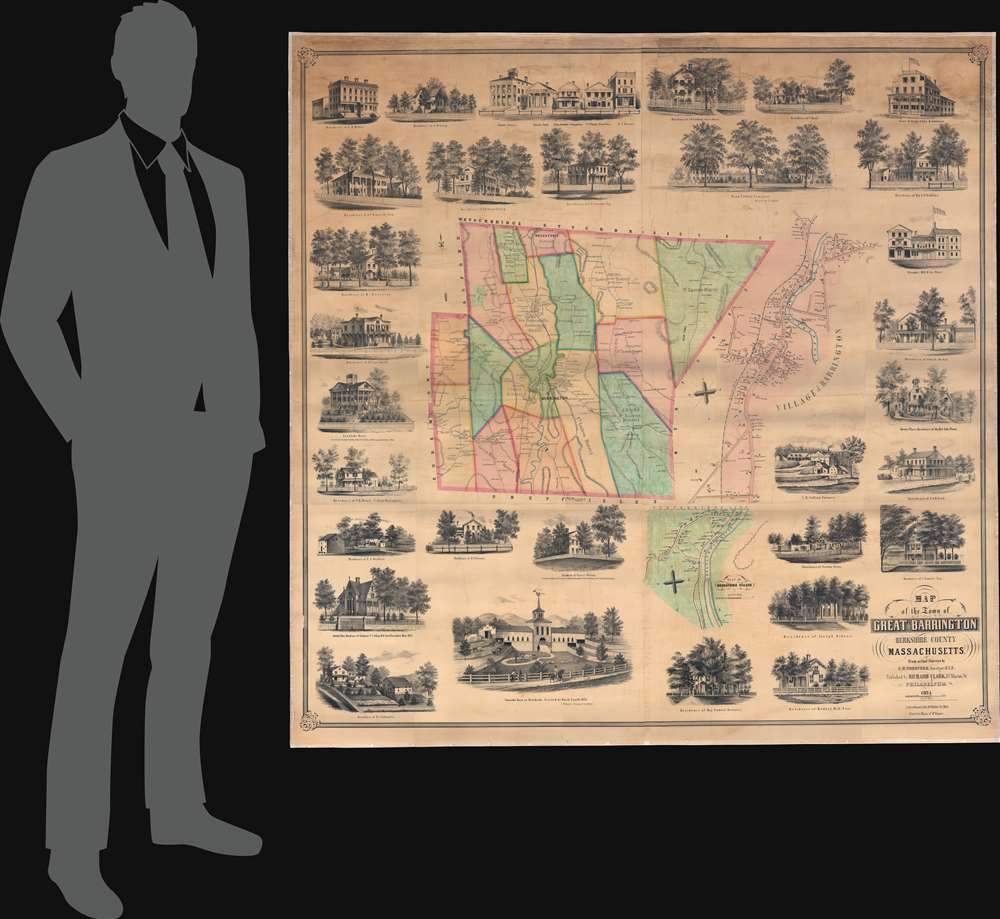 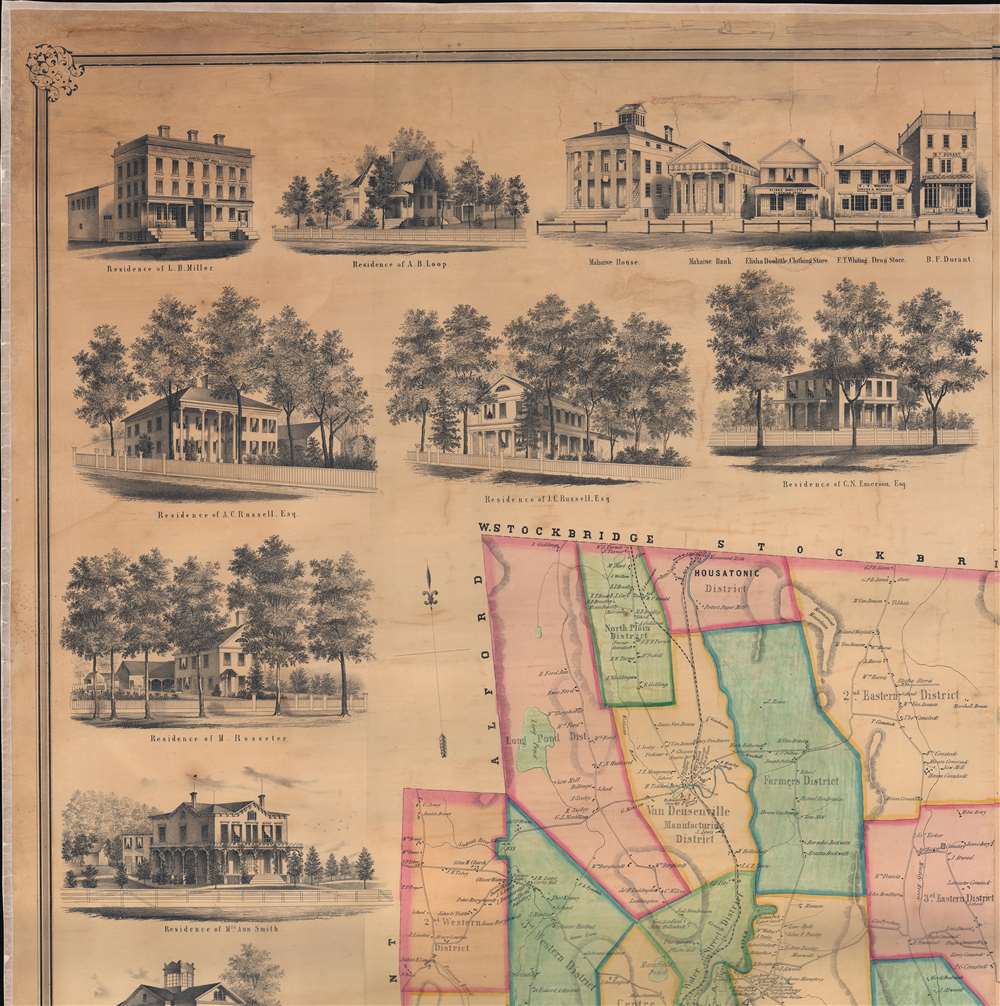 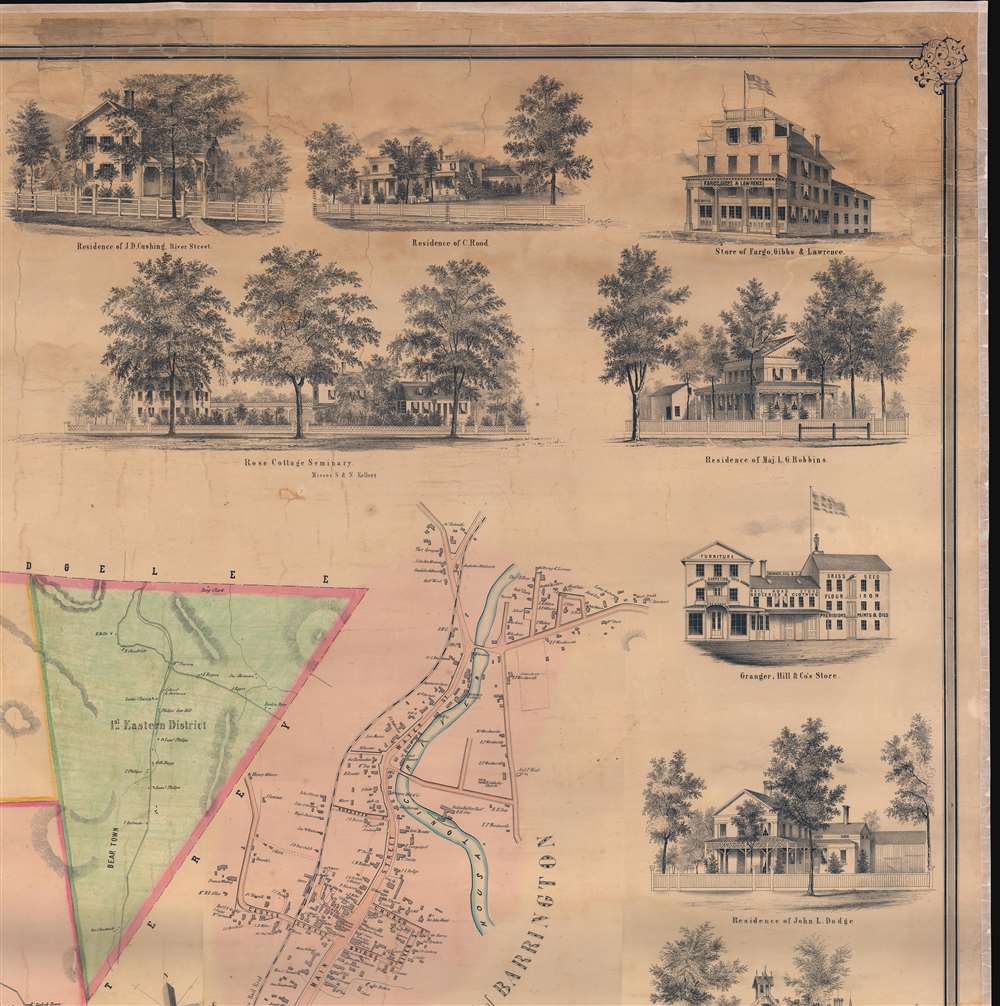 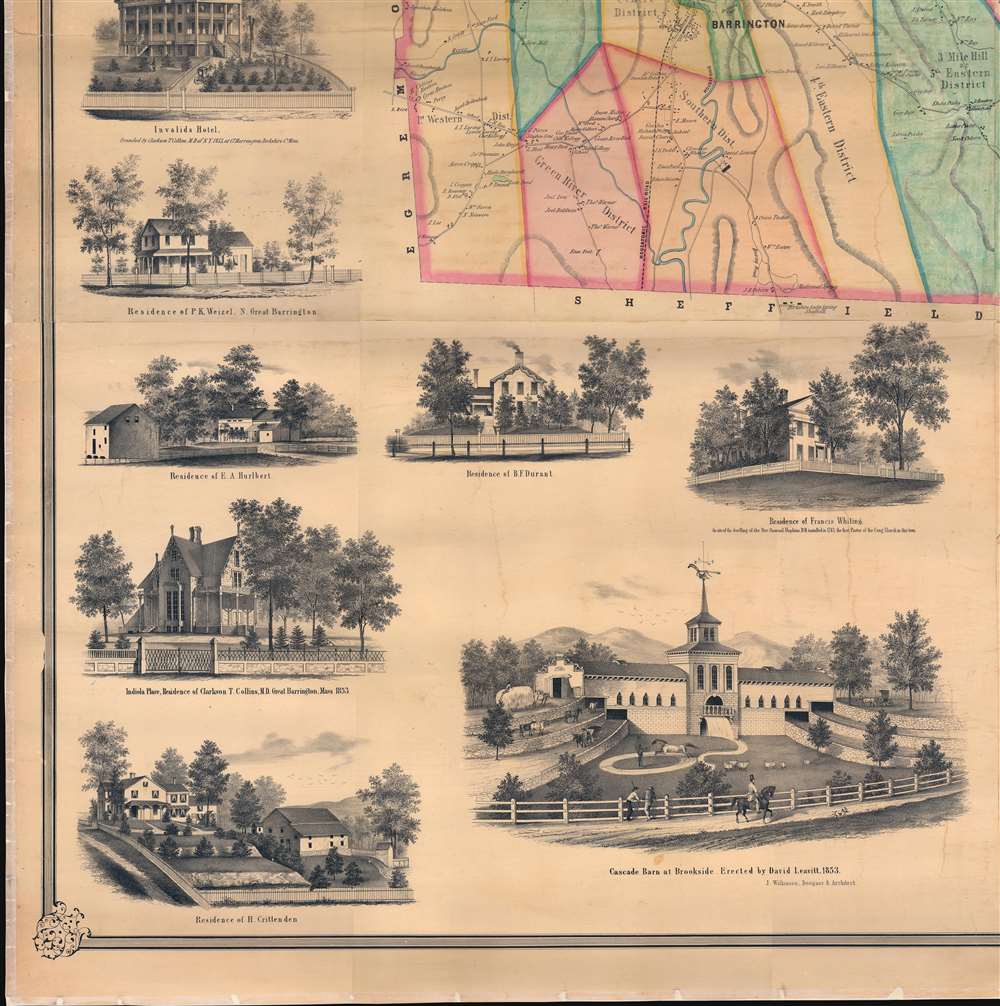 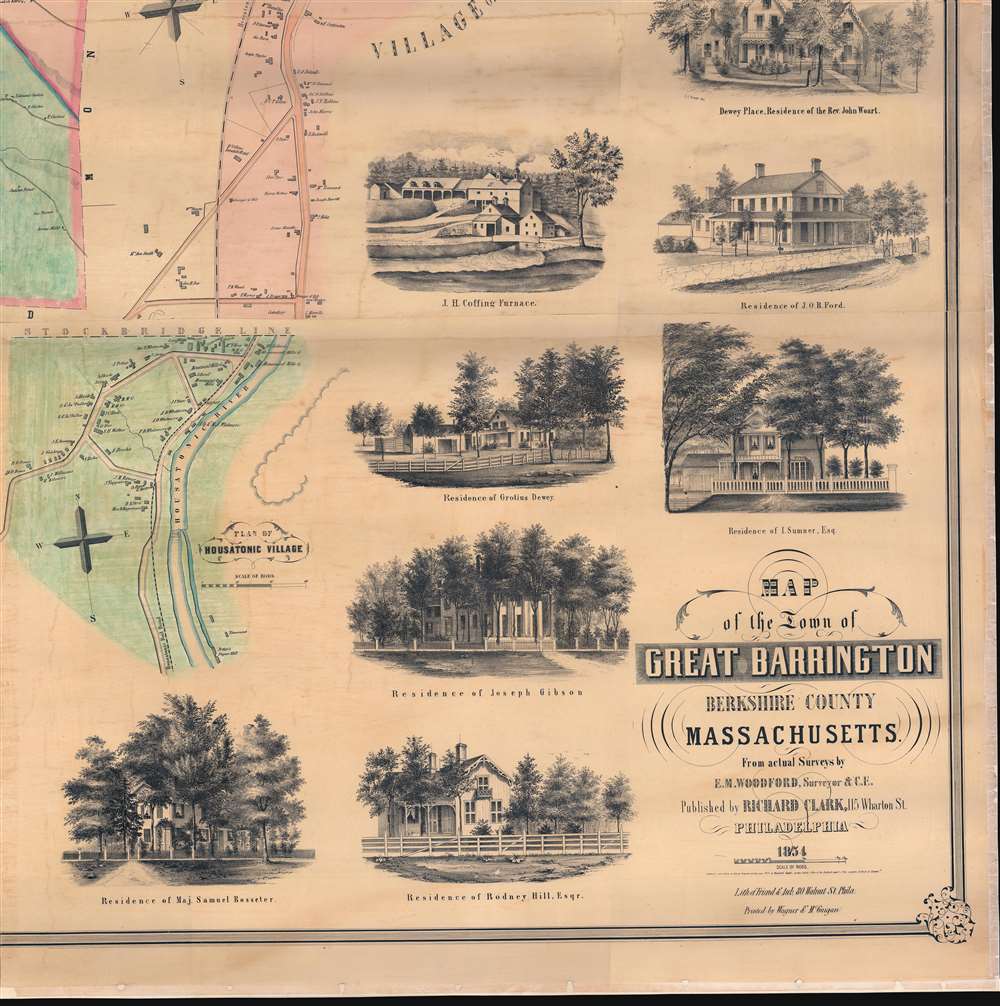 This is an 1854 Edgar Woodford wall map of Great Barrington, Massachusetts, the center of the Berkshires and summer arts cultural life. Great Barrington occupies the center of the sheet with districts shaded for differentiation. Individual homesteads are identified, along with mills, schools, a distillery, a church, and a cemetery. The Housatonic Railroad passes from north to south and passes through Barrington, Van Deusenville, and Housatonic. Two inset maps are situated to the right of the Great Barrington map and focus on the village of Barrington and Housatonic Village. Thirty-one views of buildings throughout the area create a border around the maps. Numerous private residences, several stores, the Rose Cottage Seminary, and the Cascade Barn at Brookside rank among the illustrated locations.

This map was created by Edgar Woodford, published by Richard Clark, lithographed by Friend and Aub., and printed by Wagner and McGuigan in 1854. Our research indicates that there's only one cataloged example, which is part of the collection at the Library of Congress. However, that reference comes from a cataloging of maps in the Library of Congress from 1901 and we have been unable to find the record in their online database.


Richard Clark (fl. c. 1850 - 1865) was an American cartographer active in the middle part of the 19th century. Though he seems to have been based in Philadelphia, most of Clark's work was compiled in conjunction with other publishers and focused on Connecticut and Massachusetts. Clark is associated with several maps, but his most important are a wall map of Fairfield County, Connecticut, and Connecticut itself. Little is known of Clark's life. Learn More...