1872 Haskell and Allen View of the Great Fire of Boston 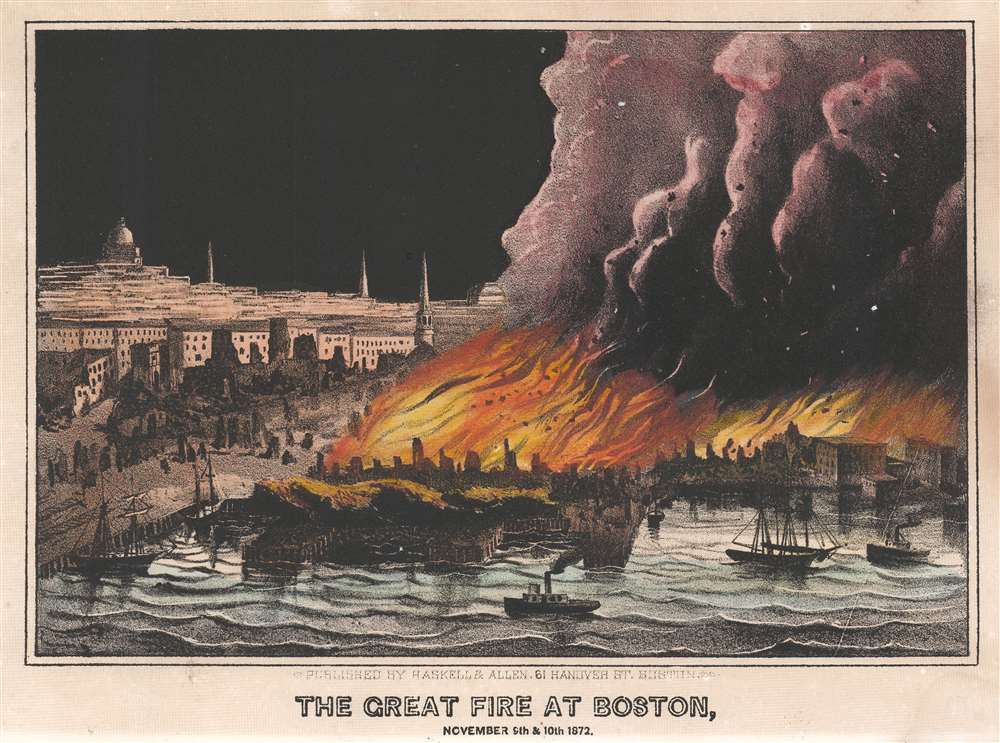 1872 Haskell and Allen View of the Great Fire of Boston

This is a c. 1872 Haskell and Allen view of the Great Boston Fire of 1872. Flames engulf the city's commercial district and smoke billows skyward off the page. Debris can be seen flying through the inferno. The Charles River appears in the foreground, with a handful of ships bobbing on the water. Boston's church spires can be seen along its skyline and the dome of the Massachusetts State House appears near the left border.

The Great Boston Fire began in the basement of a building on the corner of Kingston and Summer Streets in Boston's commercial district on the evening of November 9, 1872. People first noticed the fire around 7:00 p.m., but an alarm was not sounded until 7:24 p.m. By 8:00 p.m., every fire engine in Boston was on the scene. The fire spread easily due to dry wooden building materials and Boston's narrow streets. That made it possible for the fire to jump from building to building and street to street. It took twelve hours to control the inferno, and fire crews came from as far as New Haven, Connecticut, to help. In the end, the fire was contained thanks to the valiant effort to save the Old South Meetinghouse at the corner of Washington and Milk Streets.

Difficulties in Fighting the Blaze

There were several factors that led to Boston's difficulties in containing the Great Fire. Boston boasted the world's first system of telegraph-based fire alarm boxes, which were installed in 1852. However, the boxes were locked in an effort to prevent false alarms and keys were only given to a small number of citizens in any given neighborhood. This meant that the first witnesses to the Great Fire had to find one of the key-holders to be able to sound the alarm. Another problem was that the Boston Fire Department was dealing with an epidemic of an equine flu, which had weakened nearly all the horses it used for pulling its engines. In response, Chief Engineer John Damrell preemptively hired 500 people to manually pull the engines. An investigation after the fire stated that it was believed that this epidemic only delayed deployment by five or ten minutes. A third, and possibly most critical, problem was that Boston's water mains were old and leaked, causing serious water pressure issues. This meant that Boston's firefighters could not get enough water pressure out of many hydrants to reach the upper floors or roofs of buildings. Chief Damrell had been asking the city for years to improve the water mains but was never successful. Boston began improving the water main system after the Great Fire.

This view was created and published by Haskell and Allen c. 1872. An empty OCLC reference exists for this piece, suggesting that a former cooperative member created the entry before withdrawing from OCLC.

Haskell and Allen (1869 - 1880) was a lithography firm based in Boston, Massachusetts, and operated by F.M. Haskell and George F. Allen. Haskell and Allen started their partnership as picture framers and print sellers, then moved into selling lithographs in the early 1870s. They produced a series of horse prints, which are considered by enthusiasts to be the second best series in the genre, although they are still 'several lengths' behind the series by Currier and Ives. Allen left the partnership in 1878, and Haskell operated it by himself until 1880. Some sources say that Haskell went bankrupt. Learn More...