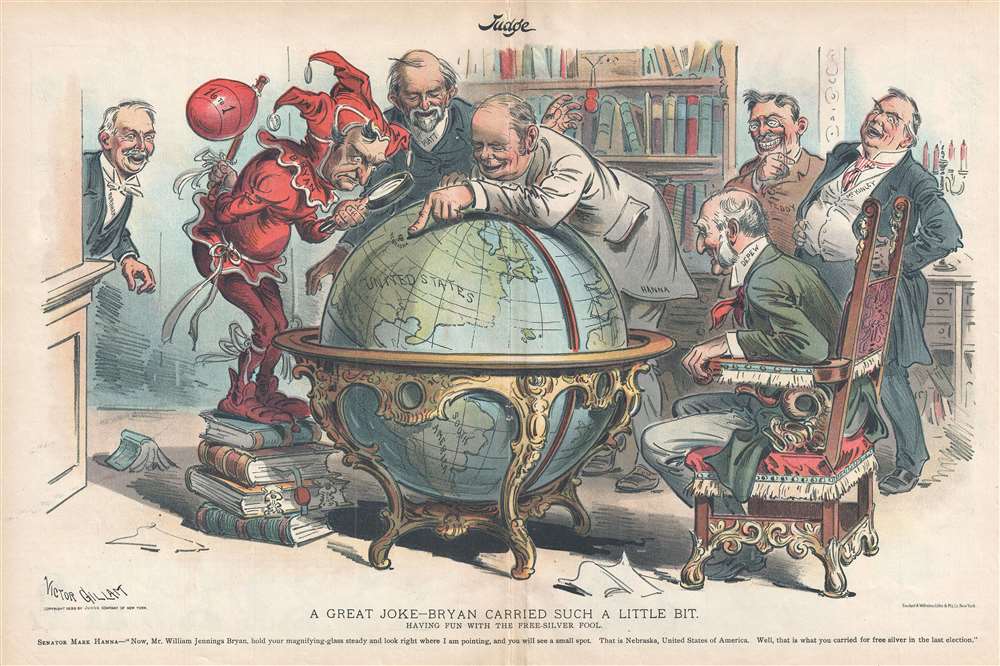 Ridicules the supporters of free silver for winning only one election in 1898 - for governor of Nebraska.
$400.00

This is an 1899 Victor Gillam political cartoon ridiculing the paltry election returns for supporters of William Jennings Bryan and the free silver movement in the elections of 1899, published in Judge magazine. Here, William Jennings Bryan is dressed in a traditional harlequin outfit (a favorite way of depicting him in Judge) and is being lectured by the Republican boss and Senator Mark Hanna about the losses suffered by candidates who supported free silver in the 1899 elections. Other major figures in the Republican party, including President William McKinley, Vice President Theodore Roosevelt, and Senator Thomas Platt of New York, are illustrated enjoying mocking the fool and his belief in free silver.

Free Silver in the United States

William Jennings Bryan of Nebraska was a major supporter of free silver and was the Democratic nominee for president in 1896 and 1900, when he ran on a Free Silver platform. He was soundly defeated in both elections, as were other candidates who supported free silver. After the 1896 election, the United States officially moved to the gold standard, making the support of free silver outdated at best. By Bryan's presidential campaign of 1900, free silver as a political issue had become even more of a nonstarter than it had been. Democratic unpopularity, which partially spawned from this issue, led to Republican successes in presidential elections until Woodrow Wilson won the election of 1912.

This cartoon was drawn by Victor Gillam and published in the December 2, 1899 issue of Judge.

Very good. Even overall toning. Wear along original centerfold. Small closed tears along centerfold professionally repaired on verso. Text and cartoons on verso.
Looking for a high-resolution scan of this?