1755 Bellin Map of the Great Lakes 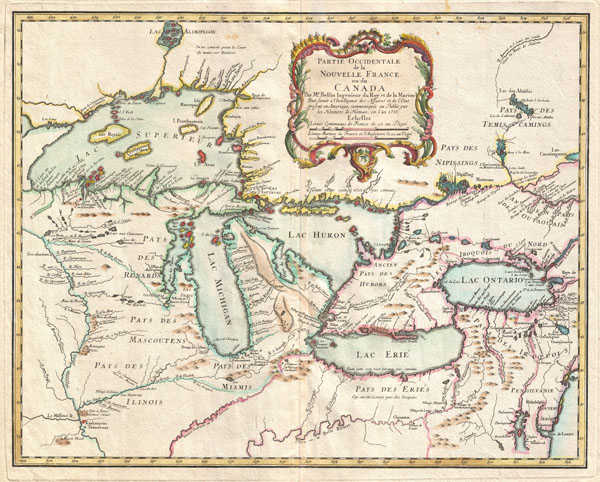 1755 Bellin Map of the Great Lakes

One of the most influential maps of the Great Lakes to appear in the 18th century.

A rare and extremely influential 1755 map of the Great Lakes drawn by Jacques Nicholas Bellin. This map, which appeared in the 1755 issue of the Homann Heirs Atlas Major, covers all five of the Great Lakes as well as the adjacent Indian lands and the English colonies of Pennsylvania, New Jersey and New York. Cartographically this map offers a number of important innovations and is largely derived from Bellin's very similar map of 1745. The plate was acquired and reissued by Homann Heirs in 1755 in response to European interest in the French and Indian War which started one year prior in 1754.

From Verendrye , Bellin is able to extract a significantly advanced view, over De L'Isle, of the form of the Great Lakes and their client river systems. He also relies on Verendrye's journals with regard to the placement of numerous Indian nations and villages. Charlevoix is generally regarded as Bellin's source for his curious choice to include several fictional islands in Lake Superior, including I. Philippeaux, I. Pontchartrain, and I. St. Anne. This map is the first, though hardly the last, to depict these ghost islands which baffled explorers until the early 19th century.

In the lower right hand quadrants of this map Bellin employs a common cartographic trick to flatter his royal patrons in Paris. By diminishing the proportional size of the English colonial holdings in Pennsylvania, New Jersey, Virginia and New York, Bellin, at least metaphorically, advances the supremacy of the French dominions in North America.