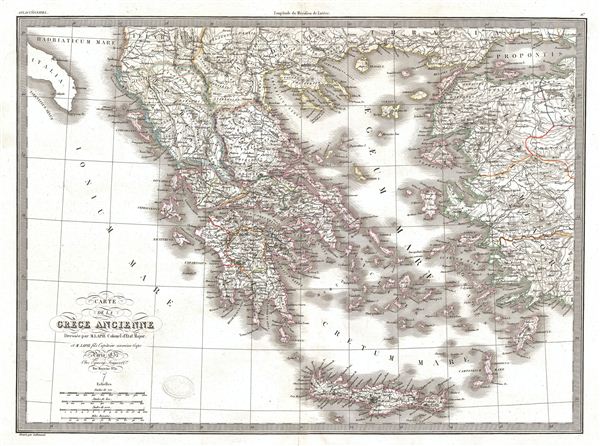 A fine first edition example of M. Lapie's 1832 map of Ancient Greece. The map focuses on the Greece under the Roman empire, covering from the Ionian Sea to the Aegean Sean and Asia Minor and from Macedonia to the Sea of Crete and the Aegean Islands. Following the Battle of Corinth in 146 BC, the Greek peninsula came under Roman rule. The period from 31 BC and AD 180 in Greek history is described as the era of the Pax Romana. This was a period of peace and security when many Greek cities flourished, leading to cultural and economic progress. After the fall of the Western Roman empire, Greece became the center of the eastern Roman or Byzantium empire. However, following the conquest of the capital city of Constantinople, the Byzantium empire fell to the Turks in BC 1453. Greece would be under Ottoman rule for nearly 1,000 years until the Greek War of Independence in 1821.

This map was engraved by Armand Joseph Lallemand as plate no. 09 in the first edition of M. Lapie's important Atlas Universel. This map, like all maps from the Atlas Universel features an embossed stamp from the Lapie firm.