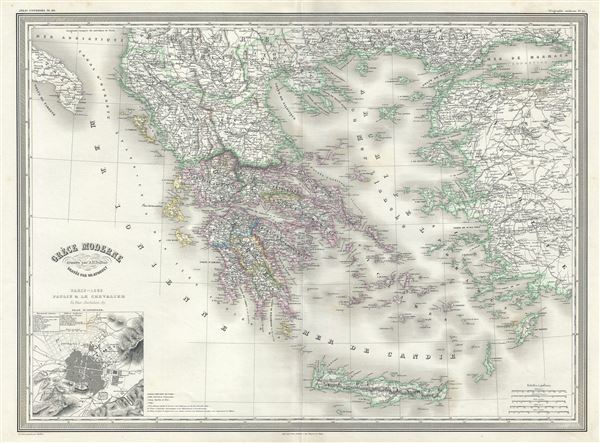 This is an attractive large format 1860 elephant folio map of Greece and its colonies by A. H. Dufour. It extends from the Gulf of Taranto to the Sea of Marmara and south as far as Crete or Candia. Throughout, the map identifies various cities, towns, rivers and assortment of additional topographical details. An inset in the lower left quadrant features a plan of Athens with ancient and modern monuments noted.

This map depicts the waning years of Ottoman hegemony in the region, with the Greek nationalist movement attaining independence for the Peloponnese in 1821. The Ionian Republic, under the protection of Great Britain, was also free of Ottoman control. The other Grecian and Balkan states, including Serbia, Croatia, Moldavia, Wallachia, Albania, and Macedonia, remained at least nominally under Ottoman control until 1878.