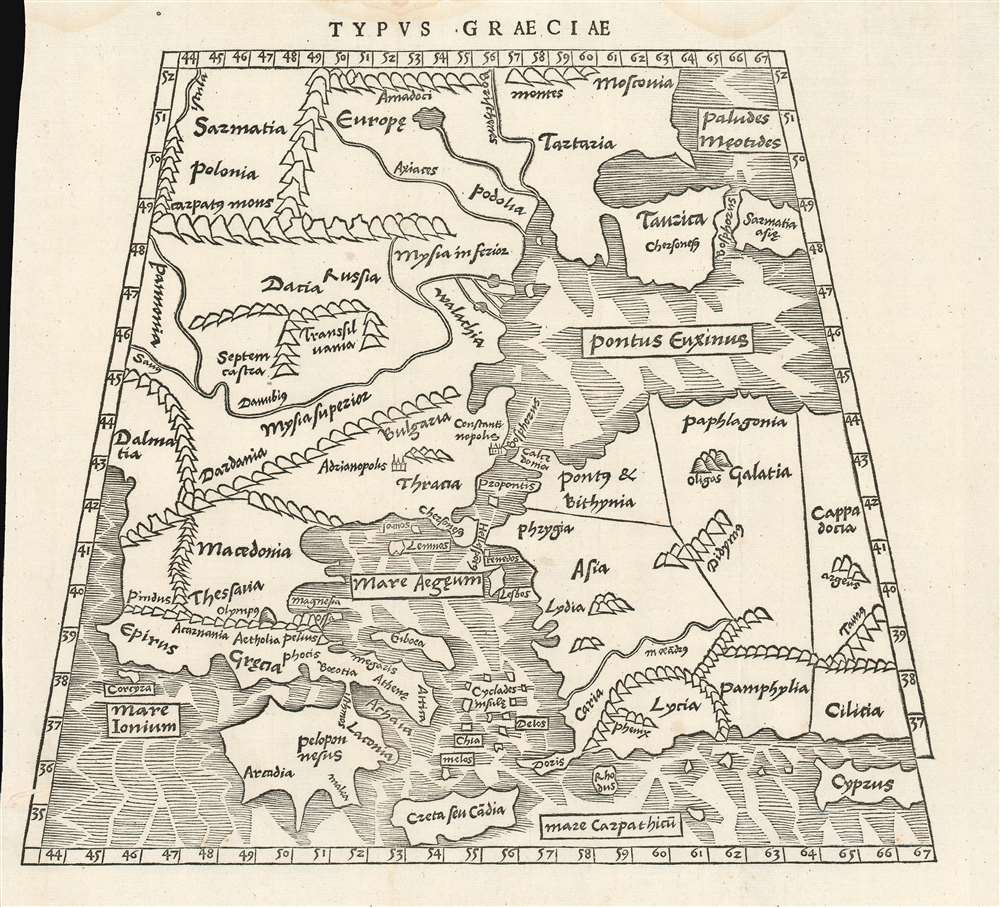 This is a rare 1538 map of Greece and the region surrounding Constantinople, executed by Sebastian Münster for inclusion in his edition of Solinus' Polyhistor. It predates by two years the map of Greece in Münster's 1540 edition of Ptolemy'sGeographia, but it shares with other early maps of Greece the Ptolemaic conic projection. It is a sixteenth century woodcut showing third century geographical knowledge of the region - although at its northern extents, contemporary place names intrude. The map extends from Dalmatia in the west to Cappadocia, Cilicia and Cyprus in the east; it extends from Crete and Cyprus in the south to Poland, Muscovy and Sarmatia in Europe in the north. The Black Sea and the Meotian Swamp (the Sea of Azov) also appear. The map is boldly and legibly presented, with hachured oceans, and with mountains shown pictorially. The cities of Adrianopolis and Constantinople are marked pictorially as well, suggesting their greatness.

While the physical geography of the map is basically Ptolemaic, the names of nations, and people, however, are consistent with those appearing in Solinus' text - a sensible choice, indicating that with this map Münster was applying his best available topography specifically in order to illustrate and clarify the work in which the map was to appear.

This map was first issued in the 1538 edition of Solinus' Polyhistor, which was published by Petri but for which Münster also supplied the text and presumably the transcription of the 3rd century work. A 1543 edition was also printed including this map. The two editions are easily distinguished: the map title of the the 1543 second edition has a full stop not present on this first edition of 1538. About thirty examples of this edition of Polyhistor are catalogued in OCLC, with some 23 of the 1543 edition. We see examples of the separate map in only three institutional collections: The Bayerische Staatsbibliothek, Universitatsbibliothek Eichstatt, and the National Library of Australia.