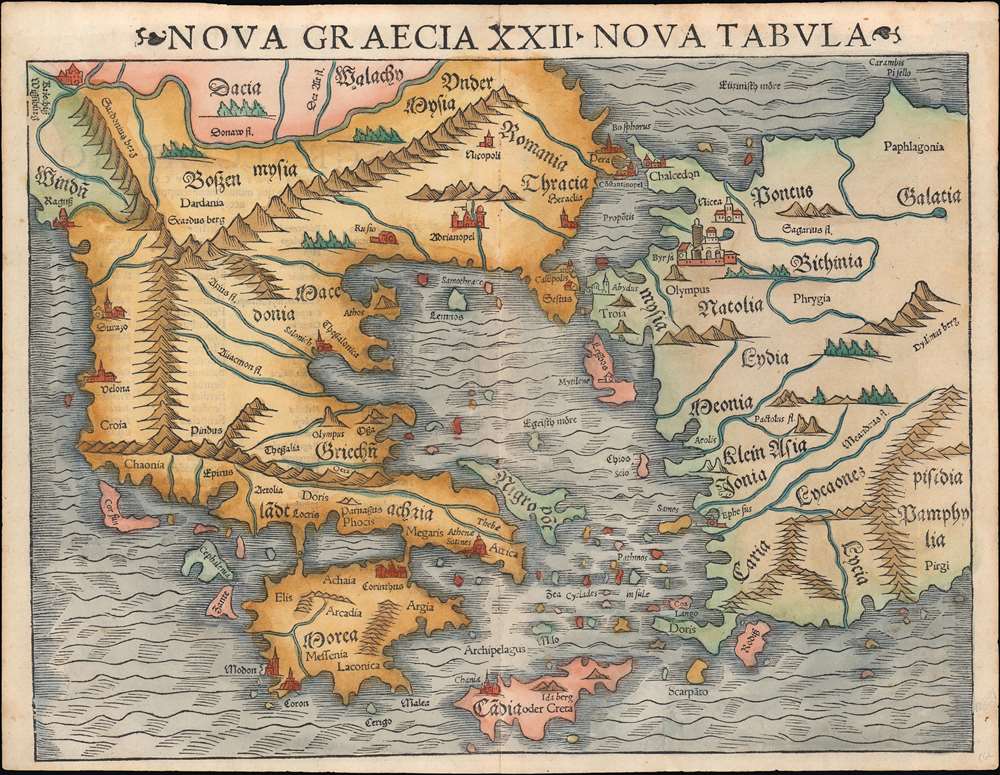 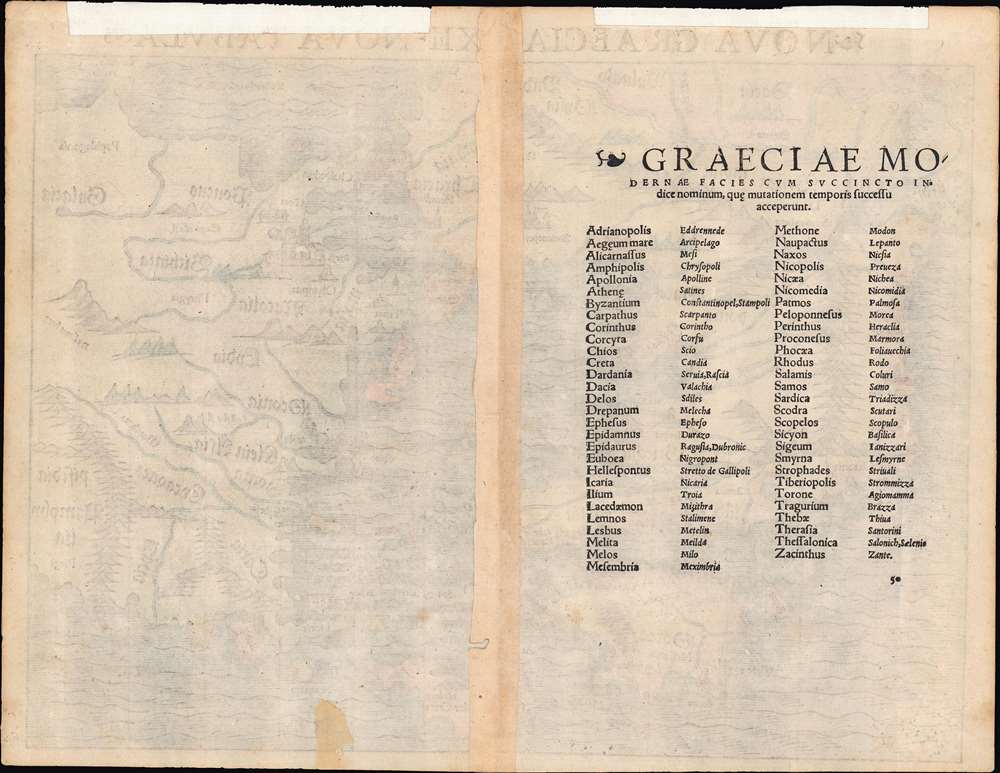 Earliest map of Greece based on contemporaneous knowledge, in a very early issue.

This is a scarce 1545 example of Sebastian Münster's modern map of Greece: the second imprint of the first detailed map specifically of Greece and the Greek Islands based on contemporary geographical information. Münster's Geographia and Cosmographia provided for many years the literate European's only glimpses of the world, and these two works contained several maps with previously unseen contemporaneous knowledge of the areas they depicted. For Münster's readership, this map was the first depiction of Greece not based upon the 2nd century work of Claudius Ptolemy. This map appeared in Geographia as a somewhat late addition: the 1540 and 1542 editions of the work did not include this map. It would appear again in the 1552 Ptolemy (with the added coordinate bars characteristic of that edition.) It first appeared in the 1544 debut edition of Münster's Cosmographia and would appear in all editions of that work until 1578. In that 1544 German edition, the title of the map explicitly states Münster's intent: 'Neüw Griechen land mit andern anstoffenden in lendern/ wie es zu unsern zeiten beschreiben ist' - 'New Greece... as it is described in our era.'

The distinction of this as a modern, not a Ptolemaic map refers not only to the detail within the map but in its overall scope. The maps based on Ptolemy's tenth table of Europe - such as those that appear in the 1477, 1482 and 1513 Ptolemies (as well as Münster's own Tabula Europa X) all share the same focus. They present the Greek peninsula and islands in detail, including Crete, but show almost none of Asia Minor, and detail only as far north as the 'Scardius Mountains' separating Macedonia from Illyricum, or Dalmatia. Although they show the southern part of the Hellespont, Constantinople and the opening of the Black Sea was not included.

The first modern regional map to include Greece was the 1513 Waldseemüller Tabula Moderna Bossine, Servia, Gretiae et Sclavoniae which showed Greece along with the Balkans as far north as the Danube, as far south as Crete, and encompassing southern Italy and Sicily in the west, and part of Asia Minor in the east. In contrast, Münster's modern map of Greece specifically focuses on the Greek Peninsula and Islands while including Constantinople and the Bosphorus.

Consequently, this is the first map to focus on Greece, while adding to Ptolemy's toponymy place names useful to the 16th century reader. For example, the ancient Greek Euboea is here replaced with Negropont; Boeotia with Phocis, Corcyra with Corfu.

Typical of virtually all maps printed north of the Alps in the first half of the 16th century, this map is a woodcut, lending the work a distinctive aesthetic. Mountain ranges and forests are indicated pictorially, and major cities are likewise presented as small clusters of buildings in profile. Interestingly, the most prominent of these is neither Constantinople, nor any city in Greece proper; the largest shown are Nicea and Bursa, both in Asia Minor. Bursa, in particular, is shown as a great city. Perhaps the scale of the map prevented Münster from showing Constantinople so grandly, but Bursa (spelled Byrsa here) had been the first major capital city of the Ottoman Empire and it remained to be the most important administrative and commercial center in the empire until the 1453 conquest of Constantinople. During Münster's lifetime, Bursa continued to be a wealthy nexus of the Ottoman silk trade, and a major cultural hub.

Cut by an anonymous formschneider, this map was prepared sometime after 1542 for inclusion in the first edition of Münster's 1544 Cosmographia, and appeared in all editions of that work until 1578. It was included in the 1545 and 1552 editions of Geographia: the present example conforms typographically to the 1545 Geographia edition. This edition of Geographia Universalis is catalogued in thirty-six institutional collections. We see three examples of this edition of the separate map in OCLC, although it appears on the market from time to time.

Münster, Sebastian, Geographia Universalis, (Basel: Petri) 1545.     Following in the footsteps of Martin Waldseemuller and Lorent Fries before him, Sebastian Munster edited and published a modernized version of Claudius Ptolemy's Geographia. This appeared in six Latin editions in 1540, 1541, 1542, 1545, 1551 and 1552. According to Karrow, Munster based the text on the Latin translation of Willibald Pirkheimer, but he carefully collated it with previous editions, adding notes of his own. The first three editions contained 48 maps, consisting of 27 based on Ptolemy's ancient geography, and 21 maps based on modern geographical knowledge. The latter three editions contained 54 maps, comprised of the same ancient works but with six of the modern maps discarded, and twelve new ones added. For the collector, the modern maps are of sharpest interest. Some were based on Waldseemuller's geography, but many were based on Munster's own surveys and those of other European geographers whose assistance Munster had been able to enlist. Most of these would be reprised in Munster's magnum opus, Cosmographia Universalis. A disproportionate number of Munster's modern maps show contemporary geographical knowledge of the their respective areas for the very first time: The first map to show the continents of the Western Hemisphere; the first map to focus on the continent of Asia; the first modern map to name the Pacific Ocean. Even in cases where earlier maps exist, Munster's works very often remain the earliest such acquirable by the collector.