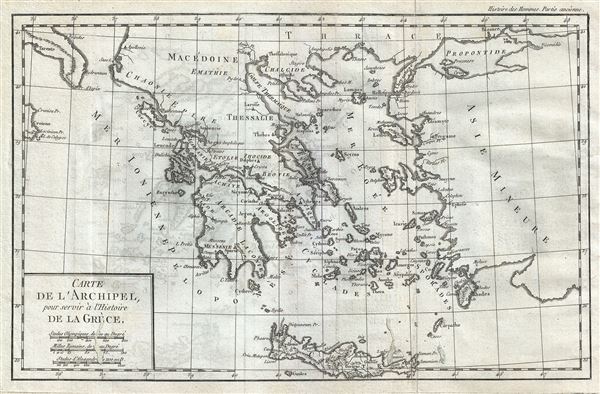 This is a scarce 1782 Jean- Baptiste-Claude Delisle de Sales Map of Greece and the Greek Archipelago. The map covers southern Greece, the Greek Isles and Crete from the Macedonia and the boot of Italy to Asia Minor and south as far as Crete. It includes the Peloponnese, Rhodes, the Cyclades, the Sporades, the Ionian Islands, the Aegean Islands and several other Greek Islands. Throughout, the map notes several important Greek cities, including Thebes, Delphi, Corinth, Sparta, along with rivers, beautifully rendered mountains and other topography. This map was issued as part of Delisle de Sales' Histoire des Hommes. Partie de l'Histoire Moderne. This volume is exceedingly rare as most of Sales' work was burnt under the censorship of heresy.