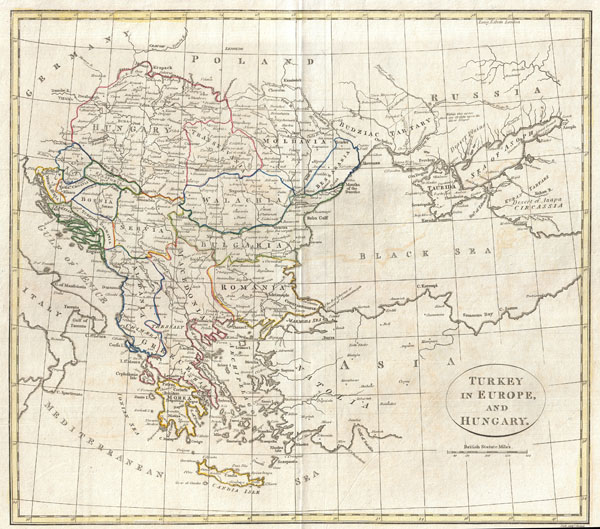 A fine 1799 map of Greece, the Balkans, and Turkey in Europe by the English map publisher Clement Cruttwell. Covers from Hungary and Moldavia in the north, down to Crete (Candia) in the south; and from Croatia in the west to Bessarabia in the east, inclusive of Greece, Macedonia, Albania, Romania, Bulgaria, Serbia, Walachia, Moldova, Transylvania, Hungary, Croatia and Bosnia. Also shows parts of adjacent Germany, Poland, Russia, Turkey, and Italy. Includes rivers, political boundaries, important cities, ports and gulfs. Mountains and other topographical features shown by profile. Outline color and fine copper plate engraving in the minimalist English style prevalent in the late 18th and early 19th centuries. Drawn by Clement Cruttwell and published in the 1799 Atlas to Cruttwell's Gazetteer.