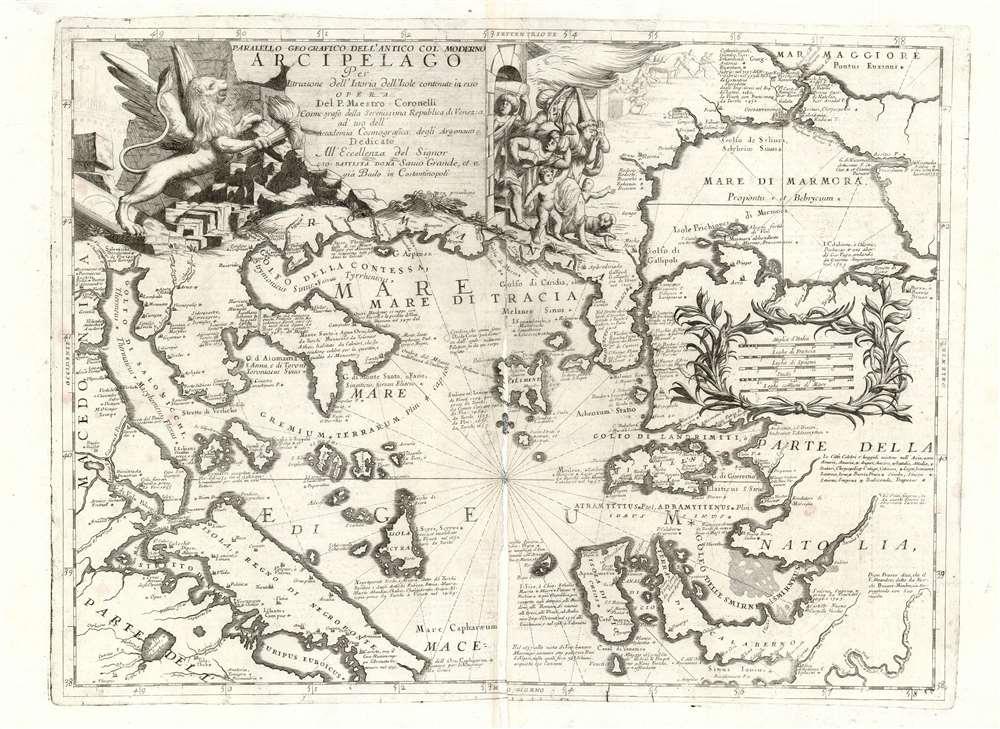 A Richly Decorative Engraving of a Theater of the Sixth Ottoman-Venetian War.

This is a rare 1697 Vincenzo Coronelli map of the northern Greek Archipelago, showing Thessalia and north-western Turkey. The map focuses on the northern Aegean Sea and the Sea of Thrace, the Sea of Marmora, and their connection to the Black Sea via the Bosporus Strait. The Negroponte and Constantinople are prominent. Rich detail through offers historical notes illuminating both the recent history of the region, as well as the remote classical era, in order to lay the background for the momentous events celebrated in the map’s cartouche.

Many of Coronelli’s maps boast ornate allegorical cartouches, and this one is no exception. The winged Lion of Venice appears at left, roaring and smashing down a wall, brandishing a lit torch in his right paw to set the structure afire. Meanwhile, to the right, a dismayed crowd of dogs, putti, and be-turbaned and pointy-hatted Turks spill out of the burning building, fleeing with whatever they can carry. The context for the warlike cartouche is the Sixth Ottoman-Venetian War (1684 - 1699), also known as the Morean War. The beginning of the war was characterized by a successful Venetian offensive that brought the capture of fortresses in western Greece, the Peloponnese, and a brief (and destructive) occupation of Athens. Although an Ottoman counteroffensive began in 1688 that would reverse many of the Venetian successes, on balance this stands out of the only one of the Ottoman-Venetian wars that can be counted a Venetian triumph. Certainly, at the time this map was executed, it must have seemed so: by 1718 the tables would be turned yet again.

This map appeared in editions of Coronelli’s Corso Geografico Universale in 1690 but was also included in the second volume of his Atlante Veneto. in 1696. The presence of verso text indicates that this example is from this latter work. The map is only catalogued separately by the Bibliotheque Nationale, the Bayerische Staatsbibliothek, and the Biblioteca Nacional de Espana. The Atlante Veneto is well represented in institutional collections.

Coronelli, V. Atlante Veneto Venice, 1697.     The Atlante Veneto was a Venetian cosmographic atlas issued by the Jesuit Minorite friar, geographer, and globe maker Vincenzo Maria Coronelli. The Atlante Veneto was a massive work consisting of some 13 volumes in four parts. The first section focused on a general introduction to geography and included notes a various geographic systems and globes. The second part consisted of world maps from various periods and in various styles, including double page maps of the continents and poles derived from his earlier globe work. The third part focused on hydrography and included nautically styled maps of important rivers, bays, oceans, lakes, and gulfs. The fourth and final section detailed exploration and describing noting various explorers and their discoveries. The whole consisted of some 191 engraved charts and maps as well as an assortment of views and decorative plates. The atlas was conceived as a continuation of Blaeu's Atlas Major and in many respects follows Blaeu cartographically. Many of the other maps are derived from Coronelli's own earlier globe work and exhibit various distinctly globe-like elements. Coronelli first issued the Atlante Veneto in 1691. A second edition was prepared and issued between 1695 and 1697. Most of the individual map plates remain identical between editions. The maps of the Atlante Veneto are universally admired for their exquisite engraving and high production quality, including fine paper and premium inks. All examples were issued uncolored and have typically been left as such by dealers and collectors.

Poor condition. Significant damage to centerfold, reinstated in manuscript. Else a bold strike.