1770 Bellin Map of Greenland and Iceland 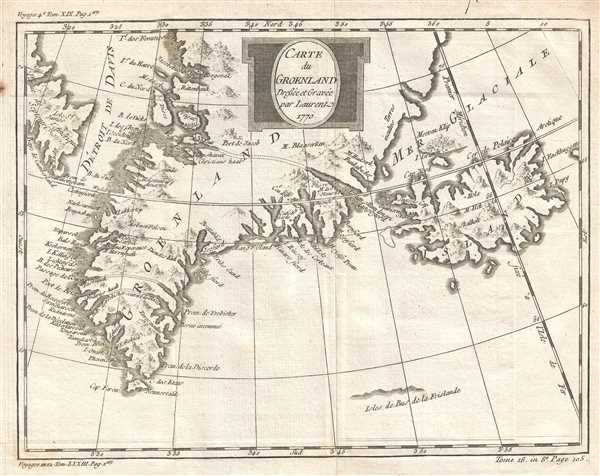 1770 Bellin Map of Greenland and Iceland

Illustrates the mythical Frobisher Strait and the island of Frisland.
$275.00

This is a curious 1770 Jacques Nicolas Bellin map of Greenland and Iceland. The map depicts the region from the coast of North America to Iceland and from northern Greenland to the North Atlantic Ocean. Originally printed in volume eighteen of Jean-François de la Harpe's masterwork Abrégé de l'Histoire Générale des Voyages (for which Bellin created all the maps), this work appears to compile several different mythical locations believed to exist in this region, including Frobisher's Strait and Frisland.

Frobisher's Strait began appearing on maps in southern Greenland following Sir Martin Frobisher's 1574 expedition to locate the Northwest Passage. When Frobisher returned from his voyage, he declared that he had, in fact, discovered a strait with America on one side and Asia on the other, which he of course named after himself. It quickly became evident to his contemporaries that he had been mistaken about his true location, but had, in fact, been traveling through a strait across southern Greenland. This strait, still known as Frobisher's Strait, quickly began to appear on maps of the era. Cartographers and other explorers, however, could not completely agree on the correct location for Frobisher's Strait, which is we believe to be the reason for not one, but three different straits across southern Greenland in this work by Bellin.

It would not be until the voyages of John Davis in 1585-87 that it would become clear that Frobisher had not been exploring between America and Asia, but between Greenland and North America. The Davis Strait (illustrated here between Greenland and Labrador) is named after him. Even with this revelation, it was believed that Frobisher had indeed discovered a strait, but that it was, in fact, located on the southern tip of Greenland. Thus, most sixteenth and seventeenth century works depicting Frobisher's Strait locate it in southern Greenland stretching from the east coast to the Davis Strait.

Frisland, also known as Friesland, Frischlant, Frislana, Frislandia, or Fixland, is a mythical island located to the south or Southwest of Iceland in the North Atlantic. Although its exact origin is unknown, it is believed that Frisland was originally an approximation of the location of Iceland. However, in 1558, Frisland appeared on the influential Zeno map as a separate landmass. This incorrect mapping led to Frisland inclusion on maps of the North Atlantic for the next hundred years, and only the charting and mapping of the North Atlantic by explorers, notably of English and French origin, dispensed with the myth of Frisland.