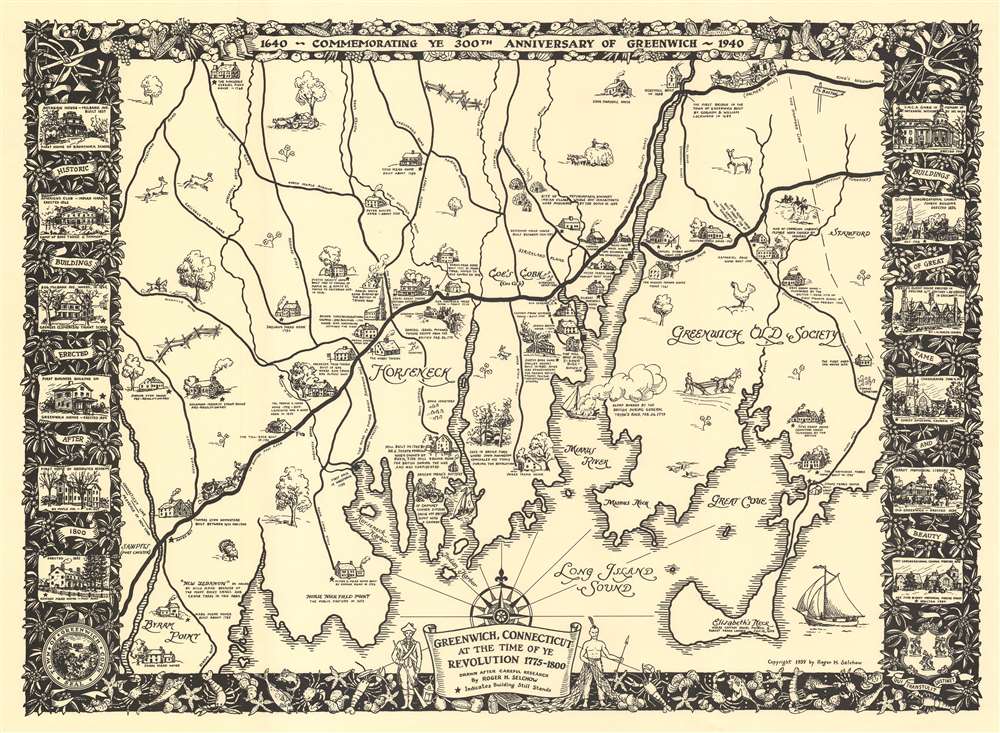 A pictorial map of Greenwich, Connecticut celebrating the 300th anniversary of its founding.

This is a very rare 1939 Roger Selchow pictorial map of Greenwich, Connecticut created to celebrate the 300th anniversary of Greenwich's founding. Depicting Greenwich from Byram Point to Stamford and from The Fincherie Ezekiel Finch House to Elisabeth's Neck and Long Island Sound, Selchow captures the area may have been during the era of the American Revolution. Homesteads, taverns, and mills are identified, labeled, and even dated. Stars identify historic buildings that survived to 1939, when the map was published. The Indian village where a 1644 massacre perpetrated by Dutch colonists, part of Kieft's War, is noted. Soo too is the site on Elizabeth's Neck where Captain Daniel Patrick and Robert Feaks landed on July 18, 1640.

By far, though, most of the notes highlight events that took place in the region during the American Revolutionary War. Selchow identifies which houses were plundered and burned by the British, and the sloop burned during General Tryon's raid of February 26, 1779. Tryon adds that General Tryon was almost shot in the Evenezer Mead Tavern. A vignette of people firing a cannon remarks that 'at Chimney Corner, citizens drove off British sloop with a cannon'.

Apart from the facts concerning the Revolution, illustrations of fences, flowers, trees, horseback riders, farmers, and wildlife provide an incredible level of charm. Roads snake their way across the map, each of which are labeled. The whole is surrounded by a pictorial border decorated with crops along the top and sea creatures along the bottom and the title is flanked by a Revolutionary War soldier armed with a musket and an Indian holding a fishing net and a spear. Six views of 'historic buildings erected after 1800' are illustrated along the left border and another six views of 'buildings of great fame and beauty' are illustrated along the right.

This map was created by Roger H. Selchow and published in 1939. The OLCL notes two examples in institutional collections at the Connecticut Historical Society and the New York Public Library. We are aware of only one other example that has entered the private market.