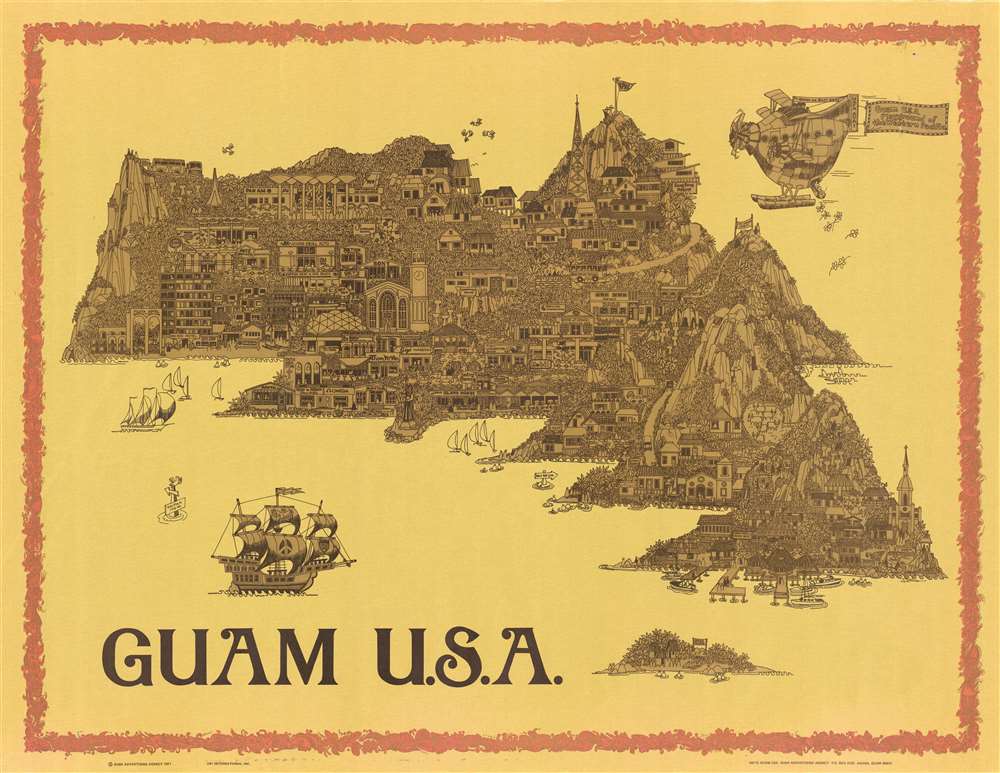 This is a visually entertaining, psychedelic pictorial map of Guam, published by the Bush Advertising Agency of Agana, Guam in 1971. It was produced on behalf of, or in partnership with United Key International, a company formed to promote tourism to the island. Consequently, the map highlights features of interest to both the tourists and American military visitors. It is screen-printed in red, black, and metallic gold, on cornflower-gold paper. The map is a caricature of the heavily jungled, mountainous island: scattered amongst the island's fauna are many colonnades, the indigenous Chamorro 'Latte Stones' (the old foundations of Chamorro houses). The old terminal of Guam International Airport and the Peace Memorial are prominently featured, as is Agana's Dulce Nombre de Maria Cathedral. The cities of Agana, Agt, Umatea, Merizo, and Inarajan are highlighted along with their many hotels, restaurants, resorts, and shops. Natural sites such as 'Two Lovers Point,' Mount Lam Lam (Guam's highest peak), and Talafofo Falls are shown. The tower of KUAM, Guam's radio station, nearly tops the highest point of the image (KUAM was in operation from 1954 until shuttered in 2020.) There is a particular focus on Cocos island: important for UKI, who operated glass-bottom-boat tours from Merizo to the smaller island.

Echoes of the Summer Of Love

The map is composed for entertainment. In addition to the grandiose terrain and exaggerated, cartoony architecture, the map is filled with decorative flourishes. Birds fly aloft, a sailing ship sporting a peace sign on its mainsail approaches in the foreground, while the waters around the island are plied by smaller sailboats and surfers. Atop the central peak of the island, a banner reading 'LOVE' flaps above all. Meanwhile, approaching from the right is a steampunkish airplane towing a banner reading 'GUAM U.S.A. Playground Of The Western Pacific' and scattering flowers. The peace sign imagery, the 'Love' banner, the overall aesthetic of the piece, it's coloring, and above all the airplane, are universally adapted - one might say 'flagrantly copied' - from the famous psychedelic view of San Francisco, drawn by Jim Michaelson published by David Schiller's Sparta Graphics in 1967. The dream of the San Francisco hippie era was longer-lived than Sparta Graphics (fl. 1966 - 1968). The hippie-aficionado-artist did sign the work - 'L. Bush' - but the ubiquity of the Bush surname and short lifespan of Bush Advertising confounds. UKI International, formed by American Servicemen, would have still been young enough to relate to the pop references replete in this image. The airplane, for instance, first made its appearance on show posters Michaelson drew for The Jefferson Airplane (1971 was a bad year for the band: their chronic lineup changes were reaching fever pitch, and singer Grace Slick was recovering from a car crash. This writer has found no evidence the band EVER played Guam.)

Amongst the shops and hotels of Agana are a trio of businesses clustered together: Bush Advertising, UKI International, and R. S. Emerson. They appear to have been bound together by financial ties: certainly, UKI was founded by Peter Dale Kauss, who purchased the stock brokerage of R. S. Emerson in January 1971, but by July of that year Kauss was under indictment for fraud - and no longer on the island. It is unclear whether Bush was partly owned by UKI or whether UKI was simply too big a client to survive the loss of, but none of the three companies appears to have lasted beyond 1972. Certainly, this goes a long way to explaining the rarity of this print: neither the company producing it nor the company commissioning it survived more than two years.

This is extremely rare, and it may be a unique survival. We find no examples of this poster in any institutional collection, and are aware of no others to have come on the market.

Bush Advertising Agency was a publishing company formed in 1970 in Agana, Guam. The company's focus was on advertising and commercial art. Their style gravitated towards a fashionable, psychedelic aesthetic (as evidenced in their Summer-of-Love influenced poster of Guam produced for UKI Interntional in 1971.) At their inception the company boasted itself 'Guam's only complete advertising service' and they seem to have produced all aspects of their product (the art, and the printing) in - house. We see no reference to the company any later than 1972, and are left to conclude that the company was short-lived. Learn More...


UKI International INC (United Key International) was a tourism promotion agency formed in Agana, Guam in 1970 by Peter Dale Kauss. Its inception was welcomed in the local press, where they were described as 'a group of servicemen convinced that Guam has tourist potential.' They seem to have operated tours from the main island to Cocos Island, and were engaged as early as 1970 in soliciting investors. Unfortunately, Kauss absconded to Chicago in 1972 under SEC investigation (he was apprehended and sentenced for mail fraud, and we do not hear further of the company after that time. Learn More...

Excellent condition. Three color screen print on treated paper.
Looking for a high-resolution scan of this?