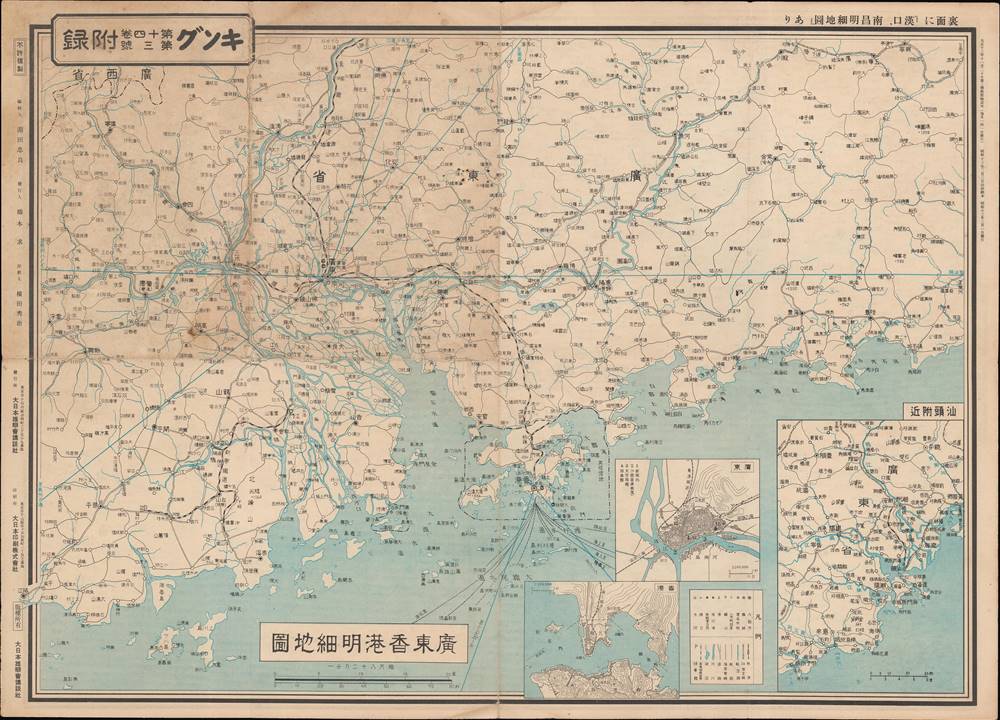 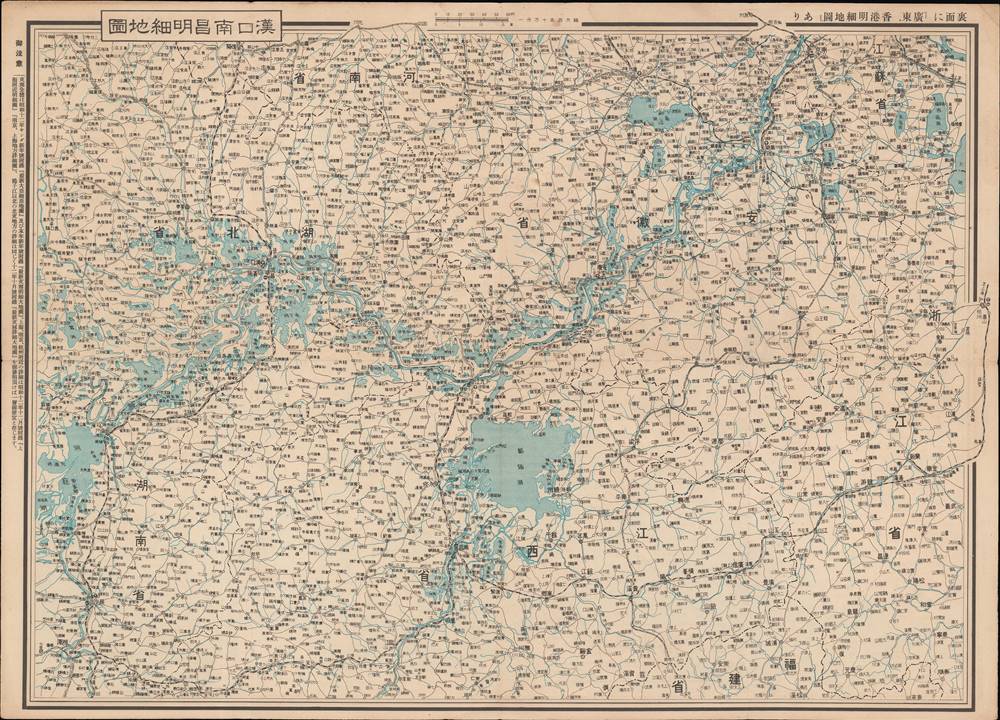 This is a pair of maps (front and back of the same sheet) from 1938 covering Guangdong, Hong Kong, and the Central Yangzi Region, including Hankou and Nanchang (now Wuhan), made during the Second Sino-Japanese War (World War II). It was published in King (キング) magazine, a popular general interest monthly.

Geography for the War Effort

These maps fall into the genre of 'China Incident' maps published in Japanese newspapers and magazines in the late 1930s. The Japanese home front audience would have been eager to locate places where their loved ones were fighting, while the government and military wanted the public to be able to follow the course of the Imperial Army's victories.

The front (recto) is a map of Guangdong Province with Hong Kong (and Macao) marked out in dashed lines, as they were then colonies of Portugal and Great Britain, respectively. The legend includes symbols for cities and towns, infrastructure, sea and air routes, geographic features, religious sites, and Japanese consulates. Inset maps (scale 1:100000) of Shantou (Swatow) and environs, Guangzhou (Canton), and Victoria Harbor in Hong Kong are included for reference.

The verso (back) is titled as a map of Hankou and Wuchang, at left-center and bottom-center respectively, but the map (scale 1:1500000) shows the entire Central Yangtze River Region, including parts of Hunan, Hubei, Jiangxi, Fujian, Zhejiang, Jiangsu, Anhui, and Henan Provinces. This region would be the site of a Japanese offensive later in the year across a long front, grouped under the heading 'Battle of Wuhan,' which resulted in a pyrrhic Japanese victory. An explanatory note in the left margin points out that different parts of the map shown here are based on maps published in King in the preceding months and years.

Although determined to resist the Japanese, Chiang was eager to eliminate the domestic threat from the Communists first while also buying time to modernize his armies and gain better control over his generals, most of whom were semi-independent warlords. These plans were disrupted when Chiang was kidnapped by one of his own generals in December 1936 and forced to enter a united front with the Communists. Now compelled to turn his attention towards a war with Japan, it was not a matter of if but when a war would come.

The July 7, 1937 Marco Polo Bridge Incident has traditionally been considered the start of the war, when Chinese and Japanese troops began exchanging fire at the Marco Polo (Lugou) Bridge, along a main access route to Beijing. This exchange of fire escalated to an all-out battle leading to Japanese forces capturing both Beijing and its port city of Tianjin. As the conflict expanded, Chiang aimed to deliver a knockout blow before Japanese reserves could be thrown into the fight. He also had to convince the Chinese public and the international community that he was intent on fighting a total war with Japan. Chiang launched an assault on Shanghai in the autumn of 1937 with his best troops and equipment, hoping to throw the Japanese garrison there into the sea, but was unable to completely drive them out. When Japanese reinforcements did arrive, they launched a counterattack that forced the Chinese to retreat from Shanghai with heavy losses. After a cursory defense of the capital, Nanjing, Chiang moved the capital to Chongqing, deep in the Chinese interior, to prepare for a protracted war of attrition.

This map was produced when China's war effort was at its nadir, and conversely, Japan was very confident following its victories in eastern China. At this point, Chiang's strategy was to adopt scorched earth tactics and fight battles to delay the Japanese advance, in order to buy time to turn Chongqing into a rallying point. Despite the bluster of nationalistic propaganda, Japan's military and civilian leaders understood that the country's manpower was not nearly sufficient to invade and occupy all of China, especially with over a million troops stationed in Manchuria in the event of a conflict with the Soviets. In late March 1938, the Diet passed the National Mobilization Law, which put Japan on a total war footing, but still the only hope of a real victory in China was to force Chiang to surrender (increasingly unlikely) or find an alternative figure with sufficient political legitimacy (after some reluctance, they settled on Wang Jingwei, an old rival of Chiang in the GMD, to lead a collaborationist government based in Nanjing).

The summer and autumn of 1938 saw intense fighting around Wuhan and Guangzhou which resulted in Japan seizing those cities, but at considerable cost and without denting Chinese resolve to resist. Afterward, the war settled into a grinding stalemate of local campaigns, guerilla war and counter-insurgency, and diplomatic maneuvering vis-à-vis Western powers. Japan's main goal was to cut off supplies to Chiang's troops, which led them to seize all the significant ports in eastern China, including Guangzhou, Xiamen (Amoy), Shantou (Swatow), and more. However, the presence of foreign concessions and colonies (Hong Kong, Macao, Guangzhouwan, Tonkin) threw a wrench into this strategy as these areas became conduits for smuggling supplies to Kunming and Chongqing. The desire to cut off these supplies led Japan to occupy French Indochina in September 1940, a decision which moved them towards open confrontation with Western powers, especially the United States.

This map was printed on February 3, 1938 (Showa 13) and was published on March 1 the same year as an addendum to the March issue of King magazine. It was edited by Fuchida Tadayoshi (淵田忠良), published by Hashimoto Motome (橋本求) of Kodansha, and printed by Yokota Shūji (横田秀治) of the Dai Nippon Printing Company (大日本印刷株式會社). It is held by Harvard University, the Guangzhou Library, and Academia Sinica, and is scarce to the market.


Hashimoto Motome (橋本求; 1918 - 1977) was a publisher and author with the publishing house Kodansha. After graduating from Waseda University, he joined Kodansha and became the editor-in-chief of Women's Club (婦人倶楽部) and later editor-in-chief of King (キング) in the early 1940s. After the war, he held several senior roles at Kodansha, while also writing a biography of the banker Kitaro Okano (岡野喜太郎伝 : 人とその事業) in 1952 and a history of Japanese publishing (日本出版販賣史) in 1964. Learn More...