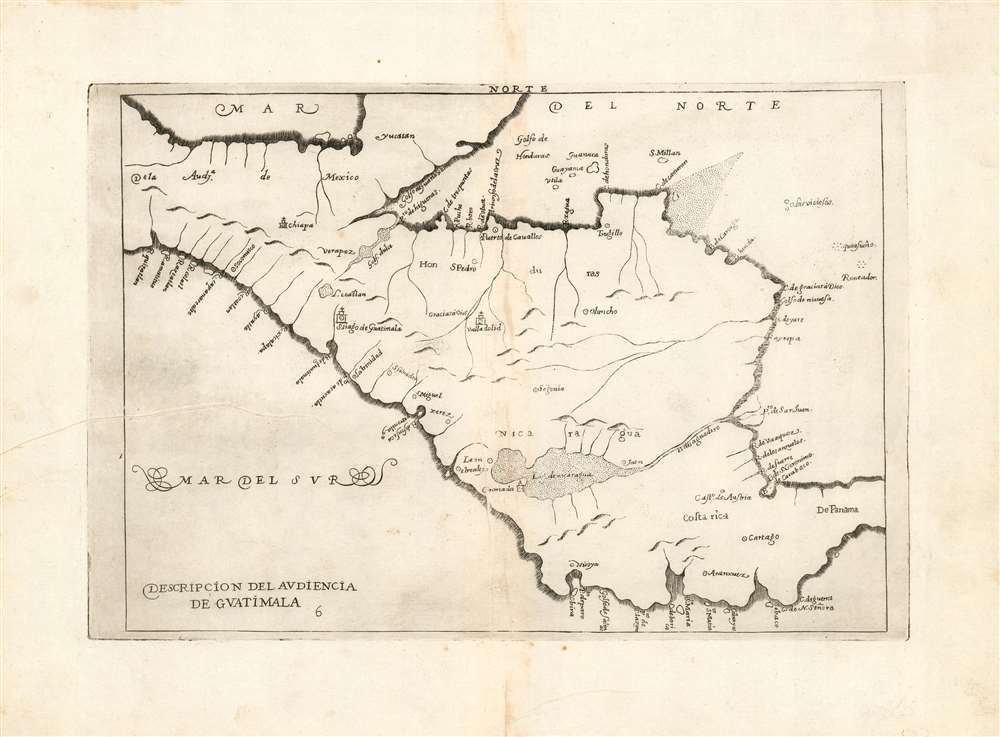 One of the few early official Spanish Maps of the New World.
$400.00

This is a handsome example of Antonio de Herrera y Tordesillas' 1726 map of the Audience of Guatemala, which includes modern-day Nicaragua, Costa Rica, Panama, and part of Mexico. It is one of the very few early maps of parts of the New World produced based on official Spanish sources. Spain for the most part maintained a strict policy of secrecy regarding its discoveries in the Americas. It was first included in Herrera's 1601 Descripcion de las Indias Occidentales, the geographical supplement to Herrera y Tordesillas' history of the Spanish exploration of the Americas. (This example is from the second Spanish edition of the work, of 1726. Despite Herrera y Tordesillas not having ever been to the Americas, this work is important in containing geographical information collected by the Spanish in the administration of their colonies, including manuscript charts of Juan López de Velasco. This particular work is one of those derived from Velasco's charts. Interior details are sparse, perhaps due to Spanish concerns of secrecy. Even so, the map shows a number of the chief colonial cities of the region: Santiago de Guatemala, Valladolid, Puerto de Cavallos, and Granada for example.

Antonio de Herrera y Tordesillas (1549 - March 28, 1626 or March 27, 1625) was a chronicler, historian, and writer of the Spanish Golden Age. He authored what is considered one of the best contemporaneous works written on the conquest of the Americas - despite never having lived or visited any part of them. As Chief Chronicler of Castile and the Americas during the reigns of Philip II and Philip III he would become one of the most prolific historians of his era. This is not to say that he was among the best. The Diccionario de historia de España, described him as an opportunistic, greedy, scheming plagiarist: not notably desirable qualities in a historian. For a courtier, these prove to be essential traits, and they served Herrera y Tordesillas well. His youthful connections would eventually bring him under the service of the Italian Prince Vespasiano I Gonzaga, to whom he became a most trusted aide. Herrera successfully leveraged this position to expand both his circle of friends and his personal wealth, and the relationship would lead to the introduction to King Philip II which made the rest of his career. His massive output ensured that he had constantly new opportunities to dedicate works to powerful potential patrons. Herrera y Tordesillas' cartographic contributions are largely contained in his 1601 Descripción de las Indias Occidentales, which is notable for containing some of the only maps produced during early colonization of the Americas that were derived from official Spanish sources, including the manuscript maps of Juan López de Velasco. Learn More...


Juan López de Velasco (c. 1530 - 1598) was a Spanish cosmographer and historian. He served as Spain's senior chronicler of the Indies in the second half of the century, during the reign of Philip II. He produced a number of charts of the Americas - of Guatemala, Panama, Chile and Mexico - which would provide the basis of the maps included in Herrera y Tordesillas' 1601 geography of the West Indies. He also created a 51-point rubric for the cataloguing of every town, village or city falling within Philip II's domains. Learn More...

Very good condition. Some dampstaining and wear at extremity of generous margins, well away from printed image.