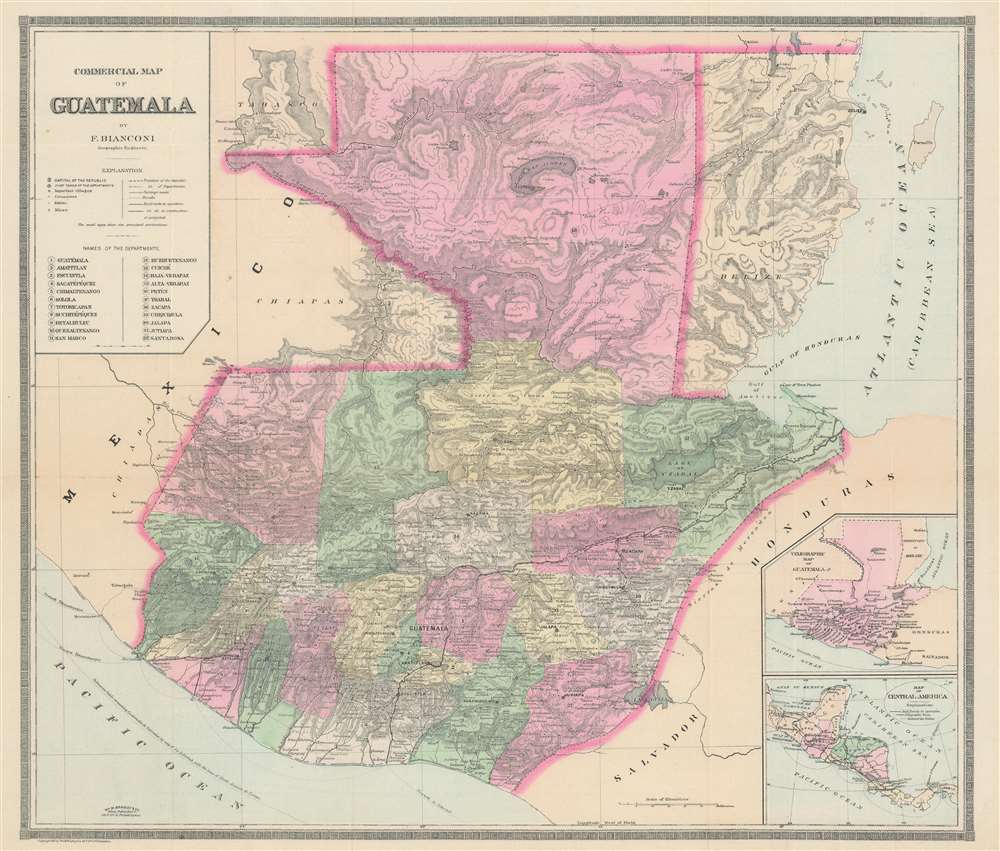 Natural resources of Guatemala along with its physical and political geography.

This is an 1891 F. Bianconi economic map of Guatemala. The map depicts the region from the Pacific Ocean and Mexico to Honduras, El Salvador, and the Caribbean Sea and from Mexico and the Caribbean Sea to El Salvador and the Pacific Ocean. As a commercial map, Guatemala's rich natural resources are extolled from Tikal to the Pacific Ocean. Small print in italics appear throughout the map in both French and Spanish indicate the different products produced, grown, harvested, or raised in a certain region, and these include sarsaparilla, vanilla, mahogany, cedar, pastureland, cotton, wheat, sugarcane, and other grains. 'Forests' is also indicated regularly, creating the presumption that these forests were used to export wood, but not a specific kind of wood, like cedar and mahogany, which are specifically named.

Highly detailed, myriad cities, towns, and villages are labeled throughout the region, including Guatemala City, Jutiapa, and Quezaltenango. All twenty-two of Guatemala's departments are numerically identified and correspond with a numerical index situated along the left border just below the key and the map's title. Roads, carriage roads, and railways, both in operation and under construction, are also illustrated. Rivers and lakes, including Lake Guija and Lake San Andres, are illustrated and labeled, as is Guatemala's topography.

This map was created by F. Bianconi and copyrighted by William M. Bradley and Company in 1891. It was published by the Bureau of the American Republics in Bulletin No. 32 in January 1892 entitled simply Guatemala.


Bradley, Garretson and Co. (fl. c. 1880 - 1900) were prominent cartographic publishers active in the later part of the 19th century. Bradley acquired Samuel Augustus Mitchell Junior's atlas plates in the late 1880s which he used to publish his own version of Mitchell's atlas. The firm had offices both in Philadelphia, at 66 North Fourth Street, and in Brantford, Ontario. Learn More...