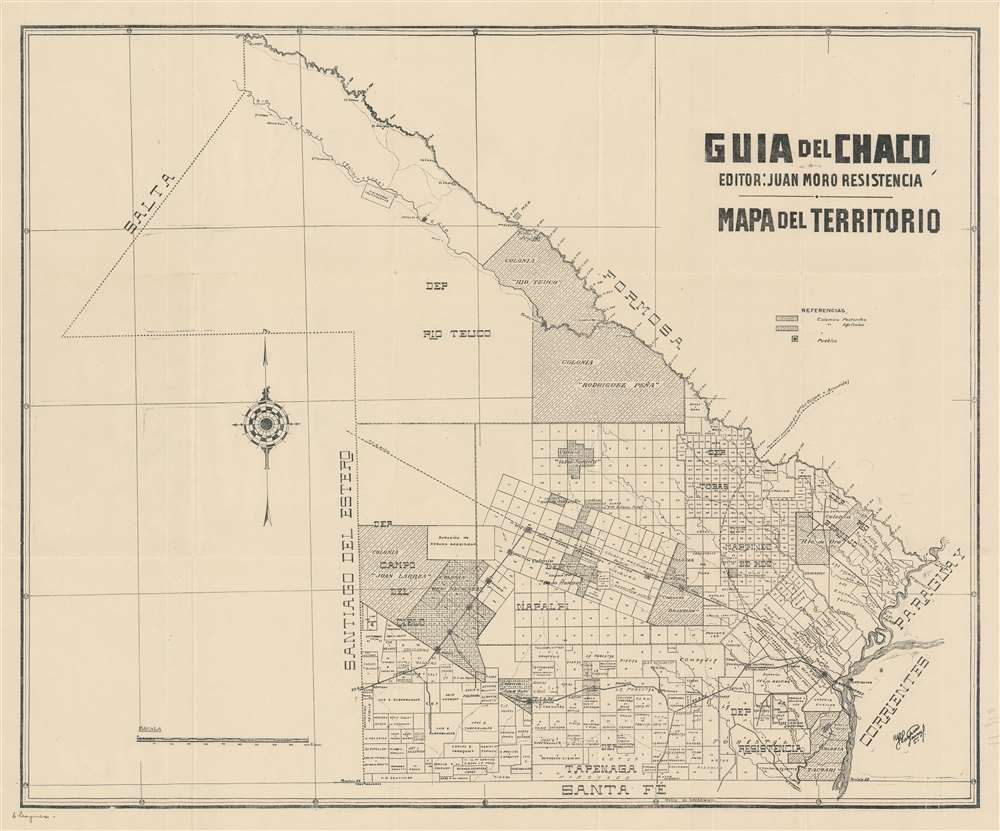 A rare map of Chaco Province in northern Argentina which was published in Resistencia, the provincial capital.
$400.00

This is a c. 1920 Juan Mora map of Chaco Province, Argentina. The map depicts the province from Salta Province and Santiago del Estero Province to Formosa Province, Corrientes Province, and the country of Paraguay and from Formosa Province to Santa Fe Province. Highly detailed, land claims throughout the province are illustrated and labeled with the owner's name, with several tracts referred to as simply 'Colonia…'. Others are identified only by a number, which most likely suggests that this part of the province had not yet been claimed. The railroad, stretching from the border with Santiago del Estero to Resistencia, the provincial capital, is illustrated and labeled with some stations identified as well.

This map was created by Juan Mora for publication in Juan Moro's Guia Annual del Chaco (Annual Guide of the Chaco), which was first published in 1920 with subsequent editions published in 1921, 1922, 1923, 1924, 1925-26, and 1935-36. We are unaware of any examples of this map in institutional collections or appearing on the private market. No editions of the Guia appear in the OCLC.

Juan Moro (September 7, 1869 - June 28, 1953) was an Italian printer and publisher who was active in Resistencia, Argentina. Born in Marbegno, Lombardy in Italy, Moro attended the Central School of Turin before emigrating to Argentina in 1887. His first job in Argentina was with a small printing firm in Buenos Aires before he found a position in the workshops of the South American Bank Company. He moved to Resistencia, in Chaco Province, 1901. Once in Resistencia he opened his own printing and bookstore on February 28, 1901. He soon gained the friendship and trust of the governor of Chaco, Enrique Luburiaga, who trusted Moro with delicate printing projects. Moro built a new building for his firm which opened in 1906, equipped with modern machines and became one of the best equipped houses in northern Argentina. Moro's firm published newspapers, magazines, memoirs, official bulletins, and the work of numerous authors from Chaco. Beginning in 1920, Moro published the Annual Guide of the Chaco (Guia Annual del Chaco), which then appeared in subsequent editions in 1921, 1922, 1923, 1924, 1925-26, and 1935-36. Moro died in Resistencia in 1953.

Very good. Light wear along original fold lines. Verso reinforcements at fold intersections. Blank on verso.
Looking for a high-resolution scan of this?