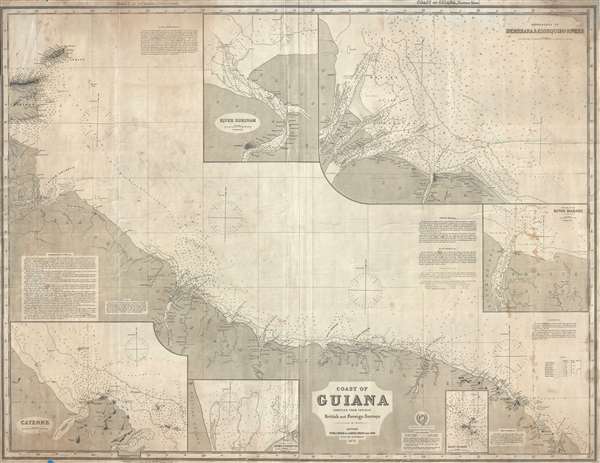 This is a large and impressive nautical chart of maritime map of the British Guiana, Surinam, and French Guiana coast in South America. The map covers from Trinidad and Tobago, and the mouth of the mouth of the Orinoco in Venezuela, east as far as Cape Orange and the River Uassa (River Oyapok), including the modern-day nations of British Guiana, Surinam (Dutch Guiana), and French Guiana. Insets detail the River Surinam, The Demerara and Essequibo Rivers, the River Maroni, Cayenne, the River Corentyn, and the Salut Islands. The chart contains copious annotations describing the difficult river navigation in this region.

This chart was originally issued in 1873, the present example has been updated to 1875. All examples are rare.

Good. Some creasing and a few verso repairs. Backed on blue paper.
Looking for a high-resolution scan of this?