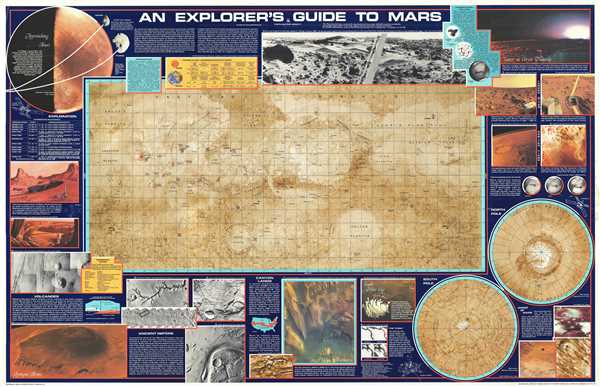 Created to promote worldwide interest in space exploration and a manned mission to Mars.

This is a 1986 Planetary Society persuasive pictorial map of Mars. With a mission to both educate and persuade, this piece informs the viewer about the current state of Martian exploration by Earthlings (as of 1986, of course) in an effort to stoke interest in continuing the effort to launch a manned mission to the Red Planet. Photographs, artist's renderings, and a large topographic map all play a role in creating a visually stunning and intellectually stimulating work. Several highlights on the 'Martian World Tour' are illustrated here, each of which are numerically identified on the central topographic map. The tour begins at the landing site of Viking 1, the first spacecraft to successfully land on Mars. The Martian polar ice caps (on both the north and south poles) are rendered, beside photographs of Martian storms and the Valles Marineris, a 4,000-kilometer-long canyon that dwarfs the 450-kilometer-long Grand Canyon in Arizona. Photographs of what researchers believe to be ancient waterways on the surface of Mars are also present, along with a computer-generated image of Olympus Mons, which measures 16.8 miles high (Everest only manages 5.6 miles in elevation) and 550 kilometers in diameter, making it the largest volcano in the solar system. The final image is, of course, an artist's rendering of the first human explorers on Mars.

This map was created and published by The Planetary Society in 1986.

The Planetary Society (1980 - Present) is an American non-governmental nonprofit foundation involved in research, public outreach, and political advocacy for engineering project relating to the fields of astronomy, planetary science, and space exploration. Founded in 1980 by Carl Sagan, Bruce Murray, and Louis Friedman, the Planetary Society counts over 50,000 members in more than 100 countries worldwide. The Society states its mission as 'To empower the world's citizens to advance space science and exploration.' Learn More...