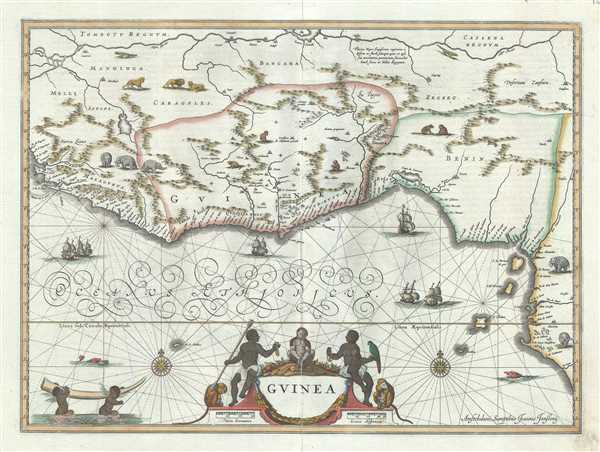 This is a rare and attractive c.1660 map of West Africa by Jan Jansson. It depicts the African Gold Coast, Ivory Coast and Slave Coast from Guinea south through the modern nations of Sierra Leone, Mali, Liberia, Burkina Faso, Cote D’Ivoire, Ghana, Togo, Nigeria, Cameroon, Equatorial Guinea and Gabon. Extends inland to include the Niger River. The coast is highly detailed. Here was can see the practice satirized by Jonathan Swift regarding the lack in information on the interior, they had to 'place elephants for want of towns.' Indeed the interior is decorated with stylized renderings of African animals including lions, elephants, cheetahs, and apes. On the water several sailing vessels are depicted. In the lower left an elaborate decorative Cartouche labeled the region simply Guinea. On the bottom left, two cherubic Africans haul a gigantic elephant tusk. This map was issued by Johannes Janssonius in his Atlas Novus.