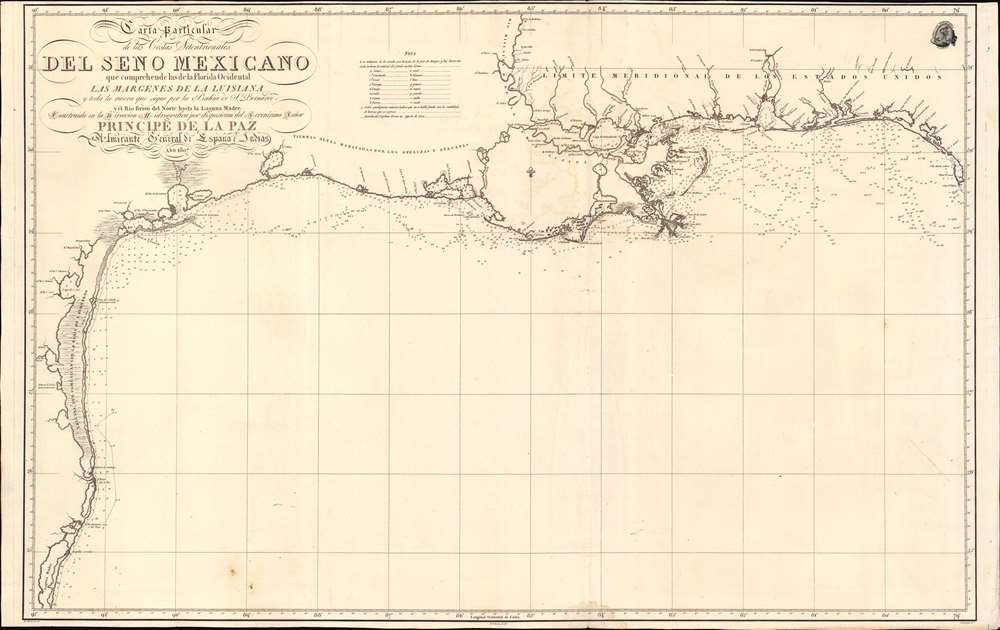 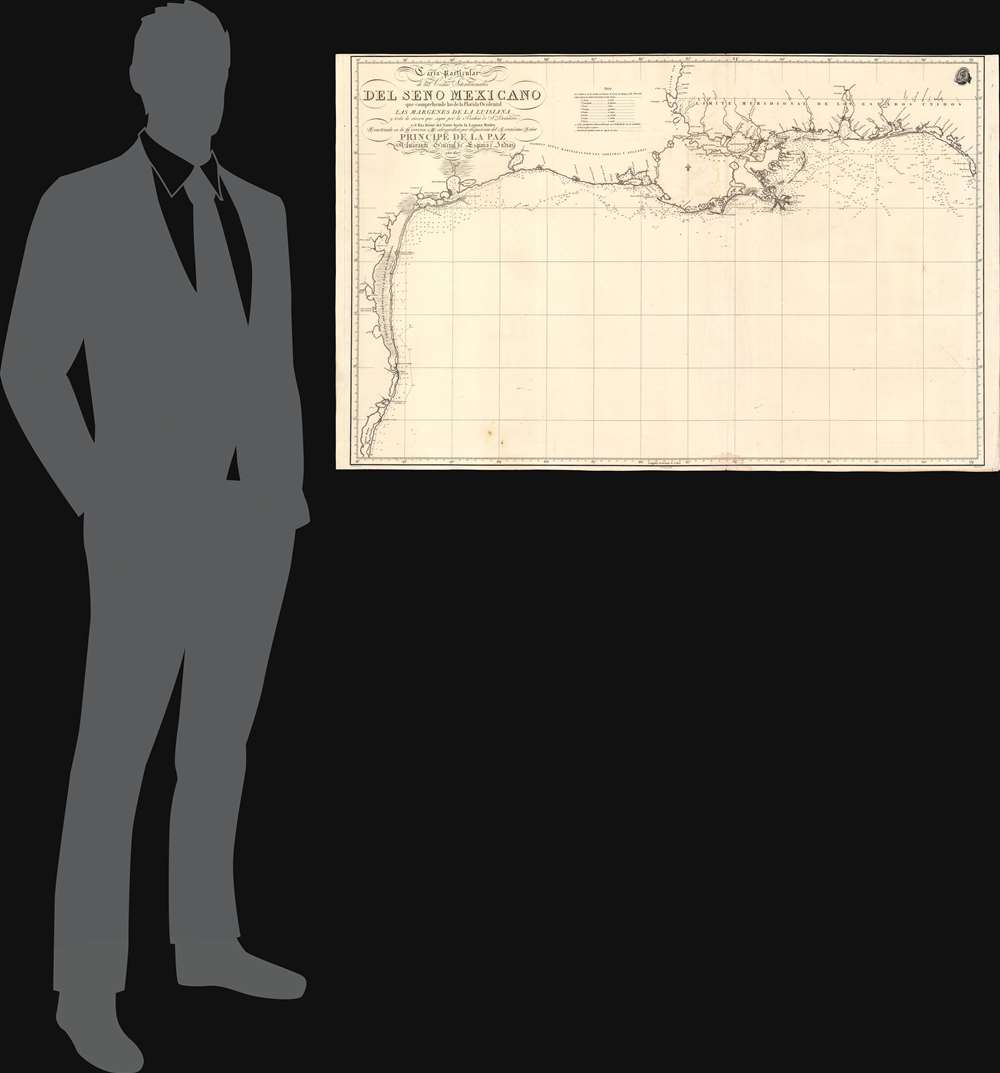 'The first large-scale printed chart of the Texas coast based on actual soundings and explorations.' - Martin and Martin

One of the most important maps of Texas, considered 'the first large-scale printed chart of the Texas coast based on actual soundings and explorations' (Martin and Martin). This is the 1807 Spanish Direccion Hidrografica map of the Gulf Coast in the vicinity of Texas and Louisiana. The chart follows directly on the seminal Jose Antonio de Evia (1740 - 18??) survey of the Gulf Coast, conducted between 1785 and 1786. This was the first scientific mapping of this region, resulting in, among other things, the naming of Galveston Bay. The Evia survey resulted in two subsequent maps, the 1799 Carta Esferica que Comprehende las Costas del Seno Mexicano - essentially a general chart of the Gulf of Mexico, and this more specific 1807 map offering considerably more detail to the costliness of Texas and Louisiana.

Roughly centered on modern day Vermillion Bay, coverage extends along the Gulf Coast from Laguna Madre, Mexico (just south of the border) to Cape San Blas, Florida. The chart offers a wealth of detailed soundings precisely following Evia's tracks. Of note are some of the river systems and inlets, which although treated minimally offer more accuracy than any previous chart. In particular, note the precise mapping of the Mississippi Delta and the complex network of bays, lakes, bayous, and rivers between Vermillion Bay and Mobile Bay, and inland as far as Natchez.

From 1763, when the British seized Florida during the Seven Years War (1856 - 1863), until 1783, Spanish and British navigators vied for control of the Gulf of Mexico. The tension led to a dearth of good nautical survey work. The best available preceding maps were those published in Jeffery's West India Atlas, 1775, which Streeter described as 'an almost meaningless jumble' (Streeter 1029). After Britain lost the American Revolutionary War (1775 - 1783), Florida was retroceded to Spain, granting Spanish navigators unimpeded access to the coast. Consequently, in 1783, Bernardo de Gálvez (1746 - 1786), the newly assigned interim governor of Spanish Louisiana, commanded Jose Antonio de Evia (Josef de Hevia; 1740 - c. 1798) to explore the Gulf Coast from West Florida to Tampico. After a failed 1783 attempt, the expedition proceeded, and from 1785 to 1786 the coasts of Florida, Alabama, Mississippi, Louisiana, Texas, and Mexico were scientifically mapped for the first time. Evia also successfully explored, via lugger and canoe, rivers and inlets along the coast - an exceptionally arduous task performed under harsh conditions. Among his achievements, he explored San Bernardo Bay, naming it Galveston (Gálves-Town) to honor Gálvez. Evia's accurate and detailed charts, diaries, and descriptions of the Gulf area were the finest produced in the eighteenth century. His surveys served as the underpinning of Gulf Coast hydrography for decades, until superseded by the mid-19th century work of the U.S. Coast Survey. Two charts in specific were seminally important, the 1799 Carta Esferica que Comprehende las Costas del Seno Mexicano and this map, the more detailed 1807 Carta Particular de las Costas Septentrionales del Seno Mexicano. Despite an interval of 8 years, no intermediary charts were issued - possibly to keep the strategically valuable results of the Evia Survey under wraps.

The preset example is the 1807 first edition of this important chart, published in Madrid by the Direccion Hidrografica. The chart was compiled by Miguel Moreno (fl. c. 1792 - 1845) and engraved by Ferdinand Selma (1752 - 1810) - who also engraved the Carta Esferica que Comprehende las Costas del Seno Mexicano. It was subsequently slavishly copied in the 1820s by the French Dépôt des Cartes et Plans de la Marine and the British Admiralty. A second edition, without significant revision, was issued in Mexico in 1825 - testimony to the map's accuracy and longevity. Derivative maps by both the Direccion Hidrografica and other foreign hydrographic agencies appear from time to time, but the first edition, as here, is exceedingly rare and can be considered one of the most important maps of Texas to appear in the 19th century. Rare. We note examples at Baylor University, the Biblioteca Nacional de España, the Museu Marítim de Barcelona, and the Bayerische Staatsbibliothek. There is possibly a fourth example at the Virginia Garrett Cartographic History Library at the University of Texas Arlington.


Miguel Moreno (fl. c. 1792 - 1845) was a Spanish cartographer and draftsman active with the Depósito Hidrográfico in Madrid during the first half of the 19th century. Hs served in the Spanish royal navy as a pilot as early as 1808. By 1807 he was producing nautical charts for the Depósito Hidrográfico. He participated in the geographical expedition to South America of Cosme Damián Churruca (1792 - 95), which included the Antilles. Moreno was widely considered the Depósito Hidrográfico's primary expert on the Gulf Coast and Puerto Rico. Learn More...


Ferdinand Selma (1752 - January 8, 1810) was a Spanish line engraver active in Madrid with the Direccion Hidrografía in the late 18th and early 19th centuries. Selma was born in Valencia and died in Madrid. His is best known for his engravings for his 1788 Illustrations de Relacion del ultimo viage al estracho de Magallanes. Learn More...