1717 De Fer Map of the Florida, the West Indies, and Central America 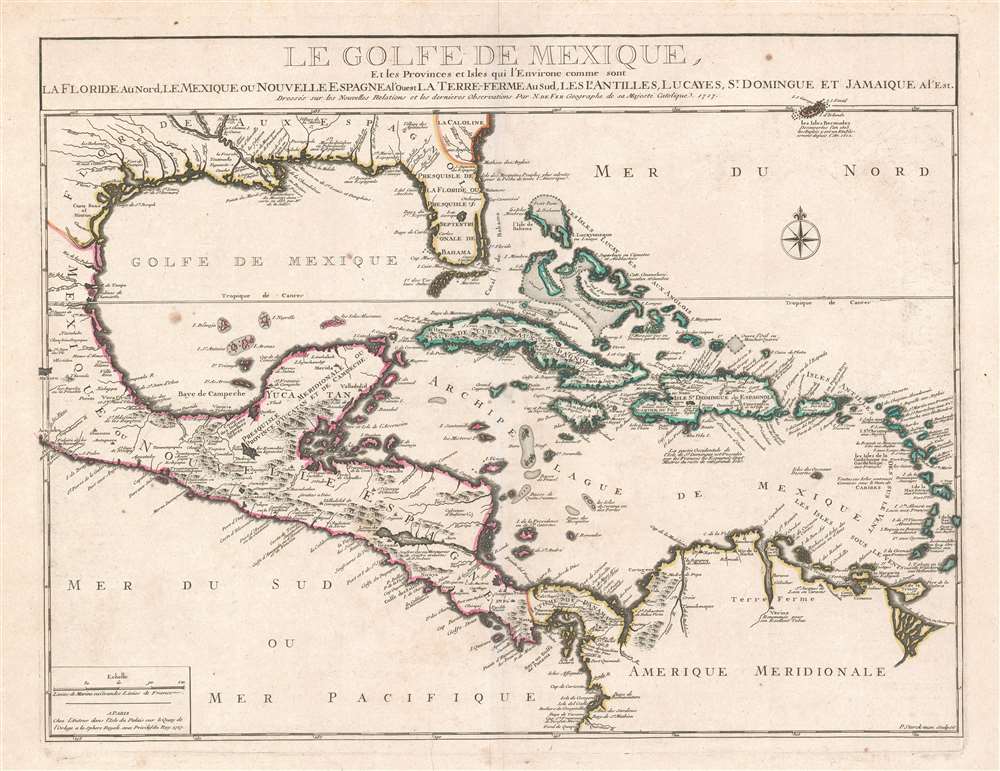 1717 De Fer Map of the Florida, the West Indies, and Central America

The ambition of a French Empire in America.

This is a beautiful example of Nicholas De Fer's rare 1717 map of Florida, the West Indies, the Gulf of Mexico and Central America. This region was central to French ambitions for an American empire, and follows upon the establishment of La Salle's colony on Matagorda Bay, and d'Iberville and Bienville's fortification of the Mississippi (Fort de Missisipi). Just one year after this map was issued, in 1718, Jean-Baptiste Le Moyne de Bienville founded New Orleans. Centered on Cuba, coverage extends from roughly Cape Fear to the Equator and from the Mexico City to Barbados. Bermuda, along with its surrounding shoals, breaks the border on the upper right. It is distinctive for its sophisticated mapping of the Gulf Coast and Florida, a region then little known but heavily disputed.

De Fer remarkably defies the conventions of his time and offers a reasonably accurate mapping of Florida. At the time, most cartographers, including De Fer's fellow Geograph de Roi Guillaume de L'Isle, in struggling to represent the Everglades, drew south Florida as an archipelago. De Fer, by contrast, illustrates Florida in peninsular form, with the larger keys, including what would become Miami Beach, Key Biscayne, and Key Largo, recognizably delineated. In western Florida, Gasparilla Sound (Baye de Carlos) and Tampa Bay (Baye de Se. Esprit) are also clearly defined. Lake Okeechobee is identified as Lac Serrope, a natural wonder that few Europeans had at this point seen, but which appeared on maps as early as 1565.

De Fer offers a sophisticated presentation of the Gulf Coast including a broadly accurate mapping of the Mississippi Delta and Matagorda Bay. He correctly maps René-Robert Cavelier, Sieur de La Salle's settlement on Matagorda Bay as well as the fort Bienville constructed on the Mississippi River. Much of the impressive inland detail, which includes indigenous villages and tribal groups, can be associated with the explorations and trade missions of Pierre Le Moyne d'Iberville (1661 - 1706), who traveled extensively in the vicinity of the Mississippi between 1698 and 1702.

Of note is the 'Detour a L'Anglois' or the 'English Turn'. Bienville, while exploring the Mississippi Delta, encountered the English frigate Carolina Galley, on a colonizing mission. The 19-year-old Bienville successfully rebuffed the English captain, who departed peacefully. The turn in the river where he encountered Carolina Galley is still known as the English Turn. It was also this encounter that led Bienville to establish 'Fort de Missisipi' (Boulaye) just to the south and, later, New Orleans.

The French were at this time pursuing a vast American empire. They planned to link the Saint Lawrence and Mississippi basins, thereby bottling up the English on the Atlantic coast and dividing Spanish claims in Florida and Mexico. The English threat is evident in 'La Caroline aux Anglois' appearing at the far right. Spanish claims are likewise recognized to the east of Mobile Bay in Pensacola and St. Marie. Although La Salle's colony at Fort de François failed disastrously, the subsequent settlement of New Orleans flourished, becoming the heart of French Louisiana.

There is much confusion regarding the source of this map, with most historians lumping it with De Fer's 1718 Partie Meridionale De La Riviere De Missisipi as having been derived from De L'Isle's manuscript map of 1701, Carte hydrographique de l'Amérique septentrionale. More likely, however, is that De Fer used Deslongchamps' 1711 Carte hydrographique de l'Amérique septentrionale, which, while utilizing the De L'Isle cartography of 1701, is more sophisticated. The connections become clear upon a detailed study of the toponomy. It is not surprising that the Deslongchamps map has not been previously cited in relation to this map, as it is itself extremely obscure, surviving only at the BNF, and Deslongchamps being a mostly unknown figure.

This map was separately published but often added to earlier De Fer atlases post-publication. It also occasionally appears in composite atlases by De Fer and others. It was published by De Fer from his office on Quai de l'Horloge, Paris. The map was engraved by Pieter Starckman. It is scarcer that similar contemporaneous maps by De Fer and rare to the market.


Pieter Starckman (fl. c. 1680 - 1730), a.k.a Peter or Petrus, was a Dutch engraver active in the late 17th and early 18th centuries. Starckman was likely born in Amsterdam in March of 1655, the son of Steven Starckman and Atalijntge van Oostijnen. During much of his career he was active in the Hague, but some records suggested that in the early 18th century he held a royal appoint in France as Graveur du Roy en Geograpie, Fortifications et Marines. Starckman engraved for numerous cartographers as well as on his own account, usually signing his work as 'P. Starckman'. He collaborated with the finest mapmakers of his day, including De Fer and De L'Isle. Learn More...

Very good. Some minor spotting. Even toning. Original centerfold exhibits minor wear. Blank on verso.
Looking for a high-resolution scan of this?