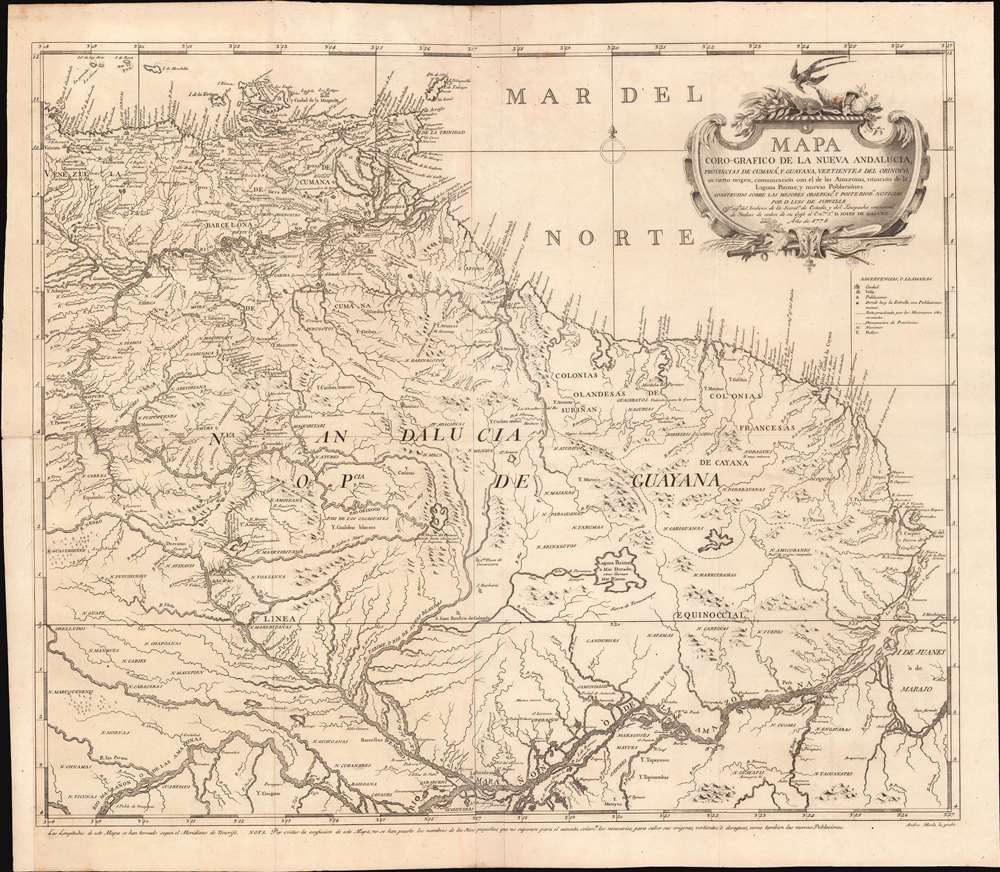 An extraordinary 1778 Spanish map of northern Brazil, eastern Venezuela, and Guyana prepared by Luis de Surville y Villerey. When it was issued, this was the most comprehensive study of the overlapping and complex Orinoco-Amazon-Rio Negro basin system. The region covered extends roughly from Peurto Cabello (west of Caracas) south to the Amazon River, and east to the mouth of the Amazon. The map notes boundaries, river systems, indigenous communities, missions, and more. It identifies the Casiquiare Canal - a unique river route connecting the Orinoco with the Rio Negro (and hence the Amazon) - thought a myth despite indigenous knowledge until confirmed by Charles Marie de La Condamine (170 1 - 1764). It also notes Lake Parima - in two locations - believed in earlier generations to be the site of the golden city of Manoa or El Dorado.

Although sparsely populated, this region was the focus of vigorous Jesuit missionary activity. The Jesuits were attempting to establish a profitable Reduction (Reducciones Jesuiticas) system such as existed in Paraguay and Argentina. Here they were met impenetrable jungle, low population density, and vast plains subject to annual flooding. Nonetheless, a series of successful Reductions were established, mostly in the Andean foothills and Llanos. Other missions extended along the Caroni River. The Jesuit order was expelled from the Spanish Empire in 1767 - shortly after this map was made, but many of their old missions remain.

Surville here maps Lake Parima in two locations, one identified as the 'Origen del Orinoco' then other as 'Laguna Parime, ò Mar Dorado'. He does not, as many of his predecessors, go so far as mapping the mythical city of El Dorado or Manoa on its shores.

Lake Parima appeared on maps following the explorations of Sir Walter Raleigh (c. 1552 - 1618) - who claimed to have discovered El Dorado, what he called 'Manoa' on the shores of a great inland sea beyond the Guyana Shield. Subsequently, most Europeans believed the most likely site of El Dorado to be located somewhere in Guyana, Venezuela, or northern Brazil. Raleigh never claimed to have seen the city of Manoa himself, but one of his underlings, Lawrence Kemys (15?? - 1618) was sent in search of it. Kemys pushed east from Orinoco near modern day Ciudad Bolivar (Angostura), into Guyana, where he encountered the Essequibo River. It was there that he picked up the trail of Lake Parima, described by indigenous peoples as resting on a great lake over 200 leagues wide.

This lake, although no longer mapped as such, does have some basis in fact. Recent geological studies suggest that in the 16th and as late as the 17th centuries, a large lake did exist there. Its remains, Lake Amaku, still rise and fall with the rainy season. During exceptionally rainy or El Nino years, Amaku can rise enough to inundate much of the Parima Flood Plain, creating the appearance of a vast inland sea. To underscore this, we have personally seen the remains of cargo ships that navigated down the Essequibo and onto the Parima / Rupununi before the water receded, leaving the ships beached hundreds of miles from navigable waters.

Parts of the Amazon were, at the time, dominated by a large and powerful Indigenous trading nation known as the Manoa - a name that appears on some early maps of the Amazon Basin. The Manoa traded the length and breadth of the Amazon. The onset of the rainy season inundated the great savannas of the Rupununi, Takutu, and Rio Branco or Parima Rivers. This inundation briefly connected the Amazon, Orinoco, and Essequibo systems, opening an annual and well used trade route. The Manoa through their trade networks, had access to gold mines, and so, when Raleigh saw gold rich Indian traders arriving in Guyana, he made the natural assumption for a gold hungry European in search of El Dorado. When he asked the Orinocans where the traders were from, they could only answer, 'Manoa.' Thus did Lake Parima and the city of Manoa begin to appear on maps in the early 17th century. The city of Manoa and Lake Parima continued to be mapped in this area until about 1800.

This map was prepared in 1778 by Luis de Surville for inclusion in Franciscan missionary Antonio Caulín Martínez's seminal Historia Coro-graphica Natural y Evangélica de la Nueva Andalucía Provincias de Cumaná, Guayana y Vertientes del Orinoco. The work was a seminal account of Venezuela and Guyana, recorded from actual observation during Caulín's efforts to evangelize the Caribes and Tomuza tribes. The cartography further benefits from Caulín's time with the Jose de Iturriaga (1699 - 1767) to settle border questions regarding the limits of Spanish and Portuguese dominions in the Orinoco. Both the work and the separate map (as here) were published in Madrid, Spain, and are today extremely rare. We note five separate examples of the map in the OCLC, and about 15 verifiable examples of the book.

Luis de Surville y Villerey (c. 1737 - November 22, 1789) was Spanish military engineer and cartographer active in Madrid, Spain, in the second half of the 18th century. Surville is a second-generation engineer. He studied mathematics at the Real Seminario de Nobles de Madrid and afterwards was a cartographer and master draughtsman at the same from 1767 to 1776. Afterwards he was recommended by José de Gálvez (1720 - 1787) to post of 2nd draftsman at the Despacho de Indias (Office of the Indies). Like most cartographers in the Despacho de Indias, Surville was not himself an explorer and did not travel extensively, instead his work focused on compiling and reconciling cartographic information collected by explorers and missionaries abroad - as well as military documents associated with European Wars. He died in Madrid in 1789. Learn More...


Andrés Muela (1760 - 18xx), also known as Andrés de la Muela, was a Spanish artist, printer, and engraver active in Madrid in the second half of the 18th century and the very early years of the 19h. He is best known for his devotional ephemera, but he also produced maps, botanicals, and zoological prints. His last known work is a zoological image of an anteater dating to 1804. Learn More...