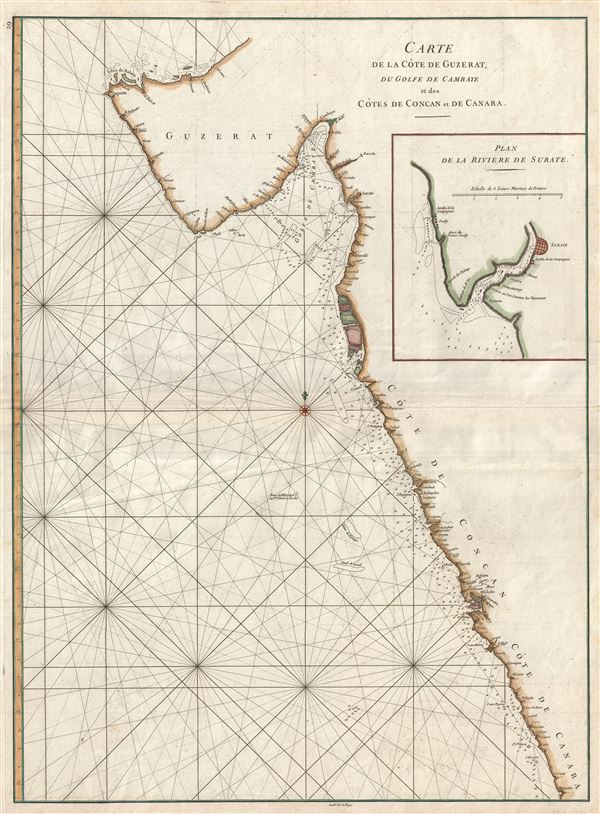 One of the few early maps to detail the original seven islands of Bombay.

A scarce 1775 nautical chart or maritime map of the coasts of western Indian in the vicinity of Bombay (Mumbai) and Goa. Composed by Jean-Baptiste d'Apres de Mannevillette, this map covers from Gujarat and the Konkan coasts, from the Bay of Cambaye (Gulf of Khambhat), Surate, and Bombay, to Goa and the Coast of Kanara. One of Mannevillette's most important charts, this map offers significant updates over most earlier charts, with countless soundings and corrections. This is most significantly one of the few maps to illustrate the seven islands, now connected, that compose modern day Bombay or Mumbai. The practice was abandoned only a few years later as the water passages between these islands began to be filled-in or silted-up.

The basic cartography of this map dates to Mannevillette's voyages as pilot for the Compagnie des Indies in the early 1700s. It was originally published in Paris in 1745. This may well be the 1745 edition, but it is unclear as no major changes seem to have been made between the first and second editions. In any case it was republished in 1775 in an expanded second edition of the Neptune Oriental

The map offers rich detail including countless depth soundings, notes on the sea floor, commentary on reefs, rhumb lines, shoals, place names and a wealth of other practical information for the mariner. This chart was drawn by Jean-Baptiste d'Apres de Mannevillette and engraved by Guillaume-Nicolas Delahaye for publication in the 1775 Neptune Oriental.

Very good. Minor printing press crease left side, near centerfold.
Looking for a high-resolution scan of this?