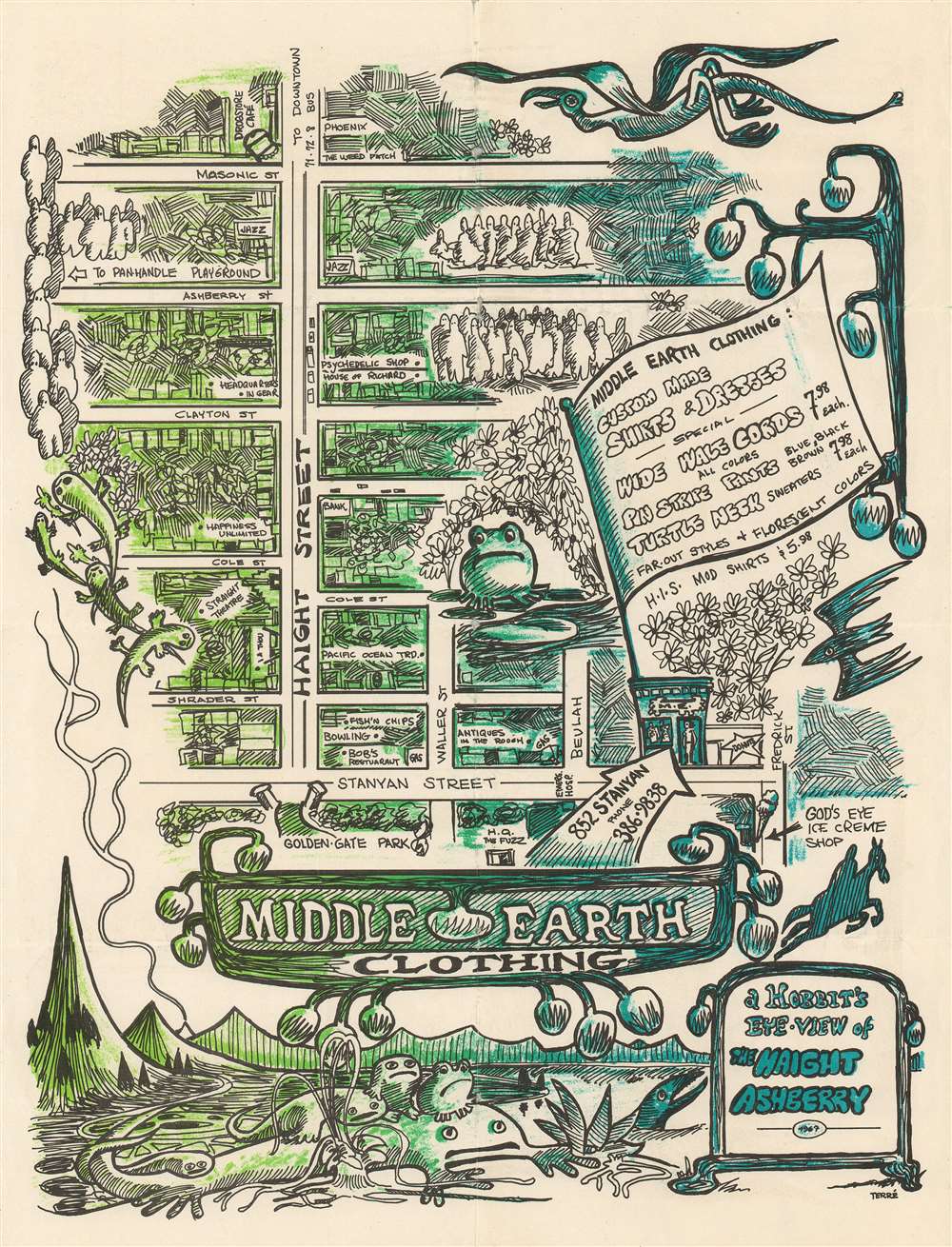 The Summer of Love and Haight-Ashbury

Also called Flower Children, hippies were suspicious of the government, rejected consumerist values, and opposed war. The hippie movement reached its peak in the summer of 1967, called the Summer of Love, when over 100,000 people congregated in San Francisco around the intersection of Haight Street and Ashbury. The small neighborhood could not handle the massive influx. Overcrowding, hunger, drug problems, homelessness, and crime rose precipitously. By the fall of 1867, hippies began to filter out of the neighborhood. Those that remained even held a mock funeral declaring 'The Death of the Hippie'.

We know little of the Middle Earth Clothing Company. Per the advertisement, it was located at 852 Stanyan Street. The company sold 'custom made shirts and dresses' and 'wide wale cords.' There were at least two locations, one on Stanyan Street, and another on Grant Avenue. The company went out of business around 1970. Eventually the Grant Avenue location was replaced with a Chinese beauty salon. In 2013, the beauty salon awning was removed and well preserved the beautifully hand painted sign for the Middle Earth Clothing Company was again brought to light.

This map was drawn by the San Francisco artist Nathan Terré. There appear to have been at least two editions, which are identical save for color scheme.

Nathan Terré (1938 - Present) is an American artist, art restorer, antique dealer, and art collector. Terré traveled extensively studying art throughout the United States. He was involved in the art-nouveau inspired Fillmore Art movement in the 1960s, and was in San Francisco for the 1967 Summer of Love. There he illustrated promotional material for the Straight Theater, the Middle Earth Clothing Company, and 'The Charlatans,' a band he also managed. He finally settled in Missoula, Montana, in 1974 (or earlier), where he runs the antique shop and restoration studio Atelier Boheme. Terré also does appraisals for the Antiques Road Show. Learn More...

Very good. Minor verso reinforcements along some folds.
Looking for a high-resolution scan of this?