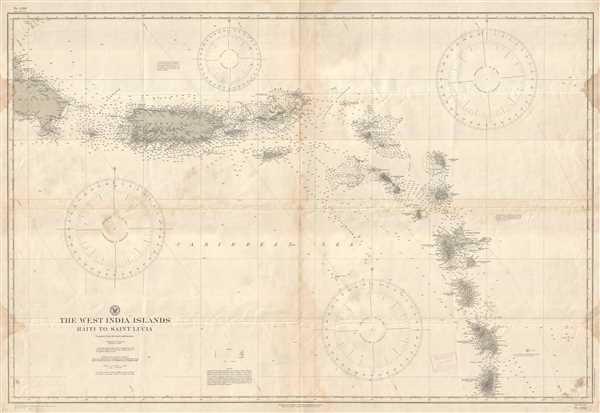 This is a 1917 U.S. Hydrographic Office nautical chart or maritime map of the Lesser Antilles. The map depicts the region from the extreme eastern part of the Dominican Republic to Saint Lucia and includes Puerto Rico, the Virgin Islands, Montserrat, Antigua and Barbuda, St. Kitts and Nevis, Guadeloupe, Dominica, and Martinique. Myriad depth soundings are noted throughout, though they are concentrated in coastal waters near the islands, in passages between the islands, and the most-traveled shipping lanes. Locations along the coastline of each of the islands are labeled, as are cities, towns, and mountains. A railroad is illustrated along two-thirds of Puerto Rico's coastline as well. Notes concerning tides, currents, and other navigational topics are also noted, as is information concerning notations indicating lights, buoys, and the composition of seabeds.

This map was compiled and published by the U.S. Hydrographic Office in 1917.

Good. Even overall toning. Blank on verso.
Looking for a high-resolution scan of this?