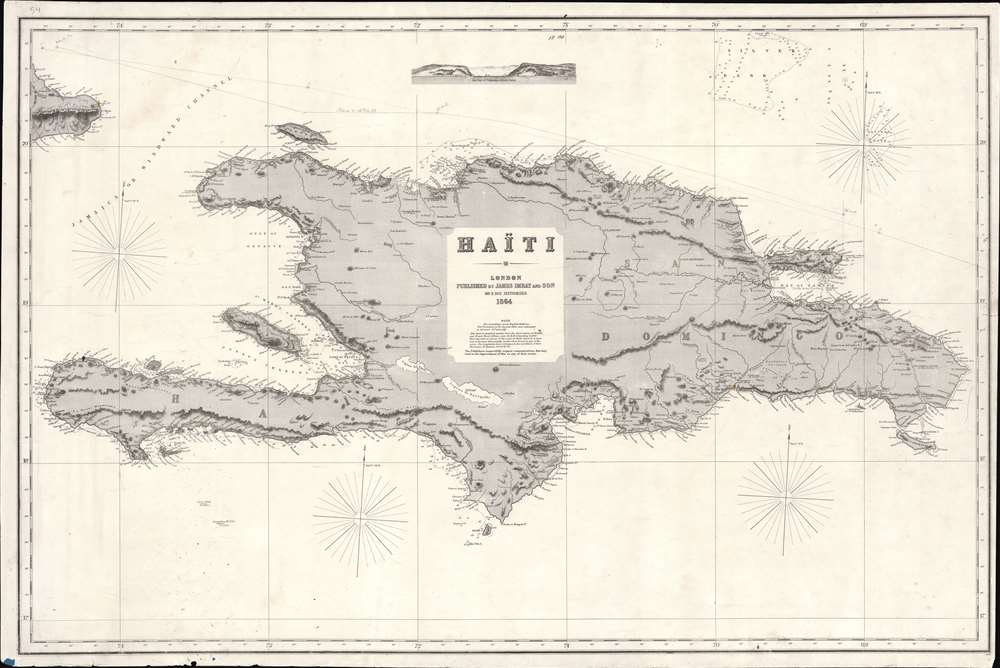 This is a rare 1864 James Irmay and Son blueback nautical chart or maritime map of Hispaniola or Santo Domingo, here identified as 'Haïti'. The chart is large and finely engrave with ample coastal detail, some inland topography, and depth soundings throughout. Pencil marks trace a Spanish voyage, likely out of Cadiz, along the northern coast of the Island.

When this map was issued, Hispaniola was dived between two rival powers, despite being singularly identified as 'Haïti' here. Haiti, primarily occupied by French-speaking former slaves, composed of the eastern 2/3rds of the island. The Spanish-speaking Santo Domingo, today's Dominican Republic, occupied the eastern third. The entire island, at the time, was in political disarray. Haiti was controlled by Guillaume Fabre Nicolas Geffrard (1806 - 1878), the self-styled 'Duke of Tabara', former general and President of from 1859 t 1867. On the Dominican side of the island, Pedro Santana y Familias (1801 - 1864) was attempting to return Santo Domingo to Spanish rule, despite significant internal protest, leading to the Dominican Restoration War (1863 - 1865). In the year after this map was made, Santana died and Buenaventura Báez (1812 - 1884), established the Second Dominican Republic, becoming its first president.

This map was published in London by James Imray and Son, chartmakers, in 1864. This is most likely the first edition, as it is the earliest we have identified. Curiously, the map was printed on the back of another chart - depicting the Thames Estuary, also by Imray, giving some insight into the firm's 'recycling' operation.

This chart is extremely rare, with no recorded holdings of the map in this edition. Brown University has an 1882 edition. The Bibliothèque nationale de France another dated 1867. And a third example is cataloged at the Museu Marítim de Barcelona.