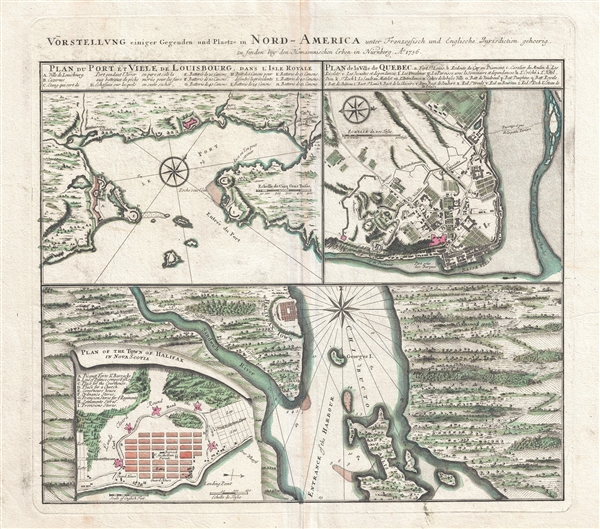 Stunning map of several important Canadian cities during the French and Indian War.
$750.00

An attractive 1756 Homann Heirs map of the Canadian cities of Halifax (Nova Scotia), Louisbourg (Nova Scotia) and Quebec City (Quebec) at the outset of the French and Indian War (1756 – 1763). Essentially four maps on one sheet. Homann no doubt issued this map with the intention to take advantage of continental interested in the events of the French and Indian war or, as it was known in Europe, the Seven Years War.

The primary map, occupying the lower two quadrants, illustrates Halifax town and harbor just seven years after being founded by the English in 1749. The map details the entrance to Halifax Harbor, the town, and some of the surrounding countryside. A large inset map, in the lower left quadrant, illustrated the town of Halifax in greater detail with special attention to its defenses and fortifications. These maps feature English text suggesting that Homann Heirs derived the content form English sources.

This is a sharp contract to the to upper maps, of Louisbourg and Quebec, which at this time were still in French control and exhibit French text. The Louisbourg map, occupying the upper left quadrant covers the port, its entrance, and some of the surrounding territory. Louisbourg was the primary French fortress in the region and an essential conquest for control of the Gulf of Saint Lawrence. One year after this map was made, in 1858, the British seized Louisbourg and raised its defenses.

The Quebec map, appearing in the upper right quadrant, is heavily focused on the city of Quebec and features considerable detail. The city's impressive fortifications as well as the surrounding farm land are clearly depicted. The block structure of the Basse Ville, or Lower Town is also well illustrated. Quebec was the capital of French North America. It was strategically situated, as this map suggests, on a promontory overlooking the Saint Lawrence River. Considered by many to be impregnable, the British General James Wolfe outsmarted the French commander, the Marquis de Montcalm, to battle on the open field, where he was defeated. The British took control of the city and sealed the fate of French America.