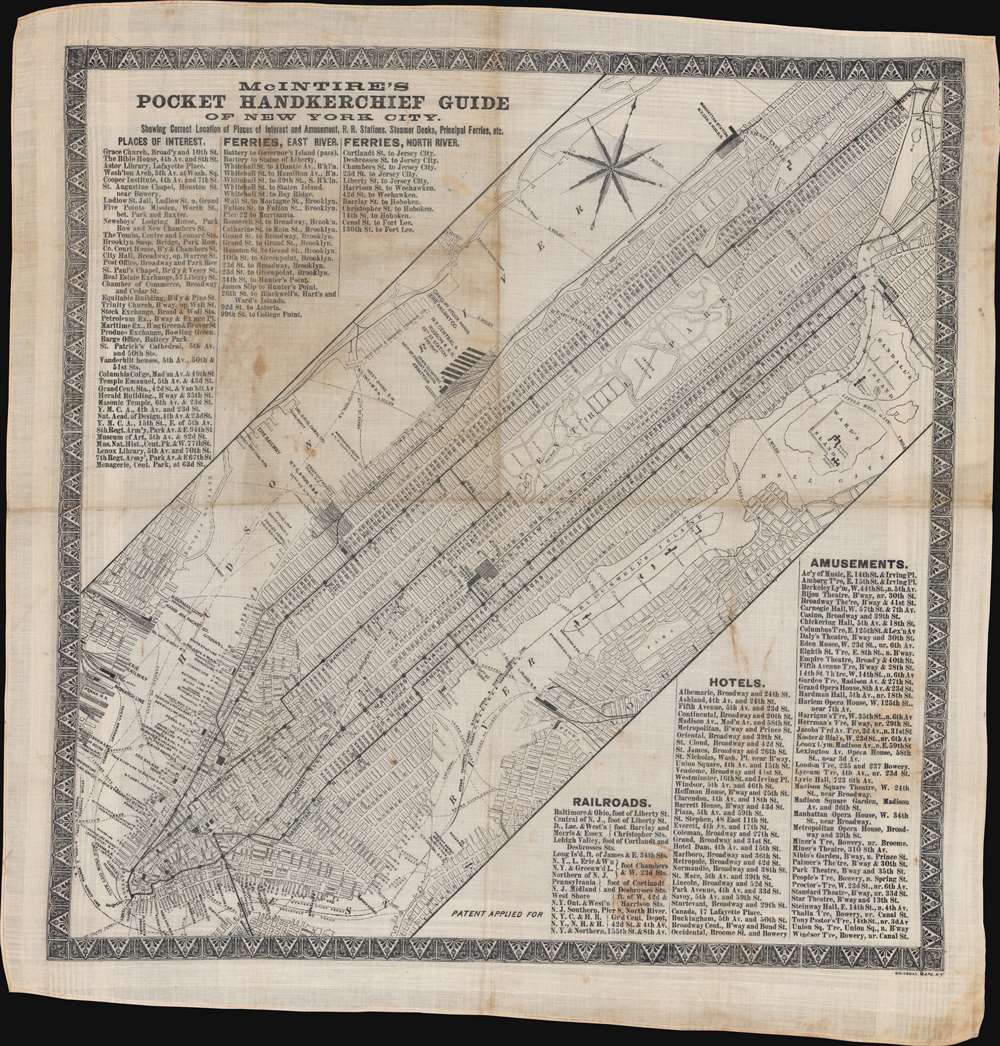 Wipe the sweat from your brown and navigate the elevated train!
$4,500.00

This is a rare c. 1869 Bridgman and McIntire pocket guide map of New York City - most likey the first commerical map to show public intraurban train transport in New York City. It follows shortly after the development of New York's Elevated Train System - the city's first viable public transportation and the precursor of the modern system. Straphangers needed a practical guide to the new system and what could be better than the 'weather proof', 'tear proof', and utilitarian handkerchief map - wipe the sweat from your brown and find your way! Published as 'McIntire's Pocket Handkerchief Guide of New York City', the map depicts Manhattan from the Battery north to West 155th Street and the southern Bronx.

Elevated train lines are along Second, Third, Sixth, Ninth, and Tenth Avenues are illustrated and generally labeled 'Manhattan Elevated Rail Road'. Railroads played an important role in New York City in the mid-19th century, but only the New York Central and Hudson Railroad and the New York and New Haven Railroad operated rail lines in Manhattan. All other rail lines ended on the banks of the Hudson River in New Jersey and passengers were transported across the river by ferry. Even the Long Island Railroad did not operate in Manhattan at the time, with passengers directed to a ferry. Also, there were not yet bridges across the East River, thus necessitating ferry lines between Williamsburg and Manhattan.

Streets and avenues throughout Manhattan are identified. New York served as a major commercial center, with most imports arriving by sea. Piers line the Hudson River and the East River in Lower Manhattan, many of which are identified by the operating shipping or railroad line. A handful of landmarks are identified, such as the American Museum of Natural History (which opened in 1869), Grand Central Station, and an insane asylum in the Upper West Side. Central Park appears in some detail, with Croton Reservoir, two receiving reservoirs, and The Ramble noted. Indexes of points of interest and ferries across the East and North rivers occupy the upper left, while indexes of railroads, hotels, and amusements appear in the lower right.

This map was created and printed by Bridgman Maps and published by McIntire c. 1869. This is the only known cataloged example.

Good. Printed on cloth. Some soiling.
Looking for a high-resolution scan of this?