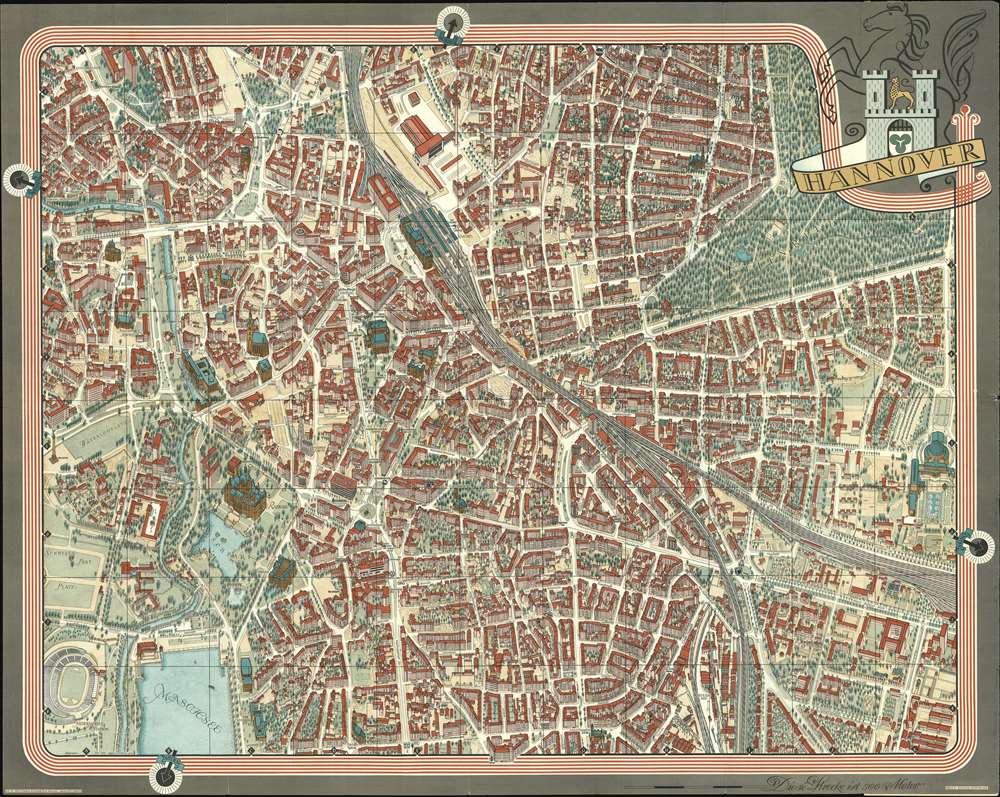 The Postwar revitalization of Hannover by one of the great 20th century cartographers.

This is Hermann Bollmann’s 1959 map of Hanover, Germany. Executed in Bollmann’s characteristic axonometric projection, this bird’s eye view (or as Bollmann called it, ‘helicopter perspective’) combines accurate mapmaking with the enhancement of both aerial and ground photography to create a clear yet realistic view of the city. Bollmann began producing such views in 1949, and by this time was approaching the prime of his career. Documenting the Cost of War, and the ‘German Economic Miracle’ Bollmann’s first post-war city plans he named Trümmerkarte, or ‘Debris Maps,’ for their focus was the damage done by Allied air raids during the war; his first of these was Brunswick, printed in 1949. These views showed the shells of bombed-out buildings, and blocks flattened by the raids. The 1955 Hannover, too, chronicled the war damage the city suffered. So it is notable the extent to which this 1959 edition of the same map records the reconstruction of the city. This 1959 edition was not just a reprinting. The view was updated, with new roads and construction appearing all over the city. Palaces like the Leineschloss, and Neustadter and Paulus Kirchen are shown rebuilt. Some blocks shown almost completely cleared in 1955 - such as the one south of Ostermannstrasse, and the neighborhoods directly northeast of the railway station - in 1959 show new buildings: apartments, offices, schools, and the notionally iconic VW Tower overlooking the Hamburger Allee – itself a boulevard which does not exist on the 1955 view. The view includes, in red dotted line, the prospective route of the equally-new Berliner Allee, which now merges into the Hamburger Allee. Other traces of the war - for example, the 1955 has barracks appearing on the grounds of the Schutzen Fest-Platz, site of Hanover’s annual marksman’s fun fair; on the 1959 these are removed leaving the fields clear, with only the existing Festival offices at the entrance to the Fest-Platz visible. Likewise at the corner of Klagesmarkt and Theodorstrasse, a block of barrack-style housing with a guard post entry appears on the 1955 view, on a lot which is clear on the 1959.

The revitalized content of the map is accompanied by a refreshing of the colors used in printing this 1959 edition, which is overall a richer and brighter palette than that used on 1955 map. The title of the map is shown on a banner in the upper right, and is surmounted by the arms of the city - which, as a dedicated map collector ought to know from the famous Bunting world map, are a cloverleaf.

Bollmann printed this first edition of this view in Germany in 1955; this issue was printed in 1959. Nine examples of this 1959 edition are listed in OCLC.