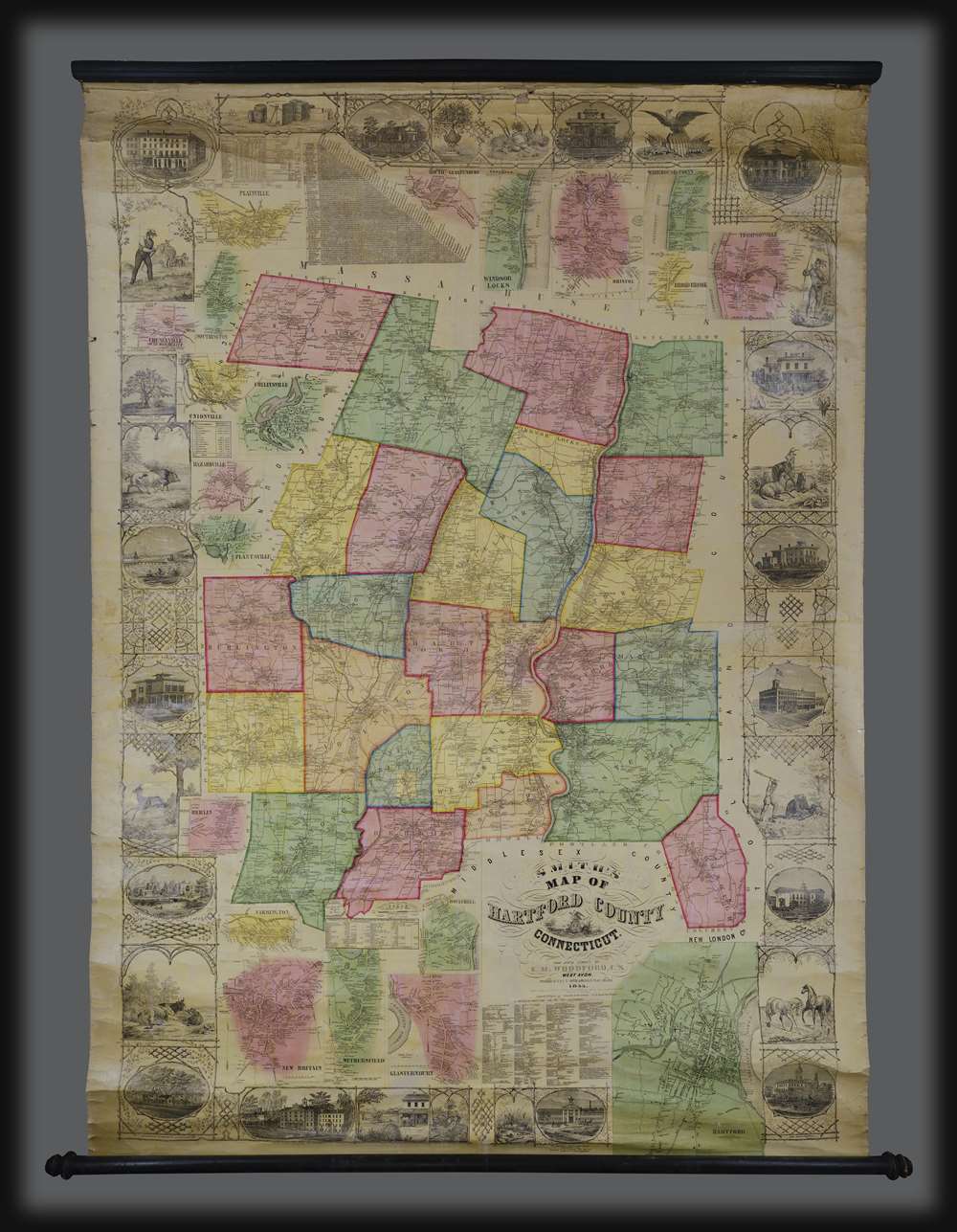 This is a rare and spectacular 1855 wall map of Hartford County, Connecticut by Edgar M. Woodford. Centered on the city of Hartford and the Connecticut River, this map covers the entire county and is color coded by township. Countless individual property holders and homes are identified throughout. The map features a wide decorative border with images of the State House in Hartford, State Normal School in New Britain, Connecticut Literary Institution in Suffield, the home of Col. A. G. Hazard in Enfield, the elegant Residence of Wm. H. Jones with View of Silk Factory, the Charter Oak, wildlife, and an Indian Warrior. Twenty insets surrounding the map are large and detailed town plans of Hartford, Farmington, Rockyhill, New Britain, Wethersfield, Glastonbury (Glastenbury), South Glastonbury (Glastenbury), Windsor Locks, Thompsonville, Broad Brook, Warehouse Point, Plainville, Cheneyville, Southington, Unionville, Collinsville, Hazardville, Plantsville, and Berlin.

This map was drawn based upon surveys completed by Edgar M. Woodford, an important Connecticut surveyor. It was engraved and printed by Wagner and McGuigan, and published by H. and C.T. Smith, both Philadelphia firms. Five examples are cataloged in OCLC which are part of the collections at the Connecticut Historical Society, Connecticut State Library, the Library of Congress, Pennsylvania State University, and the Osher Map Library at the University of Southern Maine.

OCLC 793203850. Stephenson, Land Ownership Maps: A Checklist of Nineteenth Century County Maps in the Library of Congresss, #60. Thompson, E., Maps of Connecticut for the Years of the Industrial Revolution, #164. Library of Congress, Map Division, G3783.H3G46 1855 .W6 TIL. Ristow, W., American Maps and Mapmakers:  Commercial Cartography in the Nineteenth Century, p. 388.
Looking for a high-resolution scan of this?