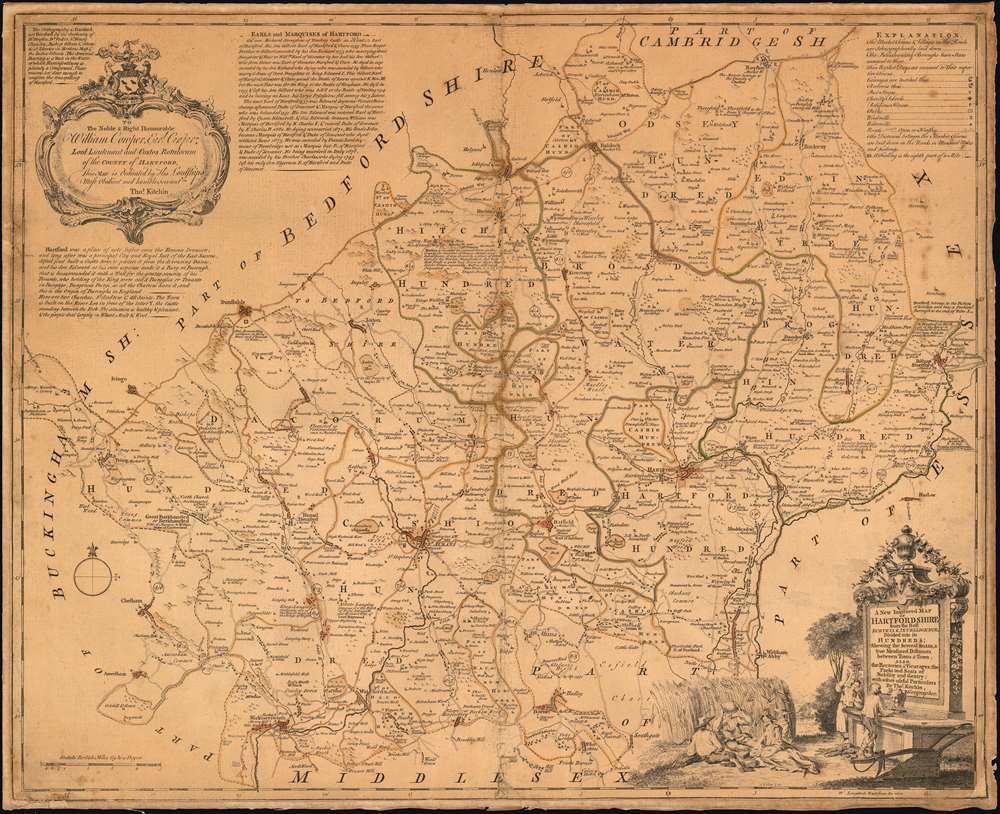 Detailed Map of a County Famed for its Barley and Beer
$250.00

A beautifully engraved 1749 Kitchin map of Hertfordshire, with a humorous decorative cartouche celebrating the region’s famed production of barley, malt, and beer. The map, based on the 1724 Payler Smith map of Middlesex, Hertfordshire and Essex, offers granular detail. Vicarages and Rectories, charity schools and religious houses are shown; post stages, parks, mills, and roads of varying quality are all identified. Beyond showing physical features, the map also notes the market days for each town, and notes the distances between market towns. Towns are also annotated to indicate their attachment to various noble titles, and to indicate particularly important trade goods. For example, the note for Hitchen explains:

it was formerly a place of great note for the Woolen Manufacture, but now that Trade is quite lost. However their Market for Grain, especially Malt is still much frequented.

The cartouche alludes to the Gin Craze - an epidemic of unchecked gin consumption afflicting Great Britain in the first half of the 18th century. It depicts a man and woman bellying up to a bar with a devil-headed spigot pouring gin into the man's outstretched hat. This is intended to be in sharp contrast to the adjoining picnic-scene of men and women, reclining on the ground next to a barley field, with a loaf of bread and a rack of ribs, guzzling beer directly from a keg. The gin-drinkers are dressed in slatternly tatters, while the beer-drinkers are neatly clothed and rosy-cheeked. Beer, after all, was considered to be the healthy alternative to the cheap gin flooding the London market, which was not infrequently flavored with turpentine.

Though engraved in 1749, Kitchen’s map did not receive publication until the completion of The Large English Atlas, published jointly with Emanuel Bowen in 1760. This work was the first large scale atlas of English counties since the atlases of Blaeu and Jansson a century earlier. The Atlas was reissued by various publishers, the maps unchanged, until c.1794.


Anthony Walker (March 19, 1726 - May 9, 1765) was a London draughtsman, etcher and engraver. He designed and executed decorative cartouches and title pages for the map trade. His work appeared in the Kitchin and Jefferys Small English Atlas, the Kitchin and Bowles Large English Atlas, and many separately issued maps, views, illustrations and trade-cards. Learn More...

OCLC 43184049. Hodson Printed Maps of Hertfordshire  ref. 36(v)
Looking for a high-resolution scan of this?