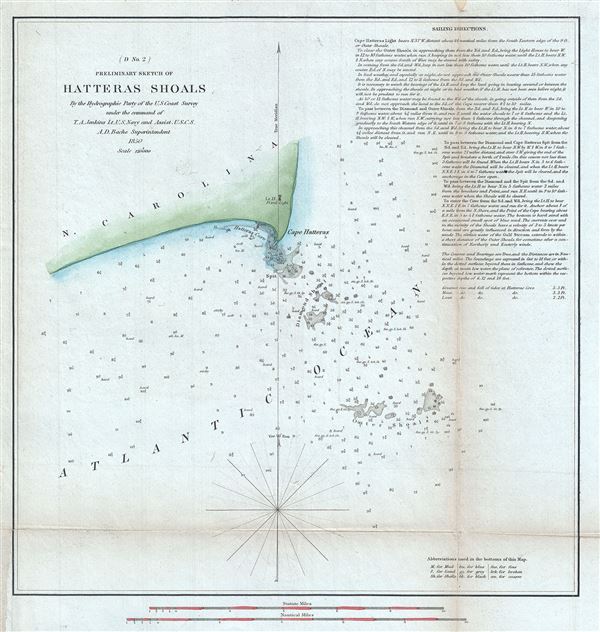 This is a fine example of the 1850 U. S. Coast Survey's nautical chart of Cape Hatteras on the Hatteras Island in North Carolina, and its surrounding shoals. It covers Cape Hatteras and Hatteras Cove and includes Diamond Shoal and the Outer Shoals.

Cape Hatteras is the furthest point to the east on the Hatteras Island and is also close to the meeting point of the two major Atlantic currents; the cold Labrador Current from the north and the warmer Gulf Stream from the south, causing rough seas and making navigation for ships difficult. This chart includes detailed sailing directions as well as numerous soundings to help navigate these rough waters. Because of the numerous ships that have been lost here, sailing close to the shoals and trying to navigate around the shifting sandbars, the area is also known as the 'Graveyard of the Atlantic.'

The old lighthouse, built in 1803 is noted on this chart. Prepared by T. A. Jenkins under the supervision of A. D. Bache, one of the most influential and prolific Superintendents of the Coast Survey, and issued in the 1850 edition of the Superintendent's Report.

Bache, A. D., Report of the Superintendent of the United States Coast Survey, (Washington) 1850.