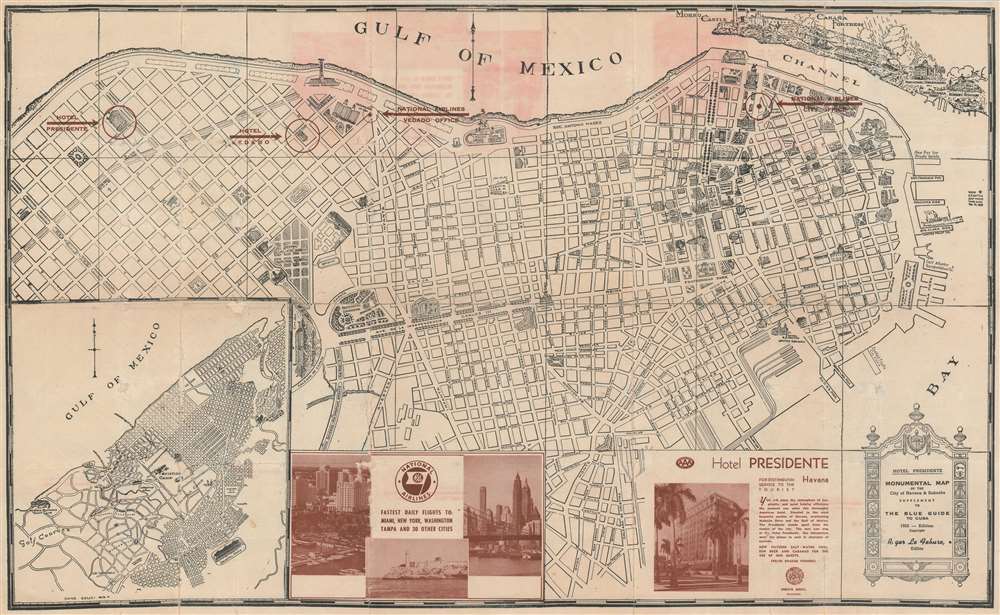 The 'Paris of the Caribbean' one year before the Communist takeover.
$175.00

This is a 1952 Roger Le Febure pictorial map of Havana, Cuba. Created as a supplement to The Blue Guide to Cuba, Le Febure employs the technique of illustrating Havana's most important tourist sites in profile, which was popularized by European cities like Paris and Rome in the late 19th century. Havana's castles and fortresses are depicted in this manner, along with the National Observatory, the Maine Monument, and numerous hotels, all of which are labeled. Red overprinted arrows emphasize the Hotel Presidente, the Hotel Vedado, the National Airlines Vedado Office, and the National Airlines City Office in downtown Havana. An inset map of the environs of Havana is situated in the lower left corner, next to advertisements for the National Airlines and the Hotel Presidente.

Dating from the year before Fidel Castro launched his armed revolt against the Cuban government, this map represents the glory days of Cuban-American relations when luminaries like Ernest Hemingway dined at the Flordita Hotel and sipped Mai Tai cocktails at Trader Vic's. Within the next ten years Cuba would transform, under Castro's harsh socialist reforms, from the 'Paris of the Caribbean' to an impoverished backwater.

Roger LeFebure (18xx - 19xx) was a French lawyer who lived in Havana during the early and mid-20th century. While in Havana, LeFebure edited and published The Blue Guide to Cuba from around 1932 until at least the mid 1950s. In the history of bilateral diplomatic relations between Romania and Cuba published on the Romanian Embassy in Cuba's website, it is mentioned that the first contact between the two countries came during the 1919 Paris Peace Conference after World War I and that it was decided to open an Honorary Consulate in Havana in the house owned by Roger LeFebure, who had been an officer in World War I. Learn More...

Average. Backed on archival tissue for stability. Exhibits wear and toning along original fold lines. Exhibits areas of infill. Text and printed images on verso.
Looking for a high-resolution scan of this?