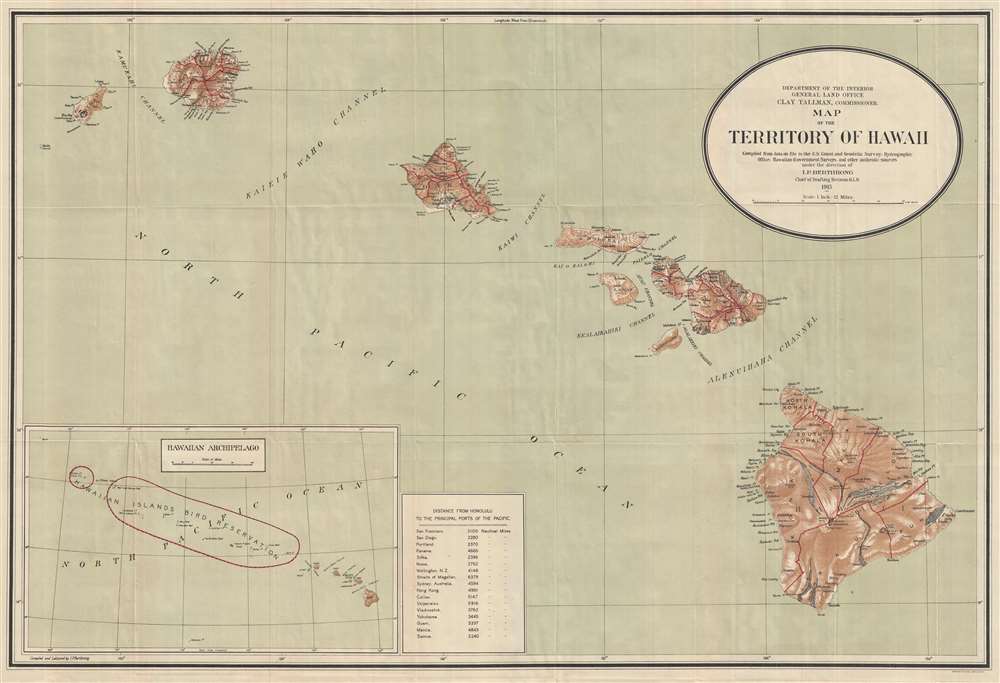 Outlines and labels the calderas of the Hawaiian volcanoes!

This is a 1915 I. P. Berthrong map of Hawaii. The map depicts eight of the Hawaiian Islands: Hawaii, Maui, Kahoolawe, Lanai, Molokai, Oahu, Kauai, and Nihau. Hawaii, Maui, Oahu, and Kauai are divided into regions. On the island of Hawaii, both Kilauea and Mauna Loa are labeled, as well as the Crater of Moku'āweoweo, the summit caldera of Mauna Loa. Several lava flows are illustrated. Rivers and towns are depicted on all the islands, as well as bays and harbors along their coasts. An inset map of the Hawaiian Archipelago is situated at the bottom left. This inset labels the Hawaiian Islands Bird Reservation, which includes all the smaller islands in the archipelago except for Midway Island. A table with distances to the 'principal ports of the Pacific' is placed next to the inset, and includes distances to San Francisco, San Diego, Nome, Wellington, Sydney, Hong Kong, Yokohama, and Manila, among others.

This map was produced under the direction of I. P. Berthrong for the Annual Reports of the Department of the Interior in 1915.