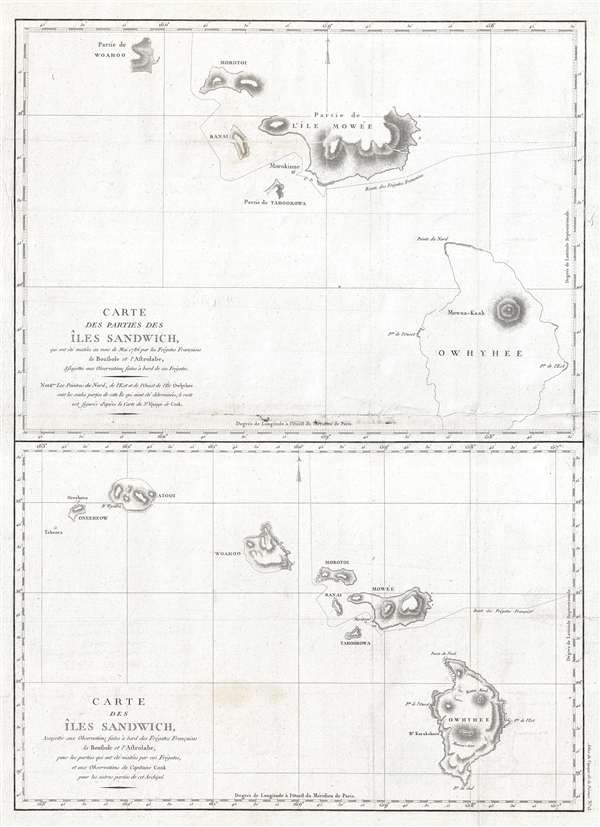 One of the best large format 18th century maps of Hawaii.

Messrs. Dagelet and Bernizet have taken with the greatest care all bearings of the part of Mowee along which we coasted, as well as those of Morokinne. It was impossible for the English, who never came nearer than ten leagues, to have given any exact information respecting these coasts. Br. Bernizet has drawn a very good plan, and Mr. Dagelet has joined astronomical observations, which deserve the same confidence as those of Cook, and which for the conveniency of the reader, are al inserted in tables at the end of the work. They show our course and precise situation from day to day, in latitude and longitude, by observation and by reckoning.

The language of La Pérouse cannot hide the fact that the French are trying, through La Pérouse, to match or outdo the outstanding exploratory accomplishments of the English under Cook. The second map, nonetheless, synthesizes the work of Bernizet and Cook to produce the most accurate and advanced mapping of the Hawaiian Islands yet. Despite a more advanced mapping, one cannot fail to notice the fact that all of the islands are foreshortened on the east west axis. There is no clear explanation, especially since it is not a feature copied for earlier work. Gary Fitzpatrick, in his Early Mapping of Hawai'I speculates that it may have something to do with the distance the French believed they could see from their ship. La Pérouse and his crew assumed they could see about 35 – 42 miles where as they could actually only see about 13 -14 miles. Such an erroneous assumption must have wrought havoc with their shipboard calculations, especially when they attempted to reconcile them with the discoveries of Cook.

La Pérouse, Bernizet, Dagelet, and the rest of the crew died tragically on a shipwreck near the Solomon Islands. His journals were shipped back to Europe from Australia before the shipwreck and posthumously published in 1797, along with an accompanying atlas volume, from which this map was drawn, Atlas du voyage de La Perouse.


Gérard Sébastien Bernizet (March 2, 1760 – May, 1788) was a French cartographer and geographical engineer. His best known for his work as chief cartographer on the La Perouse Expedition (1785 – 1789). Bernizet can be credited with many of the cartographic advances (and errors) associated with the expedition. The La Perouse expedition shipwrecked on the island of Vanikoro, part of the Santa Cruz group in the Solomon Islands. Although some of the sailors may have survived the initial shipwreck, none ever returned to Europe. The records of the La Perouse expedition survive because La Perouse prudently sent copies of his journals back to Europe onboard ad British Nave ship from the First Fleet (The Alexander) which he encountered en route. Learn More...

Very good. Some fold wear and soiling - see image at center. Else clean.