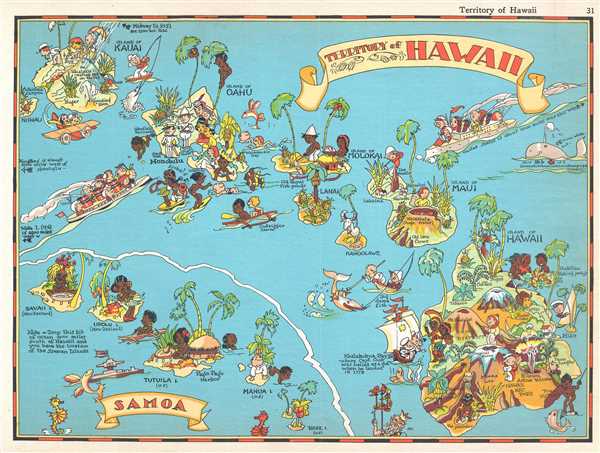 This is a 1935 Ruth Taylor White pictorial map or 'cartograph' of the Hawaiian Islands and Samoa. The map depicts the Hawaiian Islands of Hawaii, Maui, Molokai, Kahoolawe, Lanai, Oahu, Kauai, and part of Niihau. Four islands in the Samoa are depicted, including Manua and Tutuila, which were American possessions, and Upolu and Savaii, which were possessions of New Zealand. This 'cartograph' epitomizes the style and aesthetic of Ruth Taylor White, whose career as an artist and illustrator began with commissions of the Hawaiian Islands. These maps are not meant to be geographically exact, rather their goal is to entertain. This map effectively promotes Hawaii as a tourist destination, by giving its relative location to the United States as 2000 miles 'this way' below a steamer arriving with tourists. Popular locations around the islands, including Hawaii National Park and Pearl Harbor are labeled, along with Haleakala, Mauna Loa, Kilauea, and Mauna Kea. Cities such as Honolulu and Hilo are labeled as well. Tourist activities, such as big game fishing, surfing, and golfing are also illustrated. Tropical fauna, such as palm trees and pineapples, along with cash crops of sugar, coffee, tobacco, and sugar cane complete the aesthetic.

This pictorial map or 'cartograph' was published in Frank and Ruth Taylor's book Our U.S.A.: A Gay Geography.