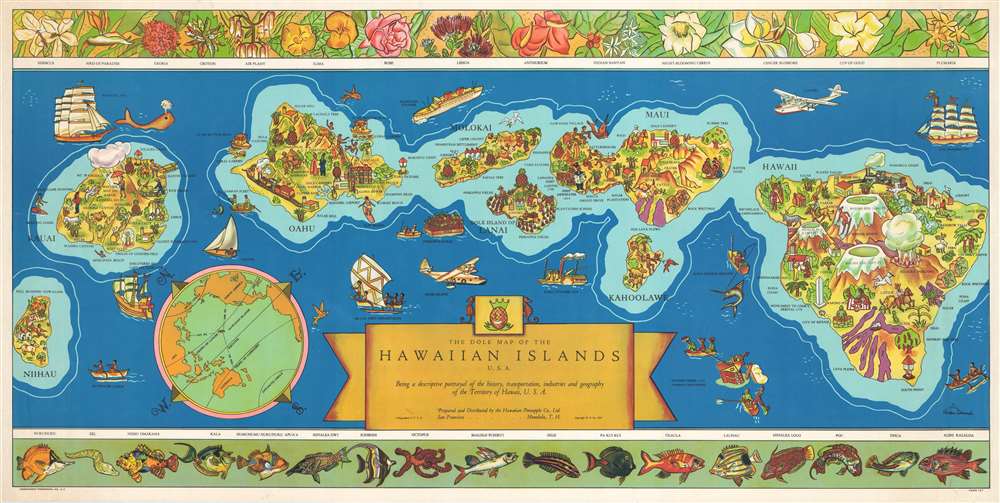 Iconic promotional map of Hawaii from its territorial period.

This is a 1937 pictorial map of the Hawaiian Archipelago drawn by Parker Edwards and issued by the Dole Pineapple Company. The map depicts the Hawaiian Islands of Hawaii, Maui, Kahoolawe, Lanai, Molokai, Oahu, Kauai, and Niihau. Pictorial vignettes decorate each of the islands and relate scenes of daily life, tourist 'attractions,' and Hawaiian history. On Hawaii, for example, each of the volcanoes is labeled (the elevations are given as well), along with the lava flows. Boats and Clipper aircraft are included. Pearl Harbor is labeled. Several aspects of Dole's operation in the islands, including pineapple plantations, Dole canneries, etc. also are depicted. The upper border includes drawings of Hawaiian flora, while the lower border highlights sea life native to the archipelago.

One of the most iconic pictorial maps of Hawaii from its territorial period, this is an early attempt to highlight the archipelago's wonders and draw tourists. This map was widely appreciated and inspired Dole to contract a second map of Hawaii in the same style in 1950. This map was printed 1937 by Independent Pressroom of San Francisco and stands as one of the most iconic maps of Hawaii published in the 20th century.