1833 Burritt - Huntington Map of the Heavens or A Celestial Planisphere 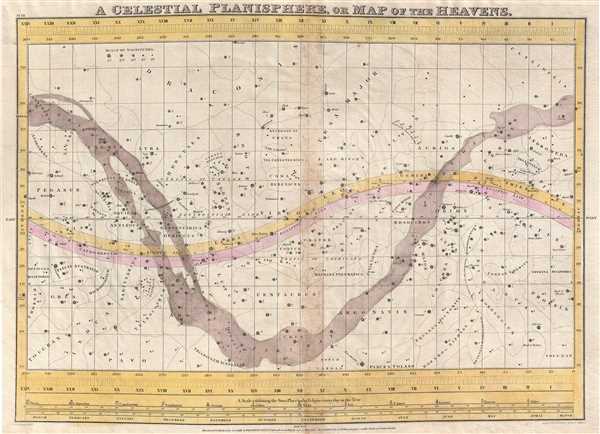 1833 Burritt - Huntington Map of the Heavens or A Celestial Planisphere

This is a rare and beautiful 1833 hand colored map of the night sky by Elijah Burritt. Centered on the ecliptic Line, this map identifies the various zones associated with each major constellation. The Milky Way is shaded. A scale exhibiting the sun's place in the ecliptic at various times of the year appears at the base of the map. This map, like all of Burritt's charts, is based on the celestial cartographic work of Ignace-Gaston Pardies and Johann Gabriel Doppelmayr.

The map was engraved Illman and Pilbrow under the direction of E. H. Burritt and issued as plate no. VII in the 1833 first edition of F. J. Huntington's Atlas, Designed to Illustrate the Geography of the Heavens. There are several editions of this atlas, the most common being the 1835 by Burritt. Only the earliest editions are colorized.

Thomas Illman (fl. c. 1824 – 1858) was an English engraver active in New York City during the early 19th century. Illman was born in England and attended Trinity College in Oxford where he attained a degree in theology. Despite initial religious fervor, he soon became an atheist. Professionally he turned to engraving to support his artistic tendencies. In London he mastered the engraver's art. His first paying work as an artist was illustrating for Thomas Carlyle's Confessions of an English Opium Eater. He relocated to New York City in 1828, almost immediately partnering with Edward Pilbrow to found the firm Illman and Pilbrow. Illman and Pillbrow were almost immediately hired by David H. Burr to engrave maps for his Universal Atlas, which he began working on in that year. When Burr took a position as topographer and cartographer for the United States Post Office, he ceded all remaining work on the Atlas to Illman and Pilbrow. In addition to his atlas work, Illman privately pursued his own art as well as engraved portraits and landscapes. He was admired as a skilled line, stipple, and mezzotint engraver. At some point he may have relocated to Philadelphia. His sons, H. Illman and G. Illman followed in his footsteps founding Illman Sons in 1845 Learn More...