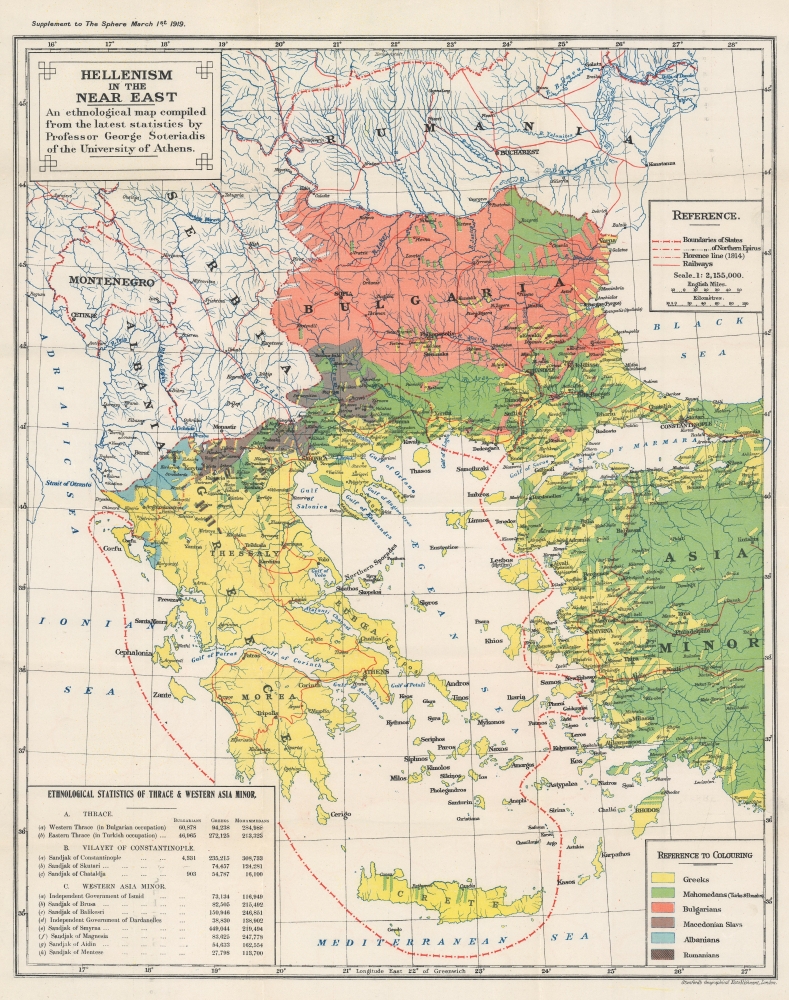 This is a 1919 George Soteriadis ethnological map of the eastern Balkans, Greece, and western Turkey. The map breaks down the ethnic divisions that have long balkanized the Balkans, leading to horrific ethnic clashes in the late 20th century.

Northern Epirus and the 'Florence Line'

The name Northern Epirus is mostly used by Greeks to reference parts of the historic region of Epirus that are now part of Albania. The term first appeared in 1913, after the Balkan Wars, following the creation of an independent Albanian state. The Florentine Line is a reference to the Protocol of Florence, part of the 1913 Treaty of London that delineated the boundaries of the new Albanian state. The incorporation of the region (which many Greeks viewed as being culturally, geographically, and historically linked to Greece and the ancient Greek region of Epirus) into Albania created a fervor among the substantial ethnic Greek population in Northern Epirus. These ethnic Greeks declared the Autonomous Republic of Northern Epirus in 1914, which was officially recognized as an autonomous region within Albania by the Protocol of Corfu. When Albania collapsed in July 1914, at the beginning of World War I, the Greek Army occupied Northern Epirus. At the end of the war, even though the Greeks lobbied to annex Northern Epirus, the region reverted to Albanian control. The ethnically driven unrest and violence between the Albanian government and Greek population continued into the 21st century.

This map was created by George Soteriadis and published as a supplement to the March 1, 1919, edition of The Sphere. A previous edition, published separately by the Stanford Geographical Establishment, was issued in 1918. We note four examples of the present edition in OCLC: the University of Toronto, the National Library of Israel, the University of California Berkeley, and the University of Oxford.

George Soteriadis (1852 - 1942) was a professor of history at the University of Athens. In the 1930s, Soteriadis undertook archaeological expeditions in the Marathon region of Greece. Learn More...

The Sphere, Supplement, March 1, 1919.     The Sphere (January 27, 1900 - June 27, 1964), formally known as The Sphere: An Illustrated Newspaper for the Home and later The Sphere: The Empire's Illustrated Weekly was a British newspaper. Launched at the height of the Boer War by London Illustrated Newspapers, The Sphere competed directly with two other newspapers: The Graphic and Illustrated London News. The Sphere published news from Britain and around the world, since its target audiece was British subjects living in the colonies. A total of 3,343 issuese were published, plus a special edition published in January 1965 entitled Winston Churchill: A Memorial Tribute. Two institutions, the British Library and the National Library of Scotland, hold copies of the entire print run of the newspaper.