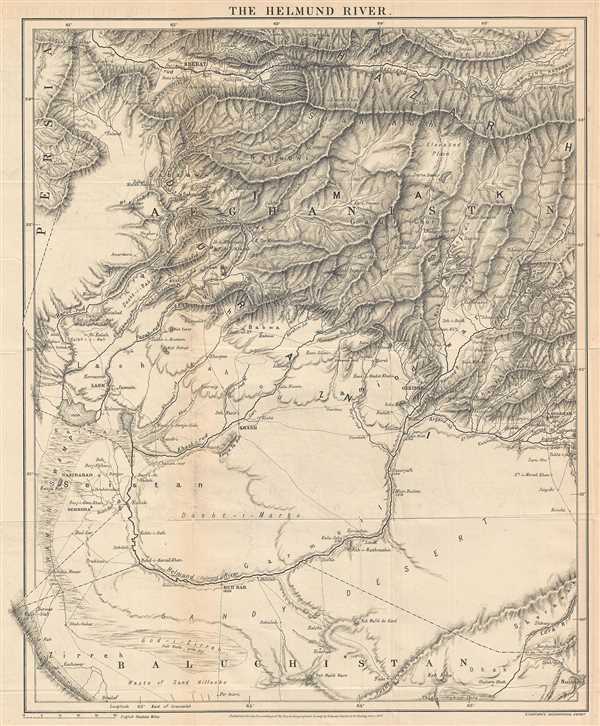 This is a rare 1879 Sir Clements Robert Markham map of Afghanistan and Pakistan. This map illustrates southwestern Afghanistan and northwestern Pakistan (Baluchistan) and parts of extreme eastern Iran (Persia), including the Hindu Kush (Koh-i-Baba), the Sadif-Koh (White mountains), the Siah-Koh, the Paghman range, the Gul-Koh, the Toba, and Khoja-Amran mountains. This is a very detailed map and details the topography of the region beautifully. The map traces the route of the Helmand (Helmund) River, which is shown prominently in the lower third of the map. Other rivers are labeled and roads are shown. Kandahar is on the lower right at the foot of the mountains. Most of the mountain ranges are labeled.

The western portion of Afghanistan, which includes the inland basin of the River Helmund, and the smaller inland basin of the Abistada Lake. It is comprised in one of those river systems without any outlet to the sea, which occupy a vast area in the interior of Asia, where the drainage flowing from a circle or semicircle of mountains is formed into a lake or morass at the lowest level it can reach. Such are the basins of the Caspian and the Aral, of the Balkhash and Baikal, of Lake Lob and the Tibetan Plateau, and of the Helmund and the Abistada Lake …

This map accompanied C.R. Markham's paper 'The Basin of the Helmud' in the Proceedings of the Royal Geographical Society and Monthly Record of Geography,Vol. 1, No.3. It was published by Stanford's Geographical Establishment.

Markham, C.R., The Basin of the Helmund, in Proceedings of the Royal Geographical Society and Monthly Record of Geography Vol.1, No. 3, March 1879.