1780 Raynal and Bonne Map of the Two Hemispheres 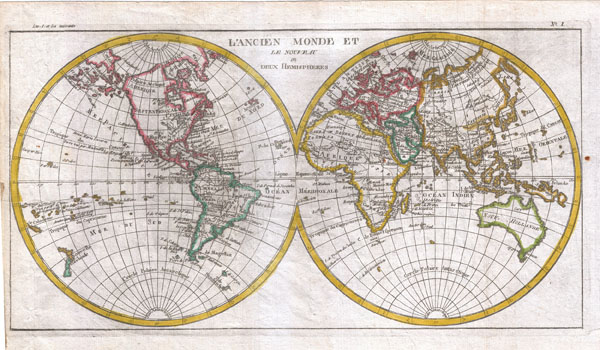 1780 Raynal and Bonne Map of the Two Hemispheres

A fine example of Rigobert Bonne and G. Raynal's 1780 map of the world on a hemispherical projection. Offers a number of interesting details corresponding to the knowledge of the world at the time. Western North America exhibits a pre-Cook configuration with a curious archipelago that can be understood as a proto-understanding of the Aleutian Islands. On the opposite side of the world Tasmania is joined to the mainland of Australia. Neither Antarctica (which had yet to be discovered) nor the mythical Terre Australis appear in the southern latitudes - a significant advancement in the cartographic perspective of the region. Otherwise this is a fairly accurate picture of the Earth. Drawn by R. Bonne for G. Raynal's Atlas de Toutes les Parties Connues du Globe Terrestre, Dressé pour l'Histoire Philosophique et Politique des Établissemens et du Commerce des Européens dans les Deux Indes.