1839 Mitchell Map of the World in Hemispheres (Northern, Southern, Eastern and Western) 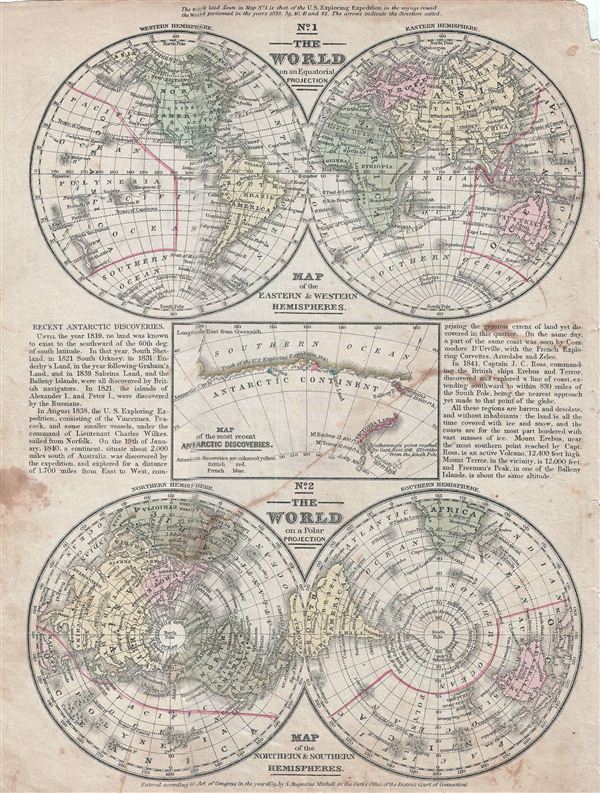 1839 Mitchell Map of the World in Hemispheres (Northern, Southern, Eastern and Western)

This is an example of Mitchell's 1839 map of the World in hemispheres. Divided into three separate maps, the first map details the world on an equatorial projection, covering the Western and eastern Hemispheres. The route of the 'U.S. exploring expedition' in the years 1838 – 1842 is noted. The second map features the world on a polar projection featuring the Southern and the Northern Hemispheres. Maps are coded according to continents, countries are named but boundaries are not shown. Various important cities, rivers, deserts, and several other topographical details are noted. The third map details the Antarctic continent according to the latest discoveries of the time. Notes the southernmost point reached by Ross in 1841 (830 miles from the South Pole). This map is color coded according to discoveries made by the America, British and French explorers. Text on each side of the map notes the progress of discoveries made on the Antarctic continent from 1819 to 1841. Map is dated and copyrighted 'entered according to Act of Congress in the year 1852 by S. Augustus Mitchell in the Clerk's Office of the District Court of the eastern district of Pennsylvania.'

Good. Some spotting at various places. Overall toning. Narrow top and bottom margins. Blank on verso with erased pencil marks.
Looking for a high-resolution scan of this?