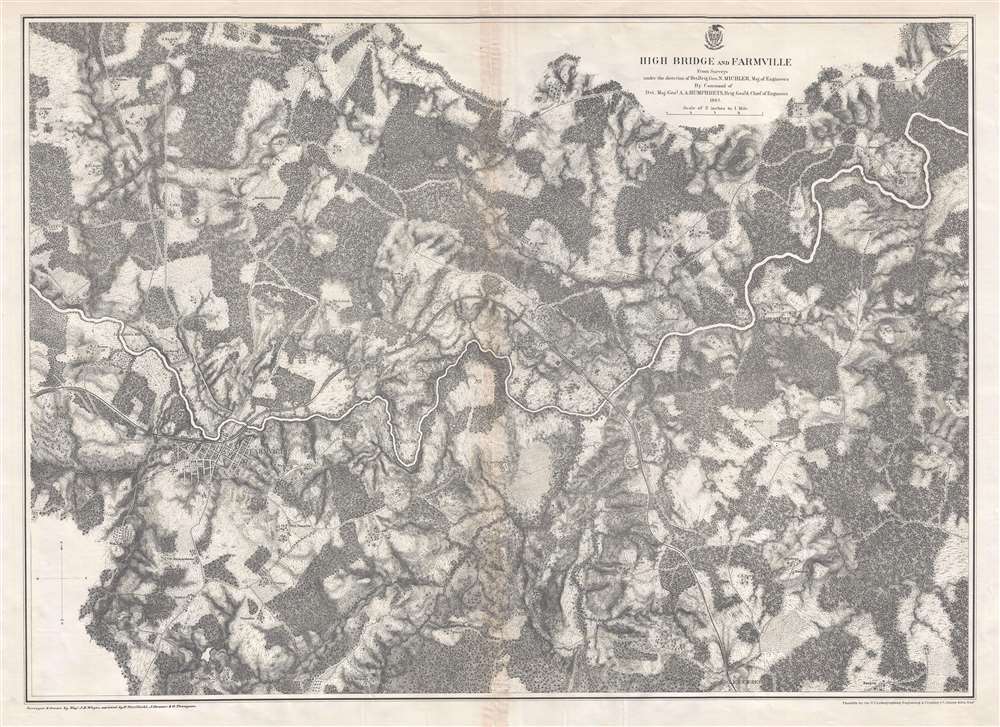 A battle during Lee's retreat from Richmond concerning two key bridges across the Appomattox River.

This is an 1867 John Weyss and Nathaniel Michler map of the battlefield of High Bridge, Virginia. The map depicts the region from the farmstead of A. Adams to the Parkinson homestead and from the home of H. Burt to Rice's Depot. Numerous homesteads, farmsteads, churches, and mills are identified, along with Farmville and Jamestown (both of which are situated along the Appomattox River), and Rice's Depot. Numerous roads, including the Agola Road, traverse the region and the South Side Railroad crosses most of the map from Rice's Depot near the bottom border to Farmville and then continues on to the left.

The Battle of High Bridge

The Battle of High Bridge was a series of two engagements near the end of the Appomattox Campaign that were fought about four miles northeast of Farmville on April 6 and April 7, 1865. Part of the General Lee's retreat from Richmond and his effort to join General Joseph E. Johnston's force in North Carolina, the battle surrounded the Confederate fight to secure the South Side Railroad's High Bridge across the Appomattox River and the lower wagon bridge so as to ease their retreat. A large Union Army raiding party intended to destroy the bridges before the Confederates could cross the river, but instead were surrounded by the Confederate army and either killed, wounded, or captured. After successfully crossing the Appomattox, the Confederates attempted to burn both bridges to hinder the Union Army's pursuit. They successfully rendered the High Bridge unusable, but the Union forces were able to save the wagon bridge and used it to continue their relentless pursuit of Lee and his army.