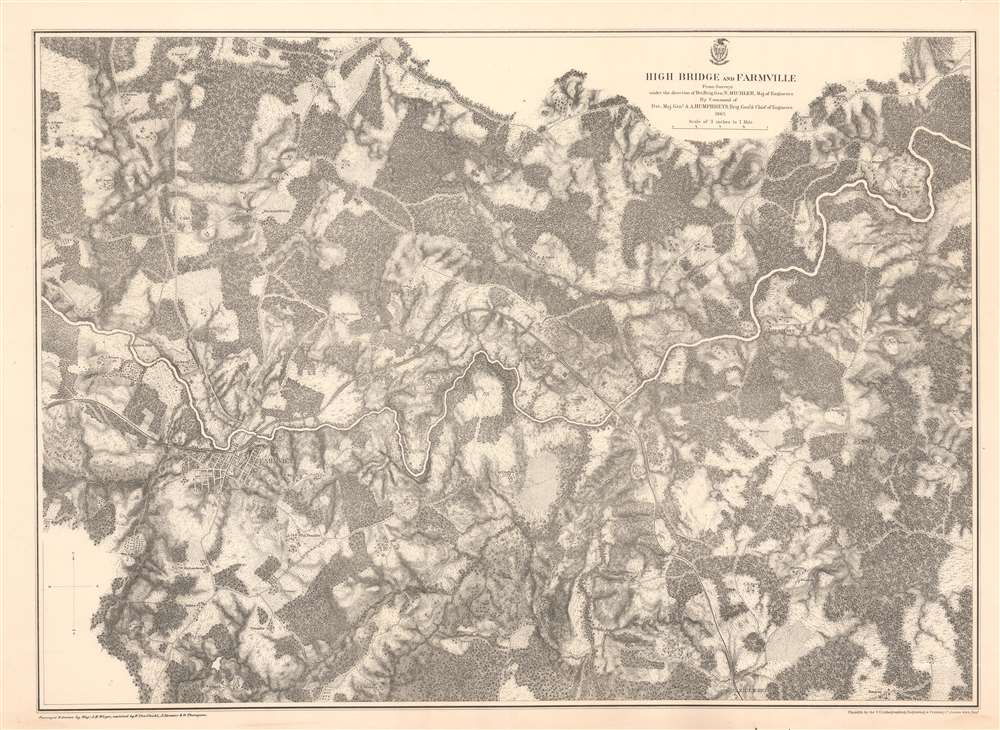 This is an 1867 John Weyss and Nathaniel Michler map of the Battle of High Bridge, Virginia (1865) - a late American Civil War (1861- 1865) engagement of the Appomattox Campaign. The map depicts the region from the farmstead of A. Adams to the Parkinson homestead and from the home of H. Burt to Rice's Depot. Numerous other homesteads, farmsteads, churches, and mills are identified, along with Farmville and Jamestown on the Appomattox River, and Rice's Depot. The map highlights roads in the region, including the important Agola Road.

The Battle of High Bridge

The Battle of High Bridge was a series of two engagements near the end of the Appomattox Campaign. They were fought four miles northeast of Farmville on April 6 and 7, 1865, in the final days of the war. The battles were part of General Robert E. Lee's retreat from Richmond and his effort to join General Joseph E. Johnston's force in North Carolina. The action focused on Confederate attempts to secure the South Side Railroad's 'High Bridge' as well as the lower wagon bridge, both crossing the Appomattox, so as to ease their retreat. A large Union raiding party intending to destroy the bridges was soundly defeated by the larger retreating Confederate force. After successfully crossing the Appomattox, the Confederates attempted to burn both bridges to hinder Union pursuit. They successfully sabotaged the High Bridge, but the Union forces were able to save the wagon bridge and used it to continue their pursuit of Lee and his army.

This map was surveyed and drawn by Major John E. Weyss under the command of Nathaniel Michler, engraved by Julius Bien, and published by the War Department in Military Maps illustrating the Operations of the Armies of the Potomac and James in 1869. While this map is well represented in institutional collections, it is rare on the private market.