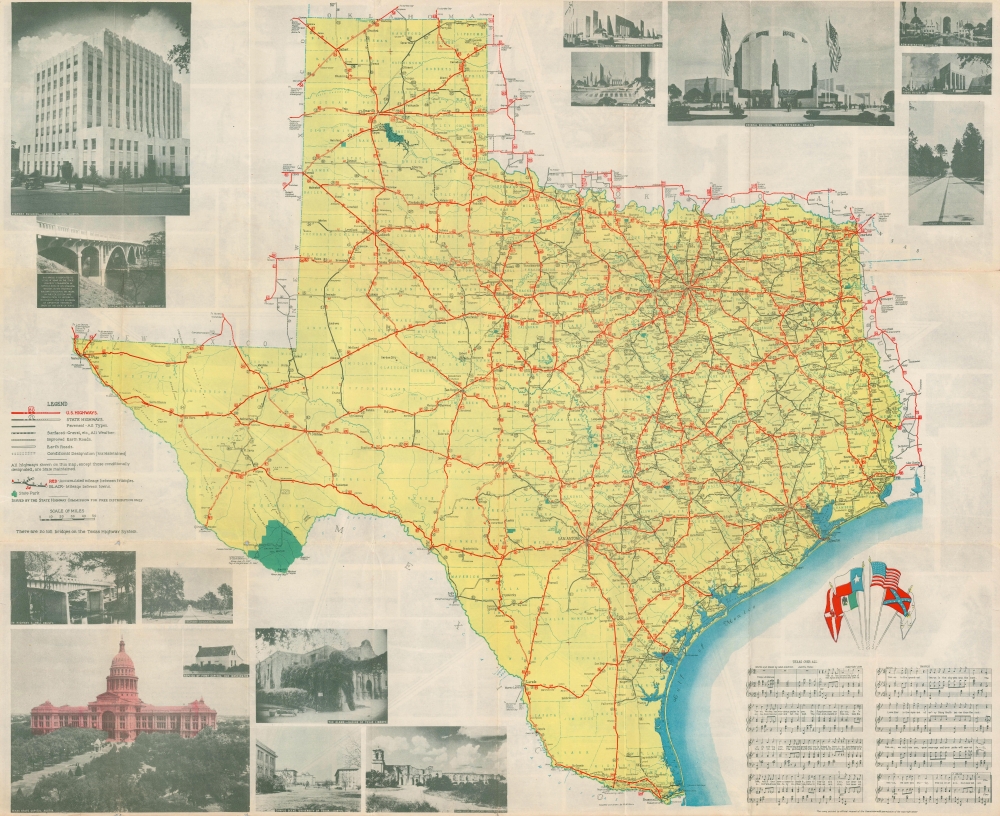 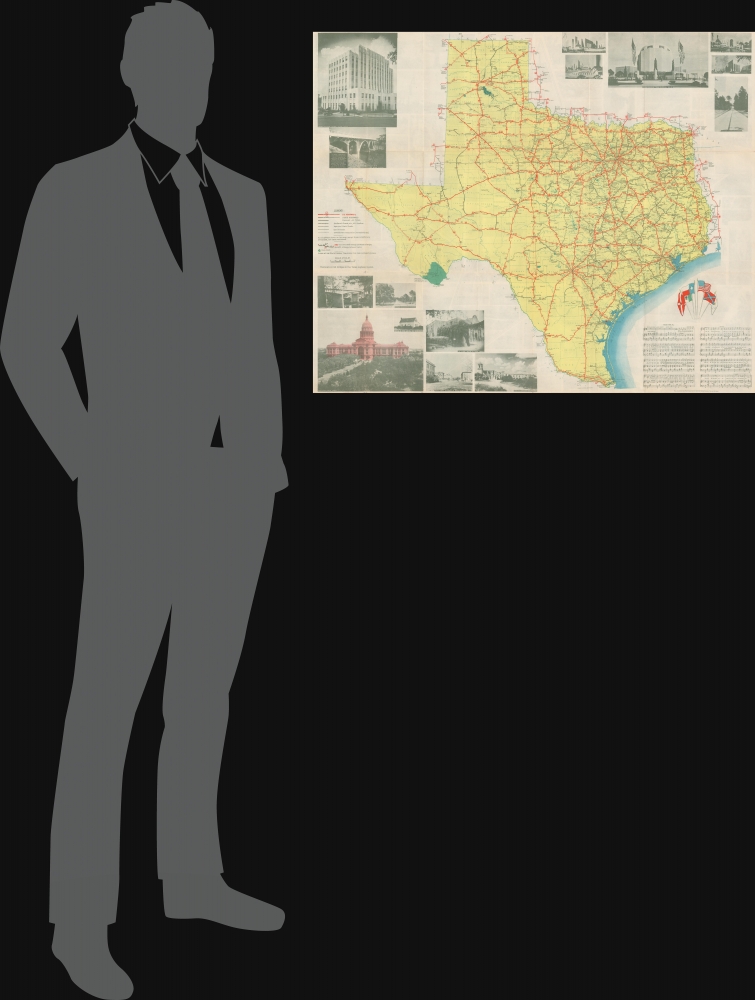 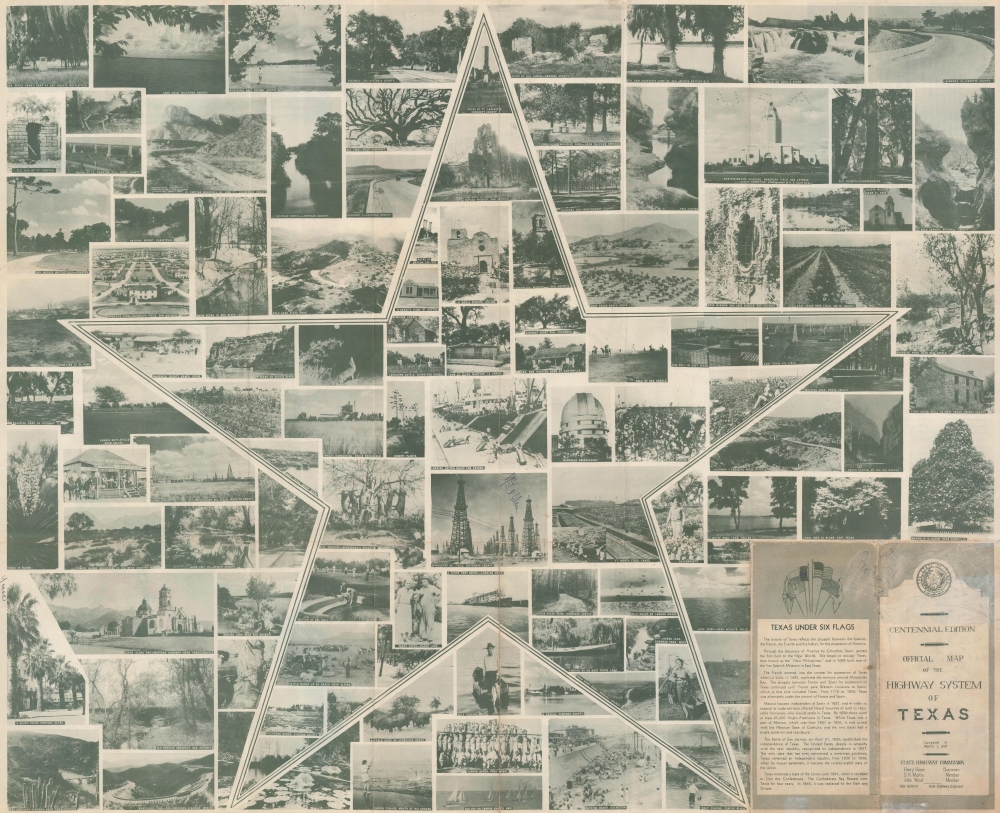 The first illustrated highway map published by the Texas Highway Department. This is the 1936 R. M. Stene pictorial highway map of Texas, created to welcome tourists visiting Texas to celebrate the centennial of the 1836 Texas Revolution and Independence. Various coding marks road type and grade, breaking out U.S. highways and Texas state highways, as well as paved, gravel, and improved earth, and unimproved roads. Cities and towns are labeled throughout, and the map offers distances between cities and towns. Printed photographs of The Alamo, the University of Texas - Austin, the Texas State Capitol, the San Jose Mission in San Antonio, and scenes from the Centennial Exposition adorn the corners. The music for Texas Over All and the six flags that have flown over Texas are situated in the lower right. A collage of printed photographs appears on the verso.

R.M. Stene and the Texas Highway Department spent over a year developing this map and it is the first illustrated highway map published by the department. R. M. Stene worked over 300 hours of overtime ro produce this map.

The Texas Centennial Exposition was a world's fair and took place from June 6 through November 29, 1936, at Fair Park in Dallas. The fair celebrated the 100th anniversary of Texas's independence from Mexico and was visited by over 6.3 million people.

This map was created by Robert Martin Stene and published by the Texas Highway Department in 1936. We note just fifteen examples in OCLC.

Robert Martin Stene (May 23, 1872 - August 10, 1954) was an American cartographer and photographer. Born on a farm outside Norway Lake, Minnesota, his first job was as a station agent for the Great Northern Railway in Norway Lake. Then, in Fargo, North Dakota, he worked for the Hanson Studio, where he demonstrated a gift for operating a telegraph. This earned him a job as a telegraph operator. He moved to Texas for his health sometime before 1900 and settled in Austin where he worked as a photographer in Journey's Studio. Stene then worked as an advertising agent and telegraph operator for the Santa Fe railroad in Dallas and Galveston for several years before moving to San Francisco to study mapping. From there he joined mining engineers in Arizona and California as a map draftsman. Then, Stene started working as a hydraulic and mining engineer in Arizona, where he surveyed rivers and canyons for dam sites. He also founded a mining company to mine copper in Arizona. At some point during his time in Arizona, Stene organized the Williams River Corporation with the goal of building a dam and generating electricity. Unfortunately for Stene, after he had done the work to find financiers and supporters to build the dam, the project became public, and a different company was formed that took over the project. Stene was out and lost everything. At this point, around 1927, he moved back to Texas and joined the Texas Highway Department as a cartographer. He retired from the Highway Department in 1950. Learn More...